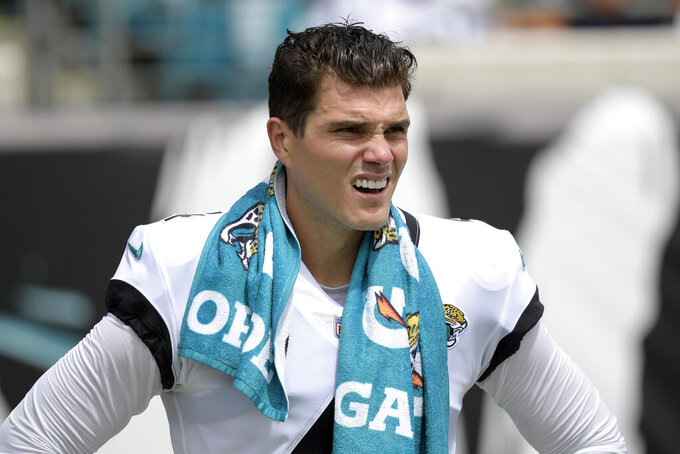 Jacksonville Jaguars place kicker Josh Lambo (4) watches from the sideline during the first half of an NFL football game against the Denver Broncos, Sept. 19, 2021, in Jacksonville, Fla. A judge has dismissed Lambo's lawsuit against the Jacksonville Jaguars in which he sought back pay and damages for emotional distress caused by former head coach Urban Meyer. Judge Gilbert Feltel Jr., of the Florida 4th Circuit Court in Duval County, dismissed the suit without prejudice on Nov. 8. He gave Lambo 21 days to amend and refile the complaint. Lambo's attorney, Betsy Brown, said Wednesday, Nov. 16, 2022 she intends to do so. (AP Photo/Phelan M. Ebenhack)

Judge Gilbert Feltel Jr., of the Florida 4th Circuit Court in Duval County, dismissed the suit without prejudice on Nov. 8. He gave Lambo 21 days to amend and refile the complaint. Lambo's attorney, Betsy Brown, said Wednesday she intends to do so.

The Jaguars filed a motion to dismiss in July, arguing that Lambo's suit did not fall under the Florida Whistleblower Act. The team said Lambo was not a whistleblower or a victim of retaliation, adding that he was released because of “his unsatisfactory performance on the football field.”

The team also argued that while Lambo's suit alleges wrongdoing on Meyer's part, it fails to show Meyer's actions were committed within the scope of his employment or ratified by the team.

Lambo sued the Jaguars in May, claiming Meyer and the team created a hostile work environment. According to the lawsuit, Lambo says his performance suffered as a result of being kicked and verbally abused by Meyer.

Lambo had been seeking a jury trial and back pay owed from his 2021 salary ($3.5 million) with interest as well as “compensation for any special damages sustained as emotional stress and reputational harm and litigation fees," among other costs.

The Jaguars fired Meyer on Dec. 15, 2021, hours after a Florida newspaper reported Meyer had kicked Lambo during a practice months earlier. Meyer was fired with cause, although the team insists Lambo’s accusation had nothing to do with owner Shad Khan’s decision to end one of the most tumultuous coaching tenures in NFL history.

Lambo, one of the most accurate kickers in NFL history, missed a field goal in each of Jacksonville’s first two preseason games in 2021. In a practice before the final exhibition game at Dallas in August, Lambo says he was stretching when Meyer approached him, kicked him in the leg and said, “Hey (expletive), make your (expletive) kicks!”

Lambo says he told Meyer to never strike him again, but Meyer responded with, “I’m the head ball coach. I’ll kick you whenever the (expletive) I want.”

Lambo is scheduled to make his first NFL appearance since Jacksonville released him when Tennessee plays at Green Bay on Thursday night. The Titans promoted Lambo from the practice squad to replace the injured Randy Bullock.