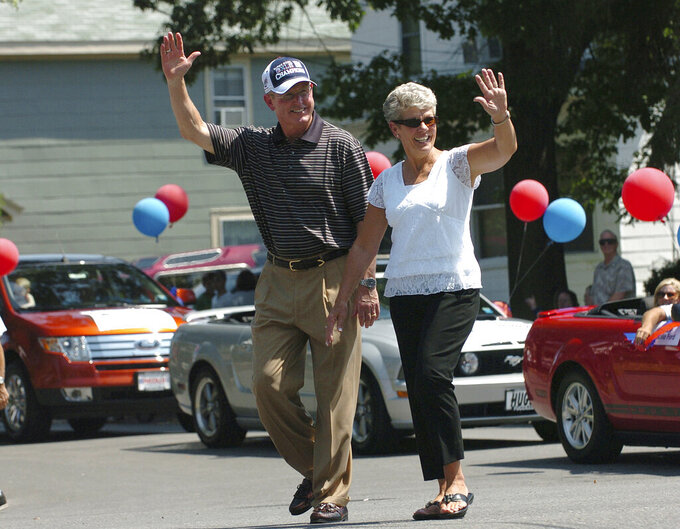 FILE - New York Giants football coach Tom Coughlin and his wife, Judy, walk down Main Street in Waterloo, N.Y., July 12, 2008, during a parade to honor the coach of the Super Bowl-winning team. Both are from Waterloo. The wife of two-time Super Bowl-winning coach Tom Coughlin died early Wednesday, Nov. 2, 2022, after a lengthy battled with an uncurable brain disorder. Coughlin and his family released a statement announcing the death of Judy Whitaker Coughlin. She was 77. (Frank Ordonez/The Post-Standard via AP)

Coughlin and his family released a statement announcing the death of Judy Whitaker Coughlin. She was 77.

Coughlin, who was Jacksonville's first head coach in 1995 before leading the Giants to Super Bowl championships in 2008 and 2012, revealed last year that his wife had been diagnosed with progressive supranuclear palsy.

“Judy was a remarkable woman in every way,” the statement read. “She lived a life filled with love and unselfishly gave her heart and soul to others. Judy made you feel like an old friend from the first hug to the last.

“She was mother to all on and off the field. For everyone who knew and loved Judy, the enormity of her absence cannot be put into words, but the immense kindness she showed to others will always endure. Our hearts are broken, but we know she is free from suffering and at peace with our Lord.”

Judy Coughlin had been in hospice care in Atlantic Beach, a few miles south of Jacksonville.

“She was an incredibly bright light for all of us, and we were blessed that she shared her energy, vitality and love with our organization,” Giants co-owners John Mara and Steve Tisch said in a statement. “As Tom has often noted, his role as head coach ended at the front porch. When he walked through the door, Judy was the boss. Our thoughts are with Tom and the entire Coughlin family.”

Judy was a key cog in the establishment of the Tom Coughlin Jay Fund, which supports families with children battling cancer. In more than 25 years, the Jay Fund has helped more than 5,000 families and given away more than $16 million in grants helping thousands of families in Northeast Florida and the New York/New Jersey Metropolitan Area.

The Giants released a video tribute to Judy that highlighted her work with children with cancer.

Judy and Tom kept their home in the Jacksonville area even after he took the job with the Giants and were nearby when Jaguars owner Shad Khan reached out to bring Coughlin back as the team's executive vice president in 2017. With Coughlin calling the shots, Jacksonville made its first playoff appearance in a decade and advanced to the AFC title game before losing to New England.

“It was a privilege for me to know Judy Coughlin, if only for a short while,” Khan said. “Judy was everything I had been told to expect when her husband Tom returned to the Jaguars in 2017 — kind, energetic, optimistic and an inspiration.

"I personally saw the love and support Tom had for Judy, so I am saddened for Tom, his family and everyone who was positively impacted by Judy here in Jacksonville and beyond. Judy was truly a force for good and will be deeply missed by all.”