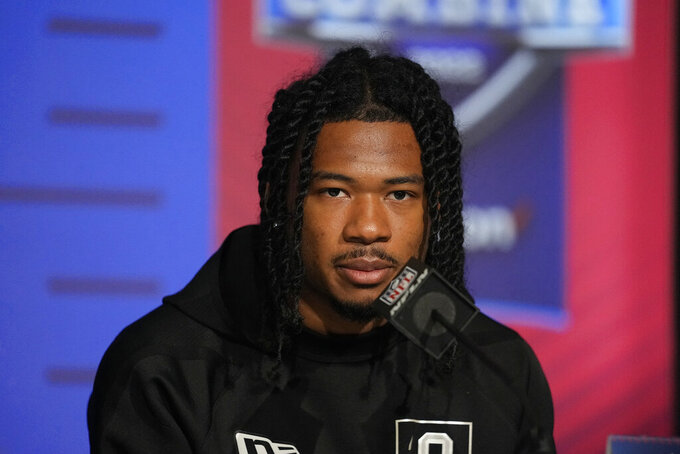 Both excelled at other sports before trying football. Both emerged as star defensive ends in the Big Ten. And when each moved to America at age 13, neither knew much about the sport — or career path — that would change their lives.

Roughly a decade later, Karlaftis and Ebiketie are both in Indianapolis, showing everyone that kids from around the world still can achieve their dreams in America.

“I didn't know anything about the game — what a first down was, how to get in a stance or how to throw a spiral,” said Karlaftis, who grew up in Greece. “I had to rely on my instincts. It took me about a year to figure it out, but I could see I was physically dominating my friends on the field, so I thought I'd try it out.”

Purdue couldn't have been happier with the results. Penn State was similarly pleased when it got Ebiketie for his final college season after the Cameroon native started at Temple.

And with the draft nearing, Karlaftis and Ebiketie are quickly emerging as something bigger than just potential first-round picks. They're among the faces of the NFL's expanding global reach.

At recent combines, the participant list has been sprinkled with athletes from around the world. But this year's class may be larger, more talented and covers a broader portion of the globe.

Defensive end/linebacker David Ojabo was born in Nigeria and lived in Scotland before landing at Blair Academy in New Jersey and eventually Michigan.

Then there's John Metchie III, the Alabama receiver who was born in Taiwan, moved to Ghana and later to Canada before honing his football skills at a Maryland high school. The experiences have taught Metchie and others lessons that go beyond football.

The transition from a purely American game to one with foreign connections didn't happen by chance. League officials long ago mapped out a plan that included playing regular-season games in London and Mexico City. Munich joins the international series this fall and Tokyo has hosted preseason games.

Some mock drafts list Metchie, Ojabo and Raimann — along with Ebiketie and Karlaftis — as first-round prospects. Faalele, who was measured at 6-foot-8, 384 pounds, and Luketa are likely second-day picks.

Don't expect the international train to stop anytime soon, either. Luketa, a teammate of Metchie's on Team Ottawa, hopes to join Los Angeles Chargers receiver Josh Palmer and Carolina running back Chuba Hubbard as fellow Canadians on NFL rosters. More, he believes, are on the way.

“We're everywhere,” Luketa said. “The talent in Canada is untapped. Being able to be in this position and shine that light over back home is everything. It’s so much bigger than us. There is so much talent in Canada but it's not given the same opportunity.”

Perhaps it's because not everyone follows the traditional journey.

Ojabo, for instance, played soccer and basketball before trying football. Raimann competed in soccer until age 14. Karlaftis was such a strong water polo player he made the Greek national team and stayed behind to finish the season before leaving for West Lafayette, Indiana, to be reunited with his family following the sudden death of his father.

And after Ebiketie's father was assigned to the country's American embassy, the 6-2, 250-pound pass rusher played basketball and competed in sprints and the high jump before blossoming into a top-flight football player.

Each now has a chance to expose others to the sport they've embraced by taking one more step in their surprising journeys.

“The first time I tried football was my sophomore year of high school,” Ebiketie said. “I was a natural athlete so that wasn't a problem. The biggest thing was learning the rules and once I learned the rules, everything sort of took care of itself.”