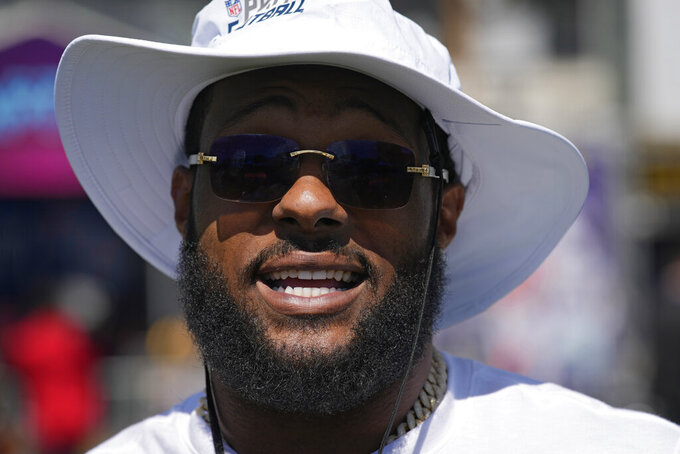 Kayvon Thibodeaux speaks with the media ahead of the NFL draft Wednesday, April 27, 2022, in Las Vegas. (AP Photo/John Locher)

Kayvon Thibodeaux doesn’t lack any confidence, already proclaiming himself the best player in the NFL draft.

The All-American defensive end from Oregon already talks like an All-Pro. He can go anywhere in the top 10 after initial projections had him as the potential No. 1 pick Thursday night.

Ohio State star receiver Garrett Wilson has a quieter confidence. He could be the skill position player selected in the first round or he may slide into the 10-15 range.

There’s no consensus in this NFL draft but after months of projections and analysis, it’s time for teams to actually make their picks.

Thibodeaux and Wilson are two of the 21 prospects in Las Vegas eager to hear their name called by Commissioner Roger Goodell.

Both young men are ready to begin their pro career.

“I feel like the only way to have pure confidence is to know that you’re prepared,” Thibodeaux said on the AP Pro Football Podcast. “So for me, I love to prepare and I love to make sure that I have all the tools and everything that I need going into whatever situation. So just having that preparation and doing the things that it takes to build that self-confidence and to kind of push forward, and knowing that I can, instead of trying to rise to the occasion, I can follow my preparation.”

The 6-foot-5, 258-pound Thibodeaux had seven sacks last season despite missing 2 1/2 games with a sprained ankle that slowed him through some other games. He’s already tired of anonymous reports questioning his consistency and desire to play.

“No negative questions,” Thibodeaux said, stopping an inquiry about how his positive energy can be infectious in the locker room.

“I think that’s one thing that carries me with my teammates is that not only am I very confident in them, but I believe in them, and I kind of articulate that,” he said. “So just being able to let the guys know around me that I believe in them and create that trust and that camaraderie within the locker room and really get to know each other. Even though it is a business, we do have to create a family to get to that greater good so just kind of buying into that culture and have a guy know that I believe in them and I want them to believe me.”

Fellow edge rushers Aidan Hutchinson and Travon Walker could be the first two picks in the draft while Thibodeaux may be heading to New York — the Jets and Giants own four picks combined among the top 10.

“I truly don’t have a preference on where I go just because I know God has a plan for my legacy,” Thibodeaux said. “And I know that as long as I stick to the script and do everything that I plan on doing, I’ll be fine.”

Wilson is one of four wide receivers at the draft, joining Buckeyes teammate Chris Olave, Drake London and Jameson Williams. Treylon Burks, Jahan Dotson, George Pickens and Christian Watson can make it eight receivers in the first round, or 25% of the players.

Wilson had 70 catches for 1,058 yards and 12 touchdowns last season as a junior. He visited the Jets, Washington, Carolina, Baltimore and Detroit.

“If I was to go to any team, I will do what I do and I’ll be able to help the team,” he said. “I think I’m super versatile. I can take the top off and also, a great teammate, someone that’s good to be around. That’s really important as well. So I feel like I would do a great job of coming in and doing my job and exceeding expectations for sure.”

Wilson is well aware that receivers Justin Jefferson and Ja’Marr Chase had excellent rookie seasons the past two years.

“It gives you some confidence to see those guys, around the same age, making plays on the biggest level, on the highest level,” he said. “I’m going to go back and watch Justin Jefferson’s rookie tape and Ja’Marr Chase’s rookie tape just to get the motivation to see what it looks like.”

In a draft lacking a standout quarterback going first overall, Thibodeaux and Wilson are two of the future stars in a first round that will be dominated by players at their position.