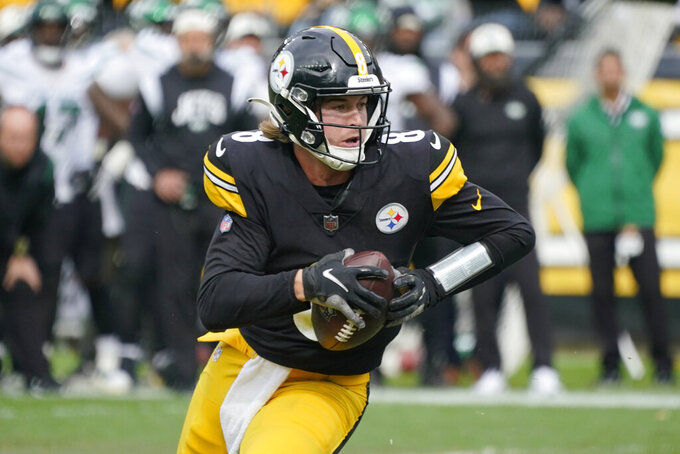 PITTSBURGH (AP) — There was something about Kenny Pickett.

There was something about the way the then-undersized kid from the Jersey Shore carried himself.

A swagger that didn't bleed into overconfidence. A relentlessness difficult to measure but impossible to miss.

Tim Salem could see what other college recruiters more consumed by Pickett's relative lack of size during the early portion of his high school career could not.

The University of Pittsburgh tight ends coach kept tabs on the quarterback who seemed to think he was a linebacker, waiting for Pickett's physical attributes to catch up to the things you can't teach.

“He had, you know, the ‘It’ factor,” Salem said. “I mean, he had quarterback mentality, quarterback demeanor, anticipation, moxie. All those words you want to hear. You know, he had it.”

Eventually, Pickett grew. The scrawny 5-foot-8 project evolved into a sturdy 6-foot-3 playmaker, replete with professional-wrestler hair and a chip on his shoulder that's never gone away.

That weight of that chip propelled Pickett from the bottom of the Pitt depth chart in January 2017 to the first round of the NFL draft last spring to the spotlight that comes with being the starting quarterback of a marquee franchise.

Pickett's jog onto the field on Sunday when the Steelers (1-3) face Buffalo (3-1) marks the next chapter in his remarkable journey, one that few saw coming when Pickett arrived at Pitt a little less than six years ago.

Salem, however, believed. So did Panthers defensive line coach Charlie Partridge, who kept noticing how the kid running the scout team offense in the spring and summer of 2017 seemed to relish getting hit by the first string.

That hasn't changed, though the stage has shifted considerably from the practice field tucked toward the back of the facility the Panthers share with the Steelers.

Yes, that was Pickett jawing with New York Jets defensive tackle Quinnen Williams during his NFL debut last Sunday after throwing an 18-yard strike to Pat Freiermuth despite the 300-pound Williams launching himself directly — and cleanly — into Pickett's chest.

“I grew up playing defense,” Pickett said Wednesday after his first full practice as the starter. “I was taught to play that way. I was raised that way and carry it into how I play quarterback. I kept that aspect from both sides of the ball from my dad when I was playing on offense.”

It's the kind of nervy play Steelers coach Mike Tomlin was looking for when he turned to Pickett at halftime last Sunday with Pittsburgh trailing by four points. Tomlin and Mitch Trubisky, tried to hold that moment at bay as long as they could.

Yet they have discovered — as has just about everyone else during Pickett's rise — that eventually, he is going to win. This is the same player, after all, who began his freshman year at Pitt as a third-stringer and finished it by orchestrating a stunning upset of undefeated and No. 2-ranked Miami.

The lasting image of that game is Pickett outstretched as he dives toward the pylon for a touchdown, one that a graffiti artist replicated on a wall near the school's downtown campus and spawned the nickname “Kenny Perfect.”

Living up to that moniker proved difficult at times over the next three years as Pickett and the Panthers found fitful success. He nearly declared for the draft in 2021 only to return to Pitt instead after being told his prospects were middling at best.

All he did last fall was put together the best season by a quarterback in school history while leading the Panthers to the ACC title and finishing third in the Heisman Trophy race. The fairy-tale ending came when Tomlin called Pickett just before Pittsburgh made him the 20th overall pick in the 2022 draft.

He beat out Mason Rudolph to begin the regular season as Trubisky's backup then politely declined all interview requests as Trubisky struggled and the volume of the “Kenny! Kenny!” chants grew.

Pickett then made it a point to seek out Trubisky after the switch, saying they were in a good place. Maybe that's because five years ago Trubisky is where Pickett is now: a rookie tasked with being the face of a franchise. Trubisky never grew fully comfortable with the responsibility. It's one Pickett has been preparing for long before anyone else thought it was possible.

No wonder he hardly seems fazed by taking on a Super Bowl favorite in his first start. He's been underestimated his entire life. Why stop now?

“Everybody else thinks we’re underdogs,” he said. “We don’t.”