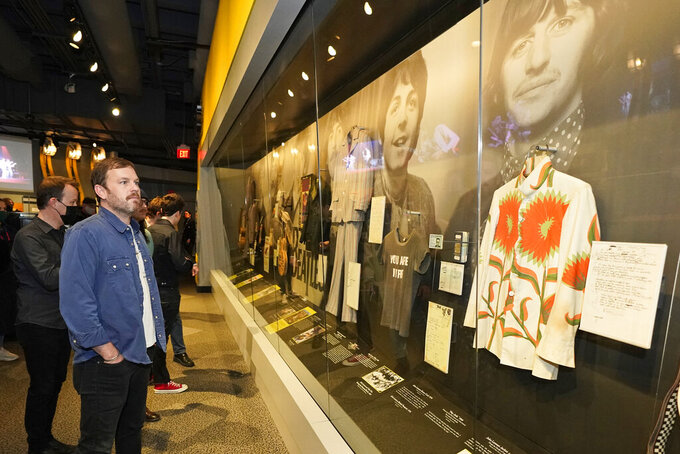 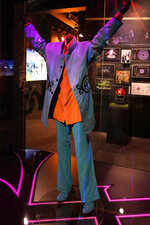 Kings of Leon’s rock and roll journey has taken them from an NFT to the NFL.

One of rock’s biggest acts, the band visited the Rock & Roll Hall of Fame on Thursday to see a new exhibit featuring their venture into cryptocurrency before they opened the NFL draft with their first live show in more than a year.

“I hope we don’t look too excited to be up there,” said lead singer Caleb Followill.

“I hope we don’t play a song a linebacker doesn’t like and he decides to come out and take us out,” joked drummer Nathan Followill.

In March, Kings of Leon — brothers Caleb, Nathan and Jared Followill and their cousin, Matthew — made history by releasing its eighth studio album, “When You See Yourself” as a non-fungible token or NFT, a digital form of currency that can only be used in its own ecosystem.

Well, even the band wasn’t sure what it was getting into with its pioneering move.

“We had to study up a little bit, and it’s still a little beyond me,” Caleb said before the band toured the hall. “We didn’t know that much about it, but we were happy to be introduced to it.”

Nathan Followill had some familiarity with cryptocurrency, but wasn’t quite up to date on NFTs or all their possibilities.

“I think it’s the way of the future, not only for music but you’re seeing sport cards in the form of NFTs, artists putting their work through NFT,” he said. “So not just for music, but for art and I think it will definitely have a place.”

The band is giving a “significant” portion of proceeds from the NFTs to Live Nation’s Crew Nation fund, a charity that supports workers in the music industry hurt by the COVID-19 pandemic.

Greg Harris, the Rock Hall’s president and CEO, applauded the band’s willingness to try something new.

The band’s visit also coincided with a new football-themed exhibit at the hall, “The Biggest Show on Turf: 55 Years of Halftime Shows,” showcasing the evolution of Super Bowl halftimes.

Among the items on display is the outfit Prince wore in 2007, when his rain-soaked performance ended with a soul-stirring “Purple Rain” to the jacket worn by U2′s Bono in 2002 in a show paying tribute to the victims of the 9/11 attacks.

Now that they’ve played the draft, would Kings of Leon ever consider playing a Super Bowl.

“I don’t think they would ever ask us,” Matthew said. “We’re not that kind of entertainer. We would do it, but we would start rehearsing now for 10 years from now.”

And since he was in Cleveland, Nathan Followill made sure to give some love to Browns quarterback Baker Mayfield.

The Followills grew up in Oklahoma and have followed Mayfield, who won the Heisman Trophy in 2017 with the Sooners.

“I’ve got my Browns’ Baker jersey at home,” he said. “I follow all the Oklahoma guys on whatever team they go to, but I’m a big Baker fan.”

If their names sound familiar, well, they should.

Surtain is the son of a standout cornerback with the same name who spent 11 seasons in the NFL, seven with the Dolphins and four with the Chiefs. A 2002 All-Pro who also made three Pro Bowls, Surtain was a star on special teams, too. The elder Surtain was selected in the second round (44th overall) in 1998.

Samuel’s dad, also with the same name, played 11 pro seasons, too. A fourth-round pick out of UCF, he won two Super Bowls with New England, where he spent his first five NFL seasons before going to Philadelphia for four years and Atlanta for two. Samuel twice led the league in interceptions (2006 with the Patriots, 2009 with the Eagles) and finished his career with 51 picks and six touchdowns.

Horn doesn’t go by the same first name as his father, Joe. But his father played 12 NFL seasons and was a four-time Pro Bowl selection as a wide receiver with Kansas, New Orleans and Atlanta.

Other draft eligibles this week whose fathers played in the NFL include Ohio State linebacker Tuf Borland, whose dad, Kyle, played that position for one season with the Rams; Georgia Tech LB David Curry (dad Buddy spent eight seasons in the league and was the 1980 AP Defensive Rookie of the Year for the Falcons); and Stanford center Drew Dalman (father Chris had a seven-year NFL career as an offensive lineman and won a Super Bowl with the 49ers).

The Heisman Trophy rarely is a prognosticator of pro football success — consider such winners for the defensive players need not apply award as Johnny Manziel, Tim Tebow, Troy Smith and Eric Crouch.

When someone other than a quarterback wins it, particularly a wide receiver, the trend leans the other way, toward stardom.

Alabama's DeVonta Smith took the 2020 Heisman. The previous three wideouts to enter the NFL with that hardware and as first-round picks were Desmond Howard (1991), Tim Brown (1987) and Johnny Rodgers (1972). Brown is in the Pro Football Hall of Fame and Howard was the 1997 Super Bowl MVP.

Smith and college teammate Jaylen Waddle are projected to be chosen Thursday night, making them the sixth pair of wide receivers from the same school drafted in the first round of the same draft since 1967. Alabama would become the first college program to have it occur in successive drafts. Henry Ruggs went 12th overall to Las Vegas, and Jerry Jeudy 15th overall to Denver last year.

It's quite possible that college teammates will be chosen consecutively in the opening round this year; it happens more often than people think. So if Alabama receivers DeVonta Smith and Jaylen Waddle go one after the other, don't be surprised. Or maybe it will be Miami, Fla., edge rushers Jaelan Phillips and Gregory Rousseau. Or Virginia Tech tackle Christian Darrisaw and cornerback Caleb Farley.

In 2010, Oklahoma DT Gerald McCoy was the third pick, and OT Trent Williams went next. Three years after that, Alabama DB Dee Milliner and guard Chance Warmack were taken ninth and 10th overall.

Browns general manger Andrew Berry was on the clock way before anyone else in this year’s NFL draft.

Berry and his wife, Brittan, welcomed their third child on Thursday morning, hours before the draft began in Cleveland.

Eden Ruth Berry is the new rookie in the Berry family.

The Browns have the No. 26 overall pick, Berry’s second draft since returning to Cleveland after spending a season in Philadelphia. The team is expected to add more defensive players after Berry focused on that side of the ball in free agency.