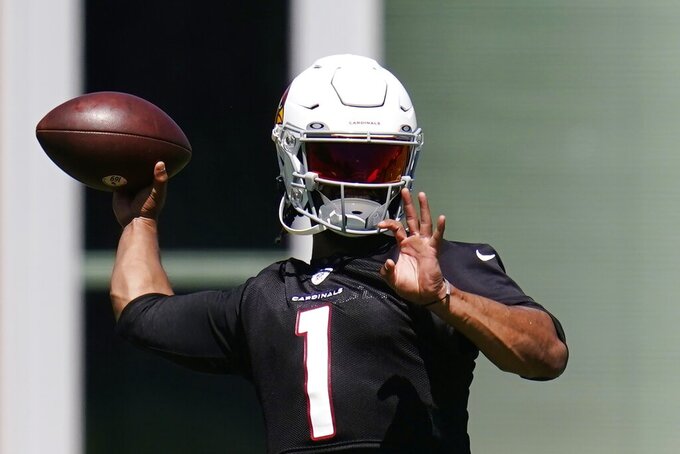 LAST YEAR: The Cardinals looked like one of the NFL's best teams for the first three months of last season after winning their first seven games and improving to 10-2 after a victory over the Bears on Dec. 5. Then came the collapse, with Arizona losing four of its final five regular-season games before getting embarrassed by the Rams 34-11 in the NFC wild-card round. The Cardinals struggled to keep their early momentum after injuries to key players such as WR DeAndre Hopkins and defensive lineman J.J. Watt.

CAMP NEEDS: The Cardinals need to keep Murray happy and the easiest way to do that is signing the quarterback to a long-term deal that could be worth considerably more than $200 million. Until (or if) that happens, it will probably dominate the news surrounding camp. Arizona's offense also needs to figure out how to produce during Hopkins' suspension. The hope is young receivers such as Rondale Moore and Antoine Wesley — along with Marquise Brown — can fill the void.

KEY CAMP COMPETITIONS: It's a new era for the Cardinals defense, who released Hicks and watched Jones sign with the Las Vegas Raiders. The pressure is on two young linebackers — Isaiah Simmons and Zaven Collins — to become cornerstones after the team spent back-to-back first-round picks on them in 2020 and 2021. Both have had good moments but have struggled to produce on a regular basis. The Cardinals also need a backup RB to emerge behind James Conner. The leading candidates are Williams and third-year player Eno Benjamin.

EXPECTATIONS: The Cardinals expect to go back to the playoffs and stick around for more than one week. It remains to be seen whether that's realistic since there weren't a lot of obvious upgrades to the roster during the offseason. If the Cardinals can tread water during the first six weeks of the season, they could benefit from a fresh Hopkins returning in Week 7.