Lack of balance on offense is Commanders' latest weakness 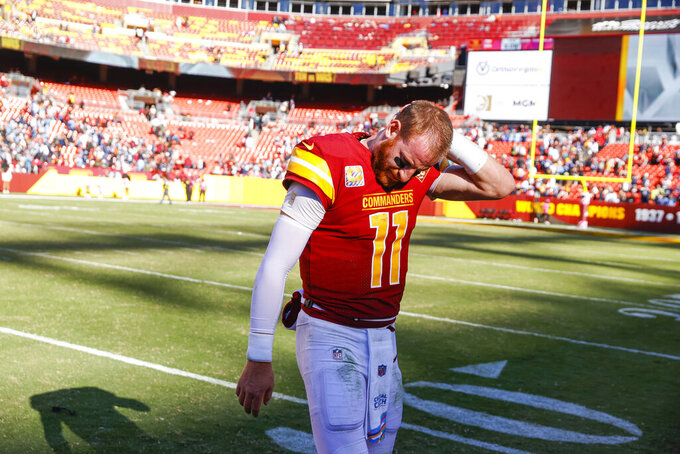 Washington Commanders quarterback Carson Wentz (11) walks off the field after their team's loss to the Tennessee Titans at an NFL football game on Sunday, Oct. 9, 2022, in Landover, Md. (Shaban Athuman/Richmond Times-Dispatch via AP)

ASHBURN, Va. (AP) — The defense giving up big plays was to blame for the start of the Washington Commanders ' losing streak. The offense has taken the lion’s share now that the skid has reached four.

A lack of offensive balance is the most prominent reason the Commanders lost to Tennessee to fall to 1-4 this season. They had just 12 handoffs to a running back compared to Carson Wentz dropping back to pass more than 40 times.

For the season, Washington has just 98 rushing plays by a running back or receiver compared to 220 passing attempts by Wentz, who has also been sacked 20 times. That’s not exactly a winning recipe for a team playing behind a banged-up offensive line missing multiple Week 1 starters.

There’s not much time to work out the kinks with a short week of practice before visiting the Chicago Bears on Thursday night. And while the defense has found a rhythm, Washington is last in the league with one takeaway and second-last with a minus-7 turnover differential.

Add in Wentz throwing an interception at the 1-yard line with 6 seconds left to seal the 21-17 defeat to the Titans, and not a whole lot is going right.

“We have to be better from top to bottom,” Rivera said.

One aspect that could help is the addition of rookie running back Brian Robinson Jr., who made his NFL debut Sunday six weeks after being shot twice in the right leg in an attempted robbery in Washington. Robinson figures to have his workload increased as his conditioning improves.

How about a little of everything else? The offensive line has been beset by injuries, but veteran guard Andrew Norwell and others also have not played up to expectations.

“These are guys that have all played in the league,” Rivera said. “They’re all guys that are capable.”

Second-year wide receiver Dyami Brown TD passes of 75 and 30 yards against the Titans. Those were his first TD catches as a pro.

“One of the consistent spots has been the play of the wide receivers,” Rivera said. “I thought Dyami really flashed and showed what he’s capable of.”

Cornerback William Jackson missed a tackle and continued to play poorly enough to get benched entirely. Jackson said after the game his back was bothering him, and Rivera acknowledged Jackson had an injury but stopped short of saying that was the reason for the move.

“We pulled him, and we’ll leave it at that,” Rivera said.

Jackson was replaced by waiver-wire pickup Rachad Wildgoose, with Benjamin St-Juste getting tougher matchups. Jackson is one of Washington’s highest-paid players, now nearly midway through a $40.5 million, three-year contract.

Make as many adjustments as possible before facing the Bears in what could be another ugly prime-time game on a Thursday. Chicago (2-3) is a 1-point favorite on FanDuel Sportsbook.