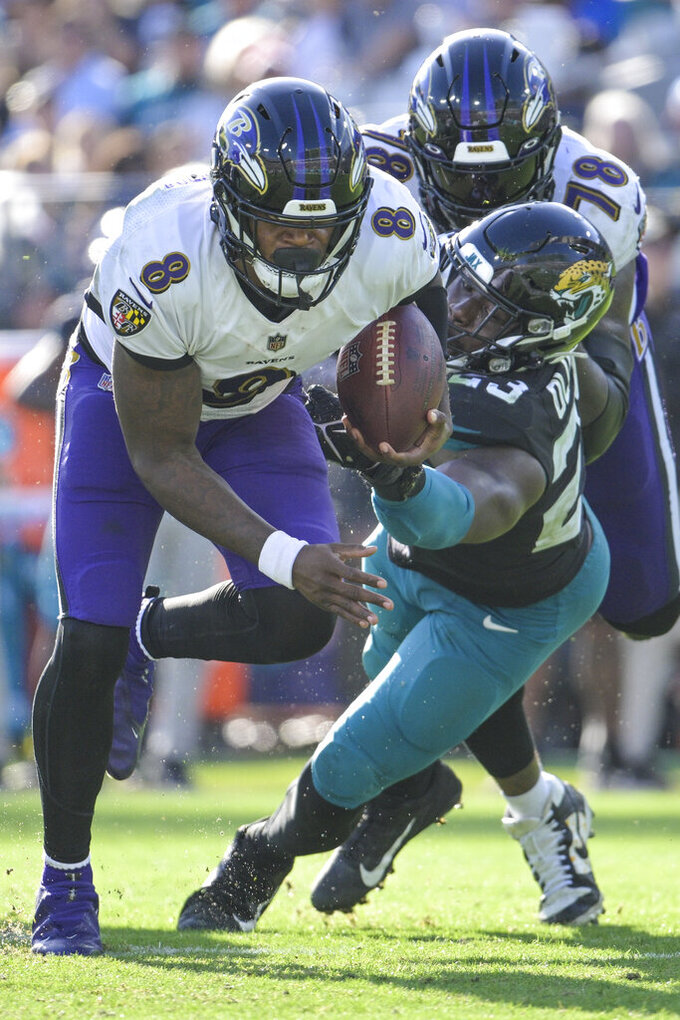 Jackson blasted a fan on Twitter for suggesting the Ravens let the star quarterback leave in free agency at the end of this season because “games like this should not come down to" Tucker. The fan added “Let Lamar walk and spend that money on a well-rounded team.”

“I don’t like losing,” Jackson said after the game. “Nobody likes losing, but it is what it is.”

Jackson completed 16 of 32 passes for 254 yards and a touchdown. He also ran 14 times for 89 yards and lost a fumble. His receiving corps dropped at least four passes, including ones by Mark Andrews and Demarcus Robinson in the end zone.

The Ravens (7-4) settled for three short field goals in five trips inside the 20-yard line and were 1 for 3 in goal-to-go situations.

Jackson put the Ravens in position to win late, though.

He completed a 12-yard pass to Josh Oliver with 2:02 remaining and then added a 2-point conversion to Andrews. And even after the Jaguars (4-7) answered and took a one-point lead with their own 2-point conversion, Jackson put Baltimore in position for Tucker's winning kick.

“I think the kick has a better chance than a Hail Mary,” coach John Harbaugh said.

Tucker's 67-yarder, which would have been a yard longer than his NFL record, came up several yards shy of the crossbar. Jacksonville players flooded the field — and at least one jumped into the stands — to celebrate.

The loss ended a four-game winning streak for Baltimore. Harbaugh and the Ravens bemoaned the red-zone struggles.

“We got stopped,” Harbaugh said. "You try to call your best plays. Sometimes you think you can run it in — you run it in, it doesn’t work — sometimes you try to pass it in. We just didn’t do a good job in the red zone is the bottom line.

"You go down there and kick, what, four field goals? That’s tough. Those are big trips down there, and obviously touchdowns are what you’re looking for. It’s something we have to improve on going forward. That’s really important for us.”

Gus Edwards ran for 52 yards and a touchdown, but he also fumbled late, leading to a field goal.

Oliver finished with four receptions for 76 yards and a score in his return to Jacksonville, the team that drafted him in the third round in 2019. The Jaguars traded Oliver to Baltimore after two injury-filled seasons.

Still, the game came down to a few plays and ended with another close loss for the Ravens, who thought they had turned a corner after a slow start to the season.