The Latest: Dalvin Cook out for game with shoulder injury 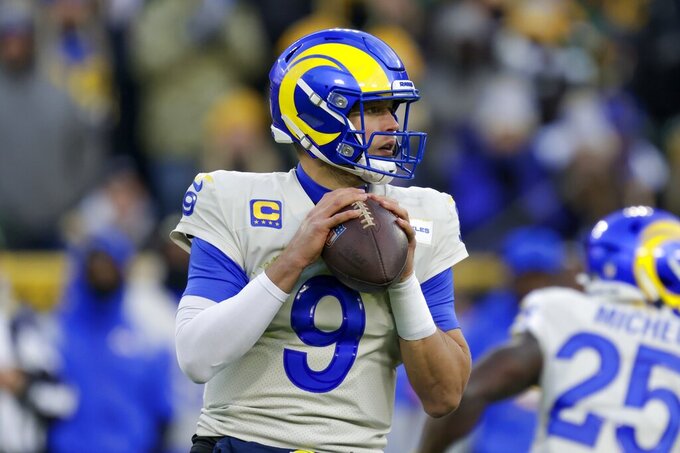 The Latest from Week 12 of the NFL (all times EST):

Minnesota Vikings running Dalvin Cook has been taken off the field on a cart after injuring his shoulder in the third quarter against the San Francisco 49ers.

He is out for the remainder of the game.

Cook went down after losing a fumble and stayed on the ground for a while before being taken to the locker room with an undisclosed injury.

Cook had 10 carries for 39 yards and six catches for 64 yards before getting hurt.

Odell Beckham Jr. has his first touchdown of the season, and his first as a Los Angeles Ram.

Beckham caught a 54-yard touchdown pass from Matthew Stafford on the opening play of the fourth quarter. The Rams added a two-point conversion on a Stafford pass to Cooper Kupp, cutting the Green Bay Packers’ lead to 36-25.

The Packers had pursued Beckham after the Cleveland Browns released him earlier this season, but he chose the Rams instead.

Beckham entered the day with just 19 catches for 250 yards this season. He had two catches for 18 yards two weeks ago in his Rams debut, a 31-10 loss to the San Francisco 49ers.

Matthew Stafford has thrown a Pick-6 for a third straight game, and now the Los Angeles Rams could be heading toward their third straight loss. Stafford attempted to throw a pass to Cooper Kupp late in the third quarter, but Rasul Douglas stepped in front of it and scored his first career touchdown on a 32-yard interception return.

The Green Bay Packers extended their lead over the Los Angeles Rams early in the third quarter despite losing Randall Cobb to a groin injury.

Cobb caught four passes for 95 yards and a touchdown in the first half but isn’t playing the second half. The Packers still reached the end zone on the opening drive of the second half, with Aaron Rodgers throwing a 5-yard touchdown pass to A.J. Dillon.

That drive included a 12-yard completion from Rodgers to Josiah Deguara on fourth-and-2 from the Rams’ 21-yard line.

Teddy Bridgewater has returned to the game for the Denver Broncos on the first series of the second half.

Denver’s starting quarterback had left in the first half with a lower leg injury and Drew Lock filled in while he was out, leading the Broncos to a touchdown and a 14-0 lead.

Los Angeles Chargers quarterback Justin Herbert has struggled against the Denver defense all day, but managed to throw one TD pass before halftime to cut the lead in half. ___

Green Bay’s offense ended its recent penchant for slow starts as the Packers grabbed a 20-17 halftime lead over the Los Angeles Rams.

The Packers scored on four straight possessions to build their lead, though big plays by their defense helped them start the first two of those drives inside the Rams’ 30-yard line. Heading into Sunday, the Packers had scored a total of 13 first-half points over their last three games.

Aaron Rodgers has gone 15 of 24 for 199 yards with a touchdown pass and touchdown run. Randall Cobb has four catches for 95 yards and a touchdown. Davante Adams has caught five passes for 80 yards.

Aaron Rodgers’ injured toe couldn’t prevent the reigning MVP from running for a touchdown on third-and-goal.

Rodgers made it around the right end from 1 yard out for his third touchdown run of the season, tying Aaron Jones for the team lead. The Green Bay Packers lead the Los Angeles Rams 7-0 late in the first quarter.

Rodgers didn’t practice all week due to a toe injury. Rodgers said this week it’s a fracture that involves his pinky toe.

The Packers’ touchdown drive started at Los Angeles’ 6-yard line, thanks to a big play from their defense. Rashan Gary sacked Matthew Stafford and hit the quarterback’s elbow, producing a fumble that Preston Smith recovered.

The Denver Broncos lost starting quarterback Teddy Bridgewater to an lower right leg injury when he was blindsided by safety Derwin James Jr. in the first quarter in Denver.

Bridgewater was replaced by Drew Lock, who fumbled on his second snap but led the Broncos to their second touchdown of the game. Left tackle Calvin Anderson was injured on the play and carted off with left knee injury.

The Broncos lead the Chargers 14-0 early in the second quarter.

4:30 p.m. The Baltimore Ravens began the season with a host of injuries at running back.

Now, with a win Sunday night against the Cleveland Browns, the Ravens will have the best record in the AFC and have the inside track to claim the No. 1 seed and a first-round bye.

The Tennessee Titans had the best record coming into the weekend but lost to the New England Patriots. The Patriots and Titans are both 8-4.

Cam Newton has been benched.

The Panthers quarterback was yanked from the game in the fourth quarter with Carolina trailing 30-10 to the Miami Dolphins and replaced by P.J. Walker. On his first possession, Walker threw an interception.

Newton has struggled all afternoon, completing just 5 of 21 passes for 92 yards and has been intercepted twice. Newton has not handled Miami's pressure well, and he has a career-low 5.8 QB rating.

Barring a miraculous comeback, Newton will have lost his last 10 starts with the Panthers dating back to the 2018 season.

The Tennessee Titans have outgained the New England Patriots 237-67 on the ground early in the fourth quarter — and are losing by 13 points.

The Patriots lead 26-13 behind three Titans turnovers, including a Ryan Tannehill interception in the red zone.

Dontrell Hillard has run for 131 yards and a touchdown and D’Onta Foreman has 81 yards rushing for the Titans in the absence of Derrick Henry.

Green Bay Packers running back Aaron Jones will be playing Sunday against the Los Angeles Rams after missing only one game due to a sprained medial collateral ligament.

Jones practiced on a limited basis this week and had been listed as questionable on the Packers’ injury report. The Packers have declared him active for Sunday’s game.

Packers outside linebacker Rashan Gary (elbow) and wide receiver Allen Lazard (shoulder) also are returning from one-game absences. The Packers won’t have cornerback Kevin King, who is dealing with injuries to his hip and knee.

Carson Wentz has thrown three touchdown passes in the first half to give Indianapolis a 24-14 lead over Tom Brady and the injury-depleted Tampa Bay Buccaneers defense.

Linebacker Devin White started the game despite being listed as questionable with an injured quadriceps. But he left the game in the first half with a hip injury. He has not returned. Defensive tackle Vita Vea also left briefly after losing a tooth and starting cornerback Jameel Dean has been ruled out with a right shoulder injury.

The Colts lost 2020 All-Pro defensive tackle DeForest Buckner late in the first half with a right knee injury. He is listed as questionable.

All of it occurred on a day Robert Mathis, the Colts career sacks leader with 123, was inducted into the team’s Ring of Honor.

Cincinnati running back Joe Mixon has had a huge first half.

Mixon rushed 20 times for 117 yards and had a 1-yard touchdown plunge as the Bengals rolled to a 31-3 halftime lead over the Pittsburgh Steelers.

Mixon’s hot start followed a 123-yard, two-TD performance in the Bengals’ 32-13 win over Las Vegas last Sunday. The five-year veteran has at least once touchdown in his last eight games, and at least one rushing touchdown in the last five.

Dolphins cornerback Xavien Howard recorded his 25th career interception in his 67th NFL game in the first half against Carolina Panthers.

The former second-round pick from Baylor is the fastest player to record 25 interceptions since 1990, surpassing Marcus Peters (68 games).

The Dolphins have intercepted Cam Newton twice and blocked a punt for a touchdown and lead Carolina 21-10 at halftime. Miami is seeking its fourth straight win.

Linebacker Tae Crowder made a goal-line interception on the final play of the first half to preserve the New York Giants' 3-0 lead over the Philadelphia Eagles in a defensive struggle between the NFC East rivals.

Faced with a third-and-goal at the 1 with :08 showing on the clock, Jalen Hurts was under pressure rolling to his right and threw the ball almost right at Crowder who intercepted and fumbled out of bounds on his return as the clock ran out. It’s the first time the Eagles have been shutout in the first half this season.

Graham Gano kicked a 35-yard field goal for the Giants in the first quarter and missed another from 51 yards, ending a streak of 12 in a row.

It was doink, and doink again for Tennessee kicker Randy Bullock.

Bullock clanged it off the right upright on an extra point after the Titans scored in the second quarter that would have tied the game with the Patriots 7-7. Then he did the same thing on a 44-yard field goal attempt on Tennessee’s next possession for another miss.

The Patriots lead 13-6 late in the second quarter.

2:10 p.m. Titans coach Mike Vrabel is still perfect with the red challenge flag this season. This one he didn’t even think he needed to throw.

Tennessee was on the Patriots 1-yard line when Ryan Tannehill connected with Nick Westbrook-Ikhine. The receiver slipped and fell before reaching the goal line, but he reached for the end zone while he was on the ground. He was ruled down at the 1, but Vrabel argued with the officials that he hadn’t been touched before the ball crossed the plane of the goal line.

When he couldn’t persuade them to correct the call on their own, he reluctantly threw the flag. Vrabel is 4-for-4 on challenges.

The Cincinnati Bengals are off to a hot start against the Pittsburgh Steelers, leading 17-3 early in the second quarter.

The Bengals (6-4) took the opening kickoff and went 75 yards, with Joe Mixon rushing for 49 yards on seven carries, and quarterback Joe Burrow finishing it with an 8-yard scramble for the touchdown.

On the second play of the Steelers’ first possession, Ben Roethlisberger was picked off by Cincinnati’s Eli Apple, who returned it 50 yards to the Pittsburgh 5. But the Bengals had to settle for an Evan McPherson field goal after Burrow was sacked for a 12-yard loss.

After Chris Bosworth got Pittsburgh (5-4-1) on the board with a 41-yard field goal, Burrow threw a 32-yard scoring pass to Tee Higgins.

The Bengals, who beat the Steelers by double digits in September, are going for their first season sweep since 2009.

The New York Giants lead the Philadelphia Eagles 3-0 at the end of the first quarter behind a 35-yard field goal by Graham Gano that was set up by a 20-yard flea flicker screen pass to tight end Evan Engram.

Cam Newton and the Carolina Panthers head to Miami fighting for their playoff lives — and looking to snap a dubious streak.

Newton was terrific in the previous Dolphins-Panthers meeting in 2017, completing 21 of 35 passes for 254 yards and four touchdowns. Newton also carried five times for 95 yards in the 45-21 win.

The Dolphins started the season 1-7, but have rallied to win three straight games.