The Latest: Kickers had 7 missed XPs in afternoon games 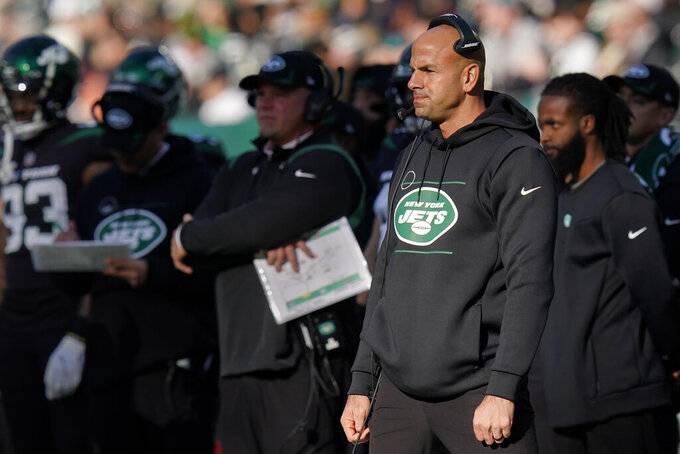 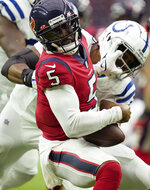 The Latest from Week 13 of the NFL (all times EST):

It’s been another rough day for NFL kickers.

With only the Sunday night matchup between the Broncos and Chiefs remaining, kickers have already combined to miss seven extra points on the day.

Jets kicker Alex Kessman missed his first two extra point attempts during his NFL debut after he signed from the practice squad Saturday to replace the struggling Matt Ammendola.

As bad as it's been, it’s not close to the 13 extra points kickers collectively missed during Week 5. That week also had 14 missed field goals, making it the highest number of combined misses since Week 11 of the 1987 season.

Seattle’s Adrian Peterson has moved into a tie with Jim Brown for 10th all-time in total career touchdowns.

Peterson’s 1-yard touchdown run in the second quarter against San Francisco gave him 126 for his career, tying him with the Hall of Famer..

Peterson now has 120 rushing touchdowns and six receiving in his 15 seasons. Brown had 106 touchdown runs and 20 touchdown receptions during his nine-year career.

The Los Angeles Rams have a 16-7 lead on the Jaguars at halftime, but Jacksonville is keeping it close with a series of big third-down stops.

Trevor Lawrence’s offense has struggled mightily except for one 73-yard TD drive capped by Carlos Hyde’s 1-yard run. Jacksonville managed only 85 total offensive yards in the half.

Matthew Stafford left the game for one play after taking a hard hit from Jacksonville’s Roy Robertson-Harris, who was whistled for roughing the passer. Stafford returned after John Wolford handed off on his only play. ___

The Los Angeles Rams are off to a solid start in their effort to end a three-game skid despite losing starting center Brian Allen to a knee injury on their first play from scrimmage.

Los Angeles took a 10-0 lead on Jacksonville after the first quarter with help from a fumble forced by Aaron Donald, who threw James Robinson to the turf violently enough to dislodge the ball. Sony Michel subsequently scored for the Rams.

Jacksonville trimmed the lead to 10-7 early in the second quarter on Carlos Hyde’s 1-yard TD run, finished a drive abetted by Rams penalties.

San Francisco reserve running back Trenton Cannon was taken off the field on a backboard after a scary collision on the opening kickoff against Seattle. Cannon was attempting to make a tackle on DeeJay Dallas when his head hit the leg of a teammate.

San Francisco’s athletic training staff immediately rushed to the field and stabilized Cannon’s neck. He was eventually placed on a backboard, loaded onto a stretcher and into an ambulance that had been brought onto the field.

He was seen moving his arm as he was being loaded into the ambulance. The team said he was out for the game with a concussion.

Cannon is in his fourth season out of Virginia State. He started the season with Baltimore before joining the 49ers and has primarily played on special teams. ___

Houston Texans quarterback Tyrod Taylor has been benched in the third quarter against the Indianapolis Colts.

Taylor was evaluated for an undisclosed injured after a Houston’s first possession of the third quarter but the team said he was available to play and it was coach David Culley’s decision to insert backup Davis Mills in his place.

Houston trailed 21-0 when Taylor was benched. Taylor threw an interception on the first play of the game and the Texans fumbled on their second possession before punting on their next four drives.

Mills, a rookie from Stanford, took over with about four minutes left in the third quarter.

Thielen entered the game tied for the league lead with 10 receiving touchdowns.

He had one catch for no yards prior to leaving the game Sunday.

Minnesota receiver Justin Jefferson has joined Odell Beckham Jr. and Randy Moss as the only players with 2,500 or more receiving yards in their first two seasons during in the Super Bowl era.

Jefferson provided some of the few highlights for the Vikings in the first half of their matchup with the Lions, catching five passes for 85 yards.

Murray came into the matchup against Chicago with 9,969 yards. The third-year pro threw for 73 yards and two touchdowns in the first half. He also ran for a score, helping the Cardinals grab a 21-7 lead.

Murray also joined Cam Newton as the only players in NFL history with at least 10,000 yards passing and 1,500 rushing. ___

Los Angeles Chargers defensive end Joey Bosa is being evaluated for a concussion after going out in the first quarter against the Cincinnati Bengals.

Bosa went to the locker room after coming off the field under his own power.

The Chargers were leading the Bengals 24-0 at the time.

Alex Kessman was signed from the practice squad Saturday to replace the struggling Matt Ammendola, but missed both of his first two extra point opportunities in his NFL debut.

After Elijah Moore’s 3-yard touchdown catch gave the Jets the lead over the Philadelphia Eagles, Kessman was wide left on the point after.

Philadelphia took a 7-6 lead on its opening possession, with Gardner Minshew throwing a 36-yard TD pass to Dallas Goedert. Zach Wilson and the Jets answered right back with the rookie quarterback capping an 11-play drive with a 1-yard touchdown run. But Kessman was wide left again on the extra point, prompting boos from the Jets fans at MetLife Stadium.

Kessman, who previously spent time with the Los Angeles Chargers after being signed as an undrafted free agent in May, was signed to the Jets’ practice squad last week. He won an open competition with Ammendola, who was 13 of 19 on field goal attempts, but New York could again be in the market next week for a kicker.

Kessman's misses were two of five early missed extra points around the NFL. Ryan Succop missed one for Tampa Bay and Dustin Hopkins (Chargers) and Evan McPherson (Cincinnati) both had misses in their matchup. - Dennis Waszak Jr. reporting from East Rutherford, New Jersey.

Tom Brady has come out throwing against the Atlanta Falcons.

The Tampa Bay Buccaneers passed on their first 13 plays -- the first time they’ve done that since 2004.

Brady is now 14 of 17 for 139 yards, guiding the Bucs to touchdowns on their first two possessions. He’s thrown a pair of 3-yard scoring passes, connecting with Leonard Fournette and Cameron Brate to give Tampa Bay a 13-7 lead with just over 4 minutes left in the opening quarter. ___

Minnesota wide receiver Adam Thielen hurt his left ankle on the game’s opening drive and had his helmet off on the sideline the next time the Vikings had the ball in the first quarter at Detroit.

Thielen entered the game tied for the league lead with 10 receiving touchdowns.

Lions defensive tackle Nick Williams was also injured on the first possession, walking off the field holding his left hand and wrist. ___ 12:00 p.m.

Arizona Cardinals quarterback Kyler Murray and three-time All-Pro receiver DeAndre Hopkins are active against the Chicago Bears after missing the previous three games because of injuries.

Murray (ankle) and Hopkins (hamstring) returned to practice this week. Both players were listed as questionable for the NFC West leaders.

The Cardinals, owners of a league-best 9-2 record coming in, won two of three without them prior to a bye last week.

The Detroit Lions and Minnesota Vikings paid tribute to the victims of Tuesday’s school shooting in Oxford, Michigan, by wearing a gold “O” on the back of their helmets.

Both franchises have ties to Oxford High School football coach Zach Line. The former NFL fullback played for the Vikings from 2013 to 2016 and in New Orleans from 2017 to 2019, when Detroit coach Dan Campbell was an assistant coach for the Saints.

The tragedy took the lives of four high school students, including Tate Myre, a standout football player and wrestler. ___

Gardner Minshew is starting at quarterback for the Philadelphia Eagles against the New York Jets in place of the injured Jalen Hurts.

Hurts was limited in practice all week with a sprained ankle, but insisted he would be ready to play Sunday. Coach Nick Sirianni opted to instead play it safe and start Minshew, who has thrown two passes this season for the Eagles.

Hurts was inactive for the game, so Reid Stinnett will serve as Minshew’s backup.

Hurts was injured in Philadelphia’s 13-7 loss against the Giants last Sunday, when the second-year quarterback had his worst game as a pro with three interceptions. His ankle was stepped on in the second half, but he remained in the game.

Hurts’ mobility is a major part of his game, so playing on a sprained ankle is an issue. He’s the Eagles’ leading rusher with 695 yards on 122 carries and has rushed for at least 50 yards in the Eagles’ past six games — the franchise’s first QB to do that since Randall Cunningham in 1990.

Minshew was acquired in a trade with Jacksonville just before the start of the season. He was third on the Eagles’ depth chart until Joe Flacco was dealt to the Jets on Oct. 25. Minshew’s only appearance this season came in Week 8, when he completed both of his passes for 11 yards in Philadelphia’s 44-6 blowout win at Detroit.

Minshew threw for 5,530 yards and 37 touchdowns with 11 interceptions in 23 games, including 20 starts, in two seasons in Jacksonville. He became expendable after the Jaguars drafted Trevor Lawrence with the No. 1 overall pick in April.

Running back Jordan Howard was also among the Eagles’ inactives, but Boston Scott was active after sitting out practice all week with a non-COVID-19 illness.

Jets wide receiver Corey Davis was also active after missing last week with a groin injury and being listed as questionable for this game. - Dennis Waszak Jr. reporting from East Rutherford, New Jersey..