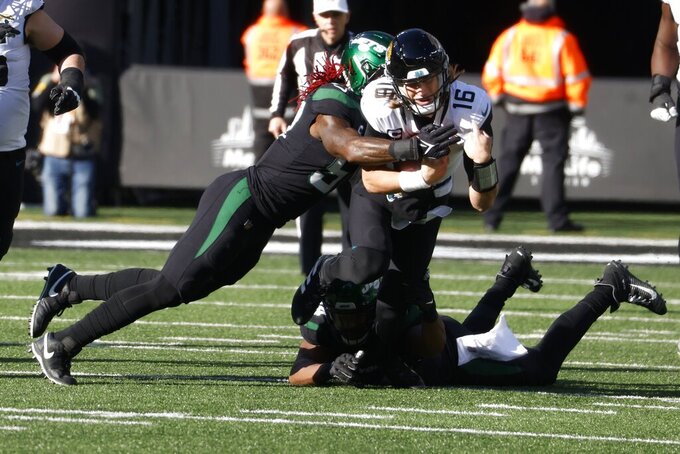 Every year, players in every NFL city fail to meet expectations. Sometimes it’s due to injuries and other times it’s simply poor performance.

The league could put together a talent-packed all-star team of players who came up well short for whatever reason this year. From rookie Trevor Lawrence to running back Christian McCaffrey to wide receiver Julio Jones, this year’s “All-Absent Team” is packed with star power:

Trevor Lawrence, Jaguars. The can’t-miss prospect can’t seem to throw a touchdown pass. The top pick in the 2021 NFL draft was supposed to be a generational talent, but he’s looked more like an Ordinary Joe as the face of the league’s most dysfunctional franchise. The former Clemson star has one touchdown pass in Jacksonville’s last eight games and has lost seven consecutive starts.

Christian McCaffrey, Panthers. The 2019 All-Pro was a popular early pick among fantasy owners expecting a bounce-back year after an injury-plagued 2020. Instead, it was more of the same for the former Stanford star who signed a four-year, $64 million contract extension in 2020 that made him the highest-paid running back in NFL history. McCaffrey missed five games early this season because of a hamstring injury and then landed on injured reserve for good with a badly sprained ankle.

Julio Jones, Titans. Tennessee traded a 2022 second-round pick and a 2023 fourth-round selection to Atlanta in the offseason for the seven-time Pro Bowl receiver and a 2023 sixth-round pick. The Titans also picked up his $15.3 million salary, but Jones has just 26 catches for 376 yards and no touchdowns in nine games.

Mekhi Becton, Jets. The second-year left tackle sustained a knee injury in the season opener and hasn’t played since. Becton had surgery the following week and was supposed to be sidelined two months at the most. It’s now been 14 weeks, but coach Robert Saleh insists the 6-foot-7, 370-pound behemoth nicknamed the Big Ticket didn’t have a setback and isn’t injury-prone.

Chase Young, Washington. The second-year pro was having a down year when he sustained a season-ending knee injury in mid-November. Young finished with 1½ sacks, three tackles for loss, four quarterback hits and a pair of forced fumbles. He was clearly getting more attention from opposing offenses after being named the Associated Press defensive rookie of the year in 2020 after recording 7½ sacks, 10 tackles for loss, 12 QB hits, four forced fumbles and three fumble recoveries.

Za’Darius Smith, Packers. The star pass rusher underwent back surgery in late September after being limited in the season opener. Green Bay has been able to handle his absence thanks to Rashan Gary and Preston Smith. The Packers have won 12 of their last 14 games. But there’s little doubt they would love to have Za’Darius Smith back on the field. He had been one of Green Bay’s most productive and impactful defensive players since signing a four-year, $66 million contract before the 2019 season. He started every game in 2019 and 2020 and totaled 107 tackles, 26 sacks and 60 quarterback hits.

Jaire Alexander, Packers. The cornerback has been sidelined since he injured a shoulder in Week 4. Surgery would have ended Alexander’s season. Instead, Green Bay took the patient approach and let the injury heal on its own. Alexander returned to practice this month and has been designated to return. He should end up back on the field in time for the postseason.

Eddie Jackson, Bears. The veteran safety has just one pass breakup in 12 games this season and doesn’t have an interception since the 2019 season finale. Chicago has allowed 28 touchdown passes, third-most in the NFL, and the fourth-most points in the NFC.

Rodrigo Blankenship, Colts. The place kicker landed on injured reserve in mid-October because of a hip injury that caused him to miss an extra point and two field goals in Indianapolis’ overtime loss at Baltimore. Michael Badgley, whose nickname is the Money Badger, has been nearly perfect since replacing Blankenship.