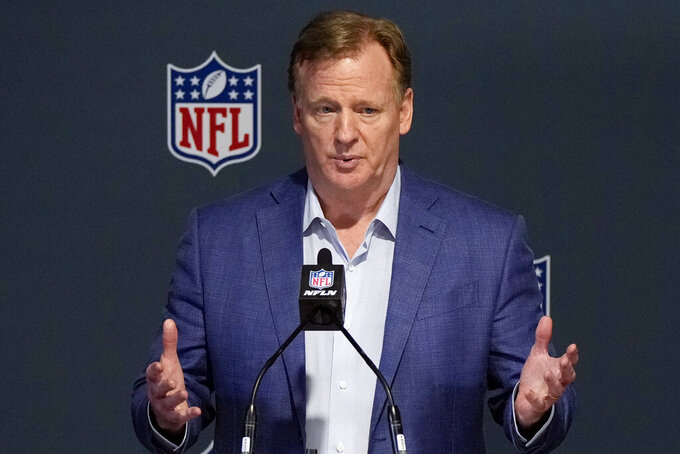 FILE - NFL Commissioner Roger Goodell speaks to the media after the close of the NFL owners' meeting on March 29, 2022, at The Breakers resort in Palm Beach, Fla. A judge on Thursday, Aug. 4, 2022, quickened the time it will take to rule whether Goodell gets to decide the merits of racial discrimination claims made by Black coaches against the league and its teams, saying that it appears an effort to gather more evidence is a try at “an impermissible fishing expedition.” (AP Photo/Rebecca Blackwell, File)

NEW YORK (AP) — Lawyers for three Black NFL coaches alleging racial bias by the league took aim directly at Commissioner Roger Goodell on Wednesday in their latest arguments against arbitrating a dispute they say belongs before a jury.

In papers filed in Manhattan federal court, the lawyers wrote that arbitration would allow “unconscionably biased one-sided ‘kangaroo courts’” to decide the outcome of the lawsuit filed in February by Brian Flores, who was fired in January as head coach of the Miami Dolphins. He is now an assistant coach with the Pittsburgh Steelers.

Their lawyers said Goodell, who would lead the arbitration if the case is not decided by a jury, could not be fair in overseeing and ruling on the dispute as to whether the league engages in systemic discrimination. They included in their submission articles about Goodell's salary and other personal details.

They cited the hundreds of millions of dollars he earns from teams, his public statement that the lawsuit is without merit and the likelihood that he could be a witness in the case.

In June, lawyers for the NFL and six of its teams said arbitration was required because the coaches had agreed in their contracts to multiple arbitration provisions “that squarely cover their claims.” They also said the coaches were required to go to arbitration individually rather than as a group.

Lawyers for the league and its teams did not immediately respond to requests for comment Wednesday from The Associated Press.

Letting Goodell preside over the case would “deviate from established authority and societal norms” and create a new standard for arbitration that would let it be approved “no matter how biased and unfair the process,” lawyers for the coaches said in their latest submission.

And they added that it would “embolden employers to create manifestly unfair arbitrations with assurance that they will be approved by the courts.”

“If the Court compels arbitration, scores of employers following this case, and those who learn of it, will undoubtedly change their arbitration clauses to permit the appointment of an obviously biased decision-maker,” the lawyers said.

Several weeks ago, U.S. District Judge Valerie Caproni denied a request by lawyers for the coaches to gather additional evidence before she rules on whether the case must go to arbitration.

That move made it more likely she'll rule on the arbitration issue within weeks rather than months.