Leonard returns to Colts' practice after being activated 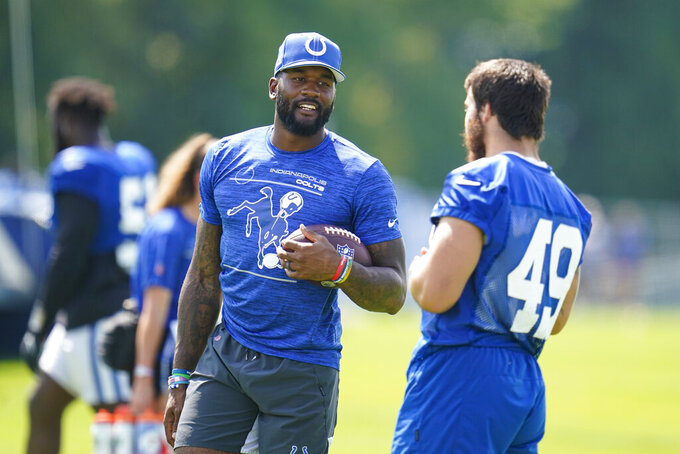 INDIANAPOLIS (AP) — Indianapolis Colts linebacker Shaquille Leonard was back on the practice field Wednesday, one day after he was activated from the physically unable to perform list.

It's still unclear when the three-time All-Pro will make his season debut.

The three-time All-Pro hadn't practiced since the end of last season.

Initially, Leonard was trying to work his way back from an ankle injury that hobbled him each of the past two seasons. Then in June, he had back surgery when doctors thought that would alleviate the pain. Still, he was never far away from football.

“He’s been incredible, being in every day at 5:45, meeting with the coaches, getting extra study time in,” general manager Chris Ballard said Wednesday. “But he's got to get his body ready. You can’t miss all that time and just go and be game ready. You’ve got to go get some practice, got to get some work on. So I can’t give you a timeline. Maybe Week 1, maybe Week 6.”

But Tuesday's decision at the roster cutdown could provide some clarity.

If Leonard started the regular season on PUP, he couldn't have played or practiced for four more weeks. And it would have likely taken a couple of more for Leonard to get in playing shape.

Now, he's at least eligible to play in the Sept. 11 season opener at Houston.

“We’ll work together with our training staff and docs and we’ll make a decision about when it’s best to get him going,” Ballard said. “He’ll be back when he’s back. You’ll know. He’ll be on the active (roster), you’ll all of a sudden see he’s not on the inactive (list) on game day.”

Safety Trevor Denbow, an undrafted rookie from SMU, will be put on injured reserve though Ballard said he doesn't expect it to be a season-ending injury. Denbow watched Wednesday's practice with a protective boot over his left foot.

Ballard didn't shed much light on the other big question heading into this fall — re-signing left guard Quenton Nelson. The three-time All-Pro is entering the final season of his rookie deal and Ballard said he's hopeful the two sides will reach an agreement.