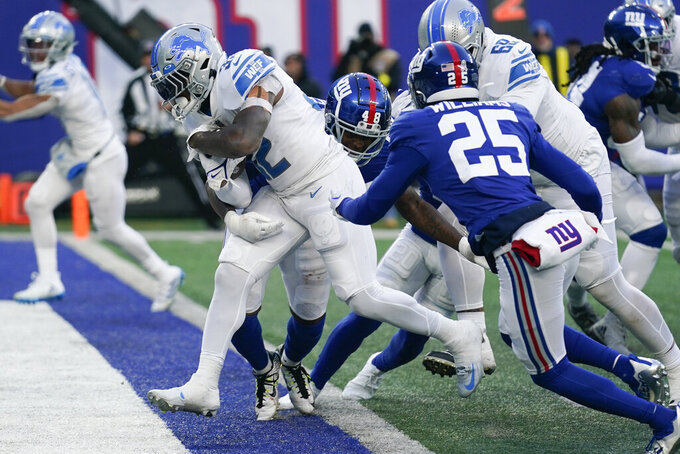 DETROIT (AP) — The Detroit Lions haven’t had a three-game winning streak in five years, so Monday would have normally been a day to enjoy.

Not on Thanksgiving week, though.

Dan Campbell and his coaching staff got one flight’s worth of relaxation out of Sunday’s 31-18 win over the New York Giants — a victory that has the Lions at 4-6 in what looked like a lost season.

“By the time we got back to the office last night, the Giants were done,” Campbell said Monday. “Everything was about the Bills.”

Every NFL team deals with short weeks these days — Thursday games have gone from a Thanksgiving tradition to a weekly occurrence — but the Lions and Cowboys and their holiday opponents still have to work a bit harder because they are the only ones playing on a Thursday afternoon.

“At some point, you go to bed for an hour or two, and then you start working again until you have a game plan.”

The coaches started installing the scheme for Buffalo on Monday, but the team won’t get the final pieces until a walkthrough on Thursday morning.

This year has an added twist — the Bills just played in Detroit after Sunday’s game against Cleveland was moved to Ford Field because of a massive snowstorm that hit the Buffalo area.

“That’s a talented team,” Campbell said. “They are playing good football, they’ve been in big games, and they know how to win them.”

The Lions are still last in the league in points allowed — 28.2 per game — but they’ve finally started to force turnovers. They only had six takeaways in their 1-6 start. But have gotten seven in wins over the Packers, Bears and Giants.

Detroit’s passing game is still looking for big plays. After 10 games, the Lions only have one 50-yard reception, and that went to TE T.J. Hockenson, who has since been traded to the Minnesota Vikings. However, WR Jameson Williams, the 12th overall pick in this spring’s draft, has started practicing with the team as he recovers from the knee injury sustained in the national championship game.

“He can run — we all know that,” Campbell said. “There’s going to be a learning curve, just like there is for every rookie, but we’re going to try to find situations where he can help us.”

RB Jamaal Williams had three rushing touchdowns against the Giants, giving him 12 in Detroit’s first 10 games. Seven of the 12 have come from a yard and 10 from inside the 10, but he did have a 51-yarder against the Seahawks in October.

Williams’ touchdowns have made up for the fact that, after a brilliant start to the season, D’Andre Swift hasn’t been able to stay on the field. In the first two games, he had 20 carries for 200 yards and five catches for another 62.

However, shoulder and ankle injuries have limited him to 25 carries for 73 yards in the past eight games.

CB Jeff Okudah (concussion protocol) will miss the Buffalo game — a big loss with Josh Allen and Stefon Diggs up next.

Three — In another lost year for Detroit sports, the city’s fans can enjoy the Lions taking a three-game winning streak into Thanksgiving for only the second time since the 1970 merger. The previous time was 2017, and they promptly lost 30-23 to the Vikings.

Spend the next three days trying to figure out how to stop Allen and Diggs.