Lions find new ways of self-destructing in loss to Bears 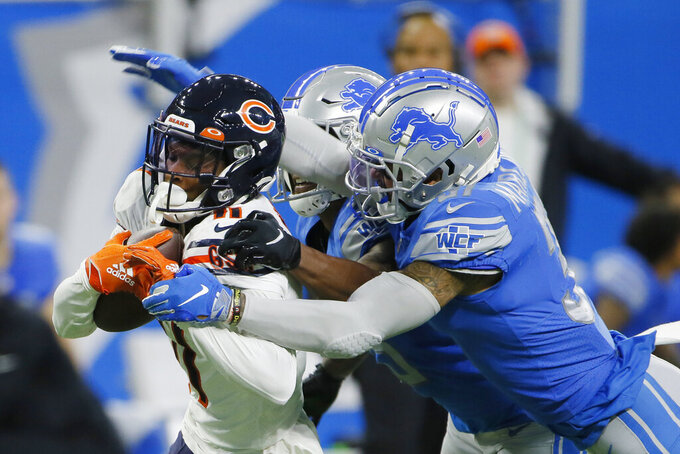 DETROIT (AP) — When the Detroit Lions punted with 8:30 left against the Chicago Bears, quarterback Jared Goff was already planning what his offense would have to do next.

It ended up as a waste of time.

“When we came off the field with all that time left, it never crossed my mind that we'd never get back out there,” he said. “I figured, at worse, we would be looking at a four-minute drive to win the game. Our defense had been fantastic all day.”

That defense, which has held three straight opponents to 16 or fewer points, couldn't get one more stop.

Chicago picked up five first downs and only had to convert twice on third downs. On third-and-5 from their 37, Andy Dalton hit Damiere Byrd for 13 yards, although a Lions holding penalty would have given Chicago a first down either way.

With Dalton taking as much time as possible, the Bears were facing second-and-10 from the Detroit 17 coming out of the two-minute warning. Julian Okwara stopped David Montgomery for a yard and the Lions called their first timeout.

Then they called their second one. That's not allowed.

With 1:54 to play and Chicago lined up for the crucial third-and-9, Lions coach Dan Campbell realized there was a problem.

“Half of our defense had one play call and half had another,” he said. “If I didn't do anything, they were going to score an easy touchdown.”

So Campbell called his second timeout, despite knowing the rule against back-to-back timeouts.

The Lions were called for defensive delay of game and lost the timeout. The Bears easily converted the third-and-4 against Detroit's soft coverage, Dalton knelt three times and Cairo Santos kicked the short field goal as time expired.

It was the third time the Lions had lost on a walk-off field goal, but this wasn't a record-setter like Justin Tucker's 66-yarder for the Ravens in Week 3 or even a long-range shot like Greg Joseph's 54-yarder for Minnesota in Week 5. This was a chip shot to end a game Detroit needed to win.

“We can look at these games as positives — we are staying competitive with some pretty good teams, but that actually makes it worse,” Lions tackle Taylor Decker said. “When you lose a game like this, every guy can look at the tape and find one thing he could have done to change the game. That hurts.”

For Decker and the offense, there were a lot of things they could have fixed. Goff went 6-for-6 for 64 yards on the Lions opening drive, finishing with a 39-yard touchdown pass to Josh Reynolds, but things went downhill in a hurry.

In the second quarter, with a first down at the Bears 29, the Lions were called for three straight penalties, making it first-and-30 from the 49. Goff completed two passes to running back Jamaal Williams, one for 4 yards and one for a 6-yard loss, and on third-and-32, Williams gained a yard on a draw.

“There aren't any plays set up for third-and-32,” Goff said. “That's not a situation that comes up very often.”

The Lions punted and the Bears only needed two plays to take a 10-7 lead on Dalton's 17-yard touchdown pass to Jimmy Graham.

The Bears kicked a field goal on the last play of the half to take a 13-7 lead, but Goff's touchdown pass to T.J. Hockenson put the Lions ahead by one late in the third quarter.

After the Bears punted, the Lions took over on their 10. They got the ball to their 47, but on second-and-7, they were called for a false start, followed by two holding penalties. Goff missed Reynolds on a deep ball leaving the Lions with, you guessed it, third-and-32.

This time, they called a screen pass, gained 7 yards, and never saw the ball again.

“This team isn't built to overcome third-and-32,” Campbell said. “No team is, but we certainly don't have the margin of error to overcome that many penalties. Our defense gave us a chance to win, like they have done so many times before, and we just couldn’t get out of our own way."