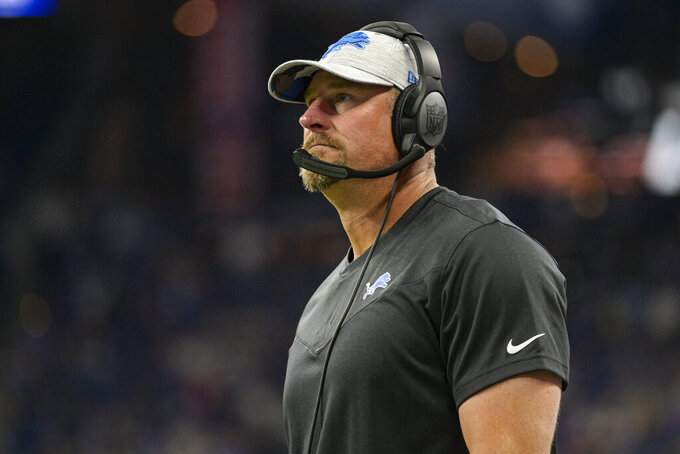 Detroit Lions head coach Dan Campbell watches from the sideline during first half of an NFL preseason football game against the Indianapolis Colts in Indianapolis, Saturday, Aug. 20, 2022. (AP Photo/Doug McSchooler)

The emotionally charged coach is convinced they took a big stride in the offseason, adding at least one key player on offense in free agency and drafting a potentially game-changing player on defense.

“We’re a lot further ahead than we were last year,” Campbell said Monday.

Following a season that saw opposing quarterbacks have plenty of time to pass, defensive end Aidan Hutchinson was drafted with the No. 2 pick overall to address what appeared to be Detroit's greatest weakness in 2021.

“All the preseason, all the camp stuff, it’s good, but man, you just want to get to that Week 1 and get into the season and get rolling," said Hutchinson, a former Michigan star playing near his hometown of Plymouth. “Just getting a little antsy."

The Lions learned how to win late in Campbell's first year, closing with a 3-3 record after losing their first eight games and starting 0-10-1. During training camp this summer, establishing a winning mentality was a top priority even in preseason games.

“It’s very important, especially with a young team and where we’ve been," Campbell said. “It has got to be part of our DNA. It has got to become part of who we are, and we have to embrace every moment and treat it like it’s your last moment.

“If you don’t and you just kind of accept it, then you’ll just be average or above average and that’s not good enough in this league."

Detroit desperately needs cornerback Jeff Okudah, drafted No. 3 overall in 2020, to bounce back from two injury-filled seasons that limited him to a total of 10 games.

“We have no concern about the Achilles," said Campbell, referring to the season-ending injury he had last year. “Physically he looks great. He needs reps."

The Lions were tied for last in the league with five passes of 40-plus yards. They attempted to address the problem by signing Chark and moving up in the draft to take Alabama's Jameson Williams No. 12 overall.

Detroit is banking on both bouncing back from injuries.

Chark, who signed a $10 million, one-year contract, played in just four games last year in Jacksonville. The fifth-year player had 73 receptions for 1,008 yards and eight touchdowns in 2019.

The Lions are practicing patience with Williams, who tore a ligament in his left knee during the national championship game and may not make his NFL debut until midseason. The speedy receiver averaged 20 yards a catch last season and scored 15 times.

Detroit also needs Goff to prove he has the ability to throw deep, a topic he is clearly tired of talking about.

“No, we don't do that here," Goff said, looking and sounding annoyed. “We don't throw the ball down the field at all.”

Campbell has put his players through physical practices, hoping to do a better job of preparing their bodies for the grind of a 17-game schedule.

“As long as this game still has pads, you have to do some of that,” he said.

The Lions have been featured on HBO's “Hard Knocks” during the preseason and the behind-the-scenes look at the team has made Campbell more popular among fans, who seem to appreciate his candor.

Campbell, though, said the feel-good buzz about him and the team will fade if Detroit doesn't win.

“You lose your first three games or something and all of a sudden, I’m getting run out of town and that’s the reality," he said.

The Lions possibly have a chance to get off to a much-needed strong start. They open the season with home games against Philadelphia and Washington and have a road game against Minnesota before coming back to Ford Field to play Seattle.

Detroit hosts Buffalo on Thanksgiving. Three of the last four games are on the road, including at Green Bay in the final week of the regular season.