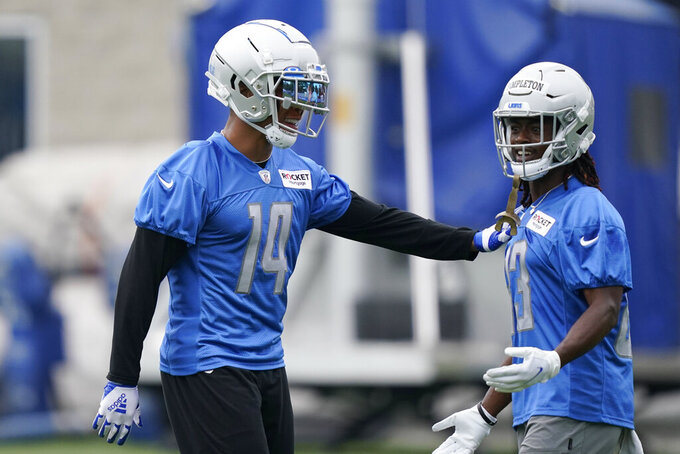 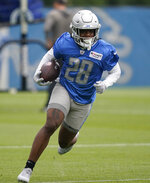 ALLEN PARK, Mich. (AP) — The Detroit Lions are optimistic that the needs they addressed in the offseason will make the second year under coach Dan Campbell much better than the first in 2021 when they won just three games.

“I do believe we got enough pieces in here to compete, I really do,” Campbell said on Wednesday, the first day of Lions training camp.

In the offseason, the Lions made a conscious effort to improve their passing game, which averaged just 6.6 yards per attempt, ranking 28th in the league. By signing wide receiver DJ Chark in free agency and using the 12th overall pick in the draft on Alabama wideout Jameson Williams — who starts camp on the non-football injury list — Detroit is hoping to stretch defenses.

That could also open up the middle of the field for their other playmakers: tight end T.J. Hockenson and second-year receiver Amon-Ra St. Brown.

It all starts with quarterback Jared Goff, who is in his second season in Detroit after being traded from the Los Angeles Rams in a deal that sent Matthew Stafford out west.

Goff not only has a upgraded wide receiver room, but he has an offensive line that features three first-round picks and a new offensive coordinator, Ben Johnson, who is attempting to tailor the offense to the strengths Goff displayed in his two Pro Bowl years in Los Angeles.

“The talent we have, the coaches, the O-line,” Goff said, “There’s no reason not to (have confidence).”

Defensively, the Lions drafted Michigan defensive end Aidan Hutchison with the second overall pick and re-signed Charles Harris after a 7 1/2-sack season in an effort to improve a pass rush that ranked 30th in sacks.

Campbell, however, says the defense will be relying heavily on the progress of the players from their previous year’s draft class. That includes two defensive linemen: Alim McNeill and Levi Onwuzurike and fourth-round linebacker Derrick Barnes.

“If they don’t make a jump, we’re in trouble,” Campbell said. “That’s the bottom line because those guys are kind of our core and our foundation.”

Another reason Detroit is entering this season with a sense of confidence is how hard it competed in 2021.

They also lost on last-second field goals to the Ravens, Bears and Vikings.

“It’s up to us collectively to find a way to turn some of those losses from last year into wins,” Campbell said. “You find a way to flip five or six of those games, and all of sudden you’re right there.”

That has left the Lions — a team that hasn’t won a division title since 1993 — unafraid to dream big this season.

“Obviously everyone’s ultimate goal is the Super Bowl, so I mean, why shoot for anything lower?” St. Brown said.

NOTES: Campbell announced that second-round pick Josh Paschal has a sports hernia and will remain on the physically unable to perform list for “a little bit” ... Hockenson said HBO’s “Hard Knocks” crew has already been noticeable at training camp. “You can sense a microphone over your head. It’s definitely interesting.”