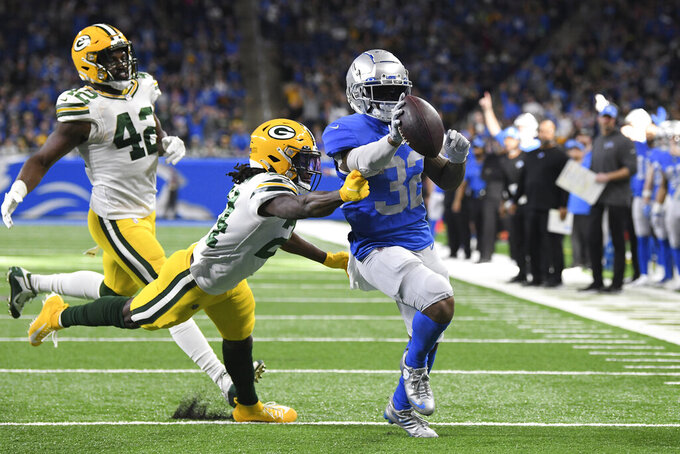 ALLEN PARK, Mich. (AP) — Dan Campbell leaned into a lectern and gripped it with both hands, looking and sounding slightly somber.

Leading the Detroit Lions and winning just three games will do that to you.

When the Lions hired Campbell nearly a year ago, he was perhaps as fired up as any coach could be at an introductory news conference as he talked about kicking teeth and biting kneecaps.

A day after Campbell closed his first season with a 3-13-1 record, he was subdued and perhaps that was because he had just fired offensive coordinator Anthony Lynn.

“He came here, took a leap of faith with us under the impression that he would be calling the plays," Campbell said Monday. “It was not going to go that direction."

Campbell said he isn't sure yet whether he will call plays on offense again next season.

“It’s what I think is best for us and as a team, and I need time to think about that," he said.

“I know (the Packers) took their guys out at halftime or some of them, but still they’ve got 13 wins with anyone playing and we beat them," Goff said. “We beat the Cardinals, we beat Minnesota, and those all happened in the last handful of weeks.

“Those give us reason for optimism that we kind of know how to do it now, know how to win."

Goff had a lot to do with it, throwing a total of eight touchdown passes with only one interception in the three home wins.

Goff was acquired from the Los Angeles Rams with a pair of first-round picks for Matthew Stafford. The first-year Lion gained a lot of respect from teammates throughout the season, especially in Week 18 when he pushed to play with a banged-up knee in a game that was relatively meaningless.

“To go out there and put your body on the line for us, that goes a long way for the players and the coaches,” said defensive end Michael Brockers, who was also a teammate of Goff's in Los Angeles.

The Lions had three players with 60-plus receptions in the same year for the first time. Those players — receiver Amon-Ra St. Brown, tight end T.J. Hockenson and running back D’Andre Swift — should all be back next season to try to pull off the feat again with Goff.

Hockenson said it will be tough for defenses to slow Detroit down next season, especially with St. Brown's emergence.

“They can't just hone in on one guy," said Hockenson, who had season-ending surgery on his left thumb last month.

St. Brown was the brightest spot on a dim season.

“It’s a credit to my teammates, credit to the coaches, to the people around me," he said. “Without them, I couldn’t have done what I’ve done this year. I think hard work, patience, opportunity, when those all come together, it’s awesome to see.”

Campbell took a lot of chances, with nothing to lose, and set NFL records along the way with 21 fourth-down conversions and 41 fourth-down attempts.

“I would like to believe the aggressive nature will stay, but that doesn’t necessarily mean that it will show up on fourth downs all of the time," he said two weeks ago.

General manager Brad Holmes, entering his second season, and Campbell have a lot of work to do with a team that has more weaknesses than strengths. The front office and coaching staff will evaluate the current roster, helping the team target its many needs in free agency and the draft.

Detroit will have the No. 2 selection overall on April 28 and could fill a void at defensive end with Michigan's Aidan Hutchinson or Oregon's Kayvon Thibodeaux.