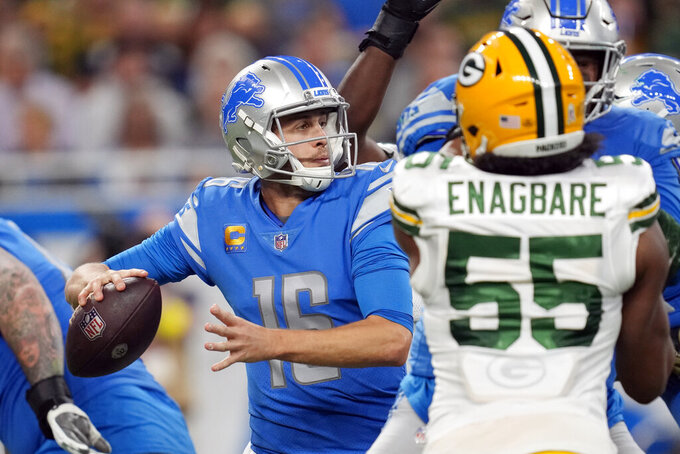 ALLEN PARK, Mich. (AP) — The Detroit Lions' season has followed the usual script. It began with optimism that everything was finally headed in the right direction. Then reality set in and they find themselves once again at the bottom of the NFC North standings.

Detroit snapped a five-game skid with a 15-9 home victory over floundering Green Bay on Sunday. But the Lions are 2-6 and, barring an unlikely turnaround, remain on the fast track to their 18th losing season in 22 years.

“I do feel like we’re going in the right direction,” coach Dan Campbell said. “I know the wins are not there, though we just got one. I like the improvement. I would like to be in a better place than we are, certainly. I feel like we should have at least two more wins here and that’s on me.”

Campbell has made some curious in-game decisions but the losses have been a potpourri of frustration. A late rally against Philadelphia in the opener that fell short. A defensive meltdown against Seattle. Blown fourth-quarter leads against Minnesota and Miami. An offense that failed to score a touchdown against New England and Dallas.

“As far as looking back, it will do me no good,” Campbell said. “I don’t want to dwell on all that, what could have been. Make the corrections and we move on.”

The organization seemingly raised the white flag by dealing tight end T.J. Hockenson to the Vikings at the trade deadline. But the defense stood tall against the Packers as Green Bay went 0-for-4 in the red zone.

That was an aberration, in part because Detroit doesn’t have enough playmakers. The No. 2 overall pick in the draft, defensive lineman Aiden Hutchinson, had an interception on Sunday and leads the team in sacks but the overall talent is lacking.

Quarterback Jared Goff has posted respectable numbers -- 14 passing touchdowns and a 255-yard-per-game average -- but has committed some untimely turnovers.

The Lions could move on from Goff by releasing him after the season at a cost $10 million in dead cap money. With a high draft pick, they could replace him one of the three top-rated quarterbacks in next year’s draft — Alabama’s Bryce Young, Ohio State’s C.J. Stroud or Kentucky’s Will Levis.

Goff doesn’t have the mobility to escape the pass rush very often but he’s got a solid offensive line in front of him.

He’s only been sacked 13 times, with five of those coming against Dallas’ fearsome pass rush.

The Lions have also executed plenty of chunk plays. They have 31 plays this season of 20 or more yards, tied for the fourth most in the league.

Aside from the spirited performance against Green Bay, the Lions’ defense has been nonexistent.

Even with the statistics from the Packers game added in, Detroit still ranks last in points allowed (29.2 per game) and total yards allowed (417.2).

Until the Lions picked off three passes by Aaron Rodgers on Sunday, including a couple of bizarre end-zone takeaways, they had only two interceptions.

With Hockenson in a Vikings uniform, the remaining tight ends on the roster have a chance to get involved in the passing game.

Mitchell tore his ACL during his senior year at Virginia Tech and slid into the fifth round of the draft. He could emerge as the top receiving threat.

Running back D’Andre Swift came into the season with the lofty goal of posting 1,000 rushing yards and 1,000 receiving yards, a feat only accomplished by three players in NFL history.

Swift got off to a good start in the rushing category, gaining 144 yards in the season opener against Philadelphia.

Shoulder and ankle ailments have since derailed his plans and hampered the team’s offense.

He missed three games and has been just a part-time player in the past two games. He had a 20-yard reception against Green Bay but otherwise had just four touches.

DB Kerby Joseph, who had two interceptions on Sunday, has been placed in the league’s concussion protocol.

12 — Even with the addition of Hutchinson, the Lions have recorded a dozen sacks in eight games. That's tied with Atlanta for the second fewest in the league. Hutchinson has 4 1/2 of those sacks.

The Lions, who play at Chicago on Sunday, can continue to evaluate their roster and even throw some of their practice squad players into the mix to see who they want to retain next season. They could take a look at rookie wide receiver Jameson Williams later in the season if he’s ready to return from his knee rehab. They made a draft-day trade with the Vikings to select the former Alabama standout with the No. 12 pick, knowing he’d miss at least a portion of the season after he tore his ACL in the national championship game.