Lions take Hutchinson at No. 2, trade up to take Williams 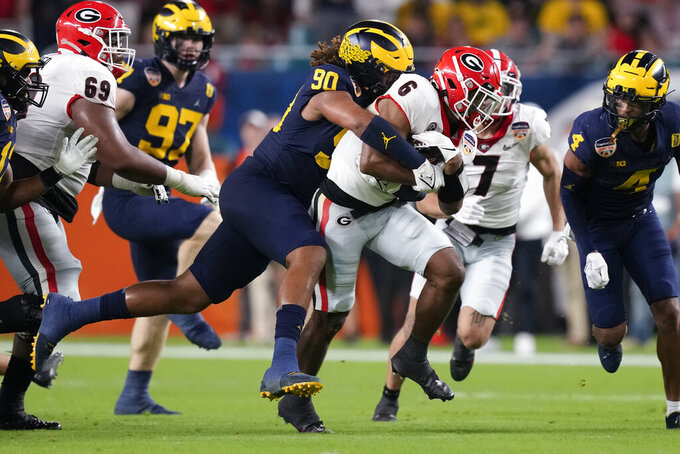 FILE - Georgia running back Kenny McIntosh is tackled by Michigan defensive end Mike Morris during the second half of the Orange Bowl NCAA College Football Playoff semifinal game, Friday, Dec. 31, 2021, in Miami Gardens, Fla. In his fourth season, the 6-foot-6, 278-pound Morris will have a lot of chances to make plays from a position that produced NFL prospects Aidan Hutchinson and David Ojabo last year. (AP Photo/Rebecca Blackwell, File) 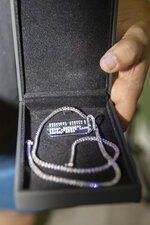 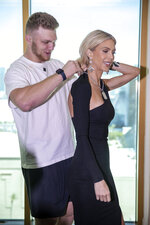 ALLEN PARK, Mich. (AP) — Aidan Hutchinson surprised his mother with a gift on draft day and then the Detroit Lions made his wish come true.

The Lions grabbed the talented Michigan defensive end with the No. 2 pick in the NFL draft Thursday night, barely using its allotted five minutes to address a desperate need with a hometown star who was the runner-up for the Heisman Trophy this past season.

“The whole draft process, I wanted them to pick me," he said.

When Hutchinson’s name was called in Las Vegas, Hutchinson hugged his parents and two sisters before going on stage. His father, Chris, was a Michigan captain and Big Ten defensive lineman of the year in 1992.

Earlier in the day, Hutchinson carried out a sweet surprise for his mother, Melissa, by giving her a Leo Frost-designed necklace with a dog tag to honor her grandfather and World War II veteran.

“That was cool to have that moment shared with her," he said.

Detroit went into the draft with eight picks, including No. 2 and No. 32 at the end of the first round. It used all the assets to make an aggressive trade with an NFC North rival to move up and take Alabama wide receiver Jameson Williams at No. 12, which they acquired from Minnesota in a swap for Nos. 32, 34 and 66 overall.

“It wasn’t going up just to get a receiver, it was going up to get him," general manager Brad Holmes said.

Detroit gave up a lot and landed the No. 46 selection overall in addition to the former Crimson Tide star.

Williams gives veteran quarterback Jared Goff a big-play threat, but the speedster may need time to get healthy after tearing a knee ligament in the national championship game. Williams said he is pushing to be ready by training camp.

Williams transferred to Alabama from Ohio State, where he played behind Garrett Wilson and Chris Olave for two years. Wilson was drafted No. 10 overall by the New York Jets and New Orleans took Olave one pick later.

“We always knew we had the talent," Williams said. “We competed with each other and got each other better."

Goff is surrounded by solid players on the line, at tight end and running back, but they definitely needed help at receiver. The Lions seem to have more needs on defense.

Until recently, the Jaguars were expected to select Hutchinson at No. 1 but went with Georgia defensive end Travon Walker instead. That gave Holmes a chance to draft Hutchinson, the best player on the team's board, in his second draft with the franchise.

“We had no idea if Aidan was going to be there or not," Holmes said. “It was a very unpredictable first half of the draft."

“He’s so much of a culture fit," Holmes said.

The Lions certainly can use his help, slowing down offenses and firing up fans tiring of their losing ways. The Lions lost their first eight games last season and went 0-2-1 over the next three before finally winning a game under Campbell and closing with three wins over the last six games.

Detroit averaged just 1.8 sacks last year, ahead of only Atlanta. The Lions gave up 5.9 yards per play and 27.5 points per game, two more categories at the bottom of the NFL.

“He’s going to change the dynamic of this team just by his presence and how he plays," Detroit defensive coordinator Aaron Glenn said of Hutchinson. “He’s a true fit in every way."

Detroit's rebuilding plan included trading quarterback Matthew Stafford to the Los Angeles Rams for Goff and the two first-round picks along with a first-rounder next year.

First up in that haul was Hutchinson, who set a single-season school record with 14 sacks for the Wolverines last season. He is the highest-drafted defensive player in Michigan history, and the highest pick Detroit has invested in an edge rusher.

The Lions have had mixed results with its top picks of late. Oregon offensive tackle Penei Sewell, picked by Detroit at No. 7 last year, has helped the line become one of their strengths. Ohio State cornerback Jeff Okudah, the No. 3 overall pick in 2020, has not panned out so far due to injuries.