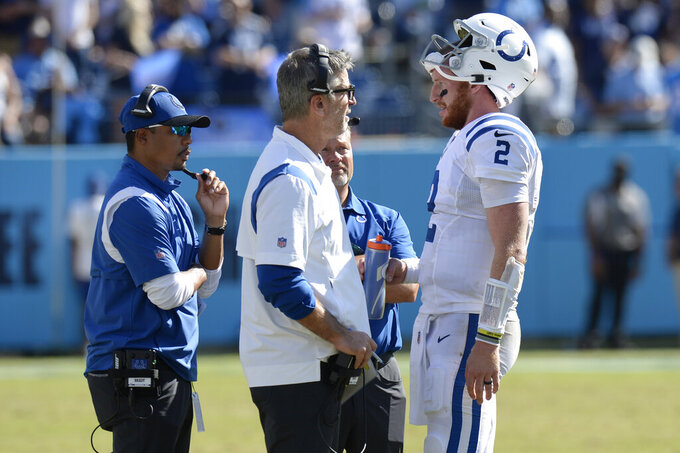 Starting quarterback Carson Wentz has two sprained ankles. 2020 All-Pro left guard Quenton Nelson's streak of consecutive starts is in jeopardy because of a sprained right ankle. Linebacker Darius Leonard, also an All-Pro last season, has been slowed all season by, yes, an injured ankle. And Indy may be without right tackle Braden Smith for a third straight game because of a strained foot.

Sure, it's making preparations for Sunday's game at Miami difficult, but Reich knows this is life in the NFL.

“When a guy is injured, he’s injured, so we adapt and we adjust," Reich said. “Is that one week or two weeks, or three? I don’t know. We just kind of play it as we go. No excuses though. We’re 0-3. We own that, that starts with me. Getting our offense to play better and Carson to play at the highest level possible starts with me."

Wentz did limited work Wednesday and hopes to be full-go Thursday and Friday. That's major progress after getting through only one practice last week. Still, Wentz started at Tennessee and, despite having his mobility severely limited, finished the game without any major setbacks.

On Wednesday, Wentz acknowledged he's still sore and the right ankle remains more problematic than the left. But he's ahead of where he was a week ago and believes he'll start again this week for the winless Colts.

“Way better," Wentz said when asked to compare the injuries from week to week. “I don’t think I’ll be full practicing but just the fact that I’ll be able to go out there and do some limited work, I was not in that place by any means last week."

The bigger concern now is Nelson, who has started all 54 games including playoffs since Indy drafted him with the sixth overall pick in 2018. He was injured during the first half in the loss to Tennessee and did not return. Nelson already missed three weeks of training camp after having surgery on his right foot, his third surgery since the end of last season.

“I’m not ready to rule him out or anything like that," Reich said. “He’s a quick healer, but probably not optimistic about this week."

If Nelson doesn't play, it would be yet another obstacle for a line that has underperformed while trying to plug holes. Chris Reed took over against the Titans.

Left tackle Eric Fisher missed the season opener while recovering from a torn Achilles tendon and has not yet regained his Pro Bowl form. Smith missed the last two games with a strained foot and did not practice Wednesday. Julie'n Davenport replaced Fisher in Week 1 and filled in for Smith the past two weeks.

The result: A unit that allowed the second-fewest sacks from 2018 through 2020 and cleared the way for two straight 1,000-yard rushers has given up eight sacks in three weeks while the running game has largely been stymied.

Reich knows the inability to get a starting five working together in practice hasn't helped.

Leonard, meanwhile, had ankle surgery in June and continues playing through pain that has limited his practice time. But he hasn't missed a game and doesn't expect to start now — especially in the midst of a losing streak.

“It bites at times on certain movements, but you fight through the pain and find a way to get the job done," he said. “That’s what I’ve been taught my whole life. You don’t make excuses, you find solutions and just go out and play. You want to be out there and make sure you do enough to help this team win."