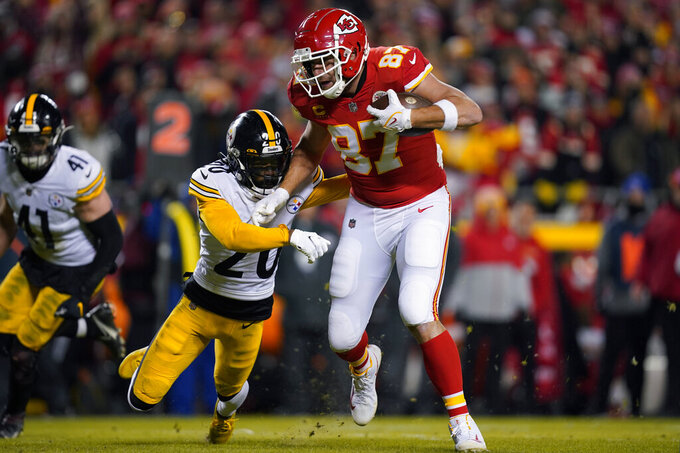 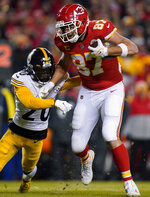 KANSAS CITY, Mo. (AP) — The Chiefs were going nowhere on offense against Pittsburgh early Sunday night, so coach Andy Reid had wide receiver Mecole Hardman take a shotgun snap and hand off to running back Darrel Williams on a trick play.

Their exchange hit the ground, T.J. Watt picked it up and returned the fumble for a touchdown.

It was precisely the kind of play that should have energized the heavy underdogs, playing in a tough environment on the road, but it wound up doing something else entirely: It ticked off Chiefs quarterback Patrick Mahomes.

He proceeded to throw for 404 yards and five scores, leading Kansas City to the end zone on six straight possessions after the turnover, and the Chiefs cruised through the second half for a 42-21 wild-card victory.

“We were all pissed at ourselves,” Mahomes said. “We weren't playing with enough energy. We weren't playing at a high enough level. We all motivated ourselves. Everyone was talking to each other, and we came out with a different urgency.”

Byron Pringle caught touchdown passes from both Mahomes and Kelce, and Jerick McKinnon and Tyreek Hill also had scoring catches, while the Chiefs (13-5) shut down the retiring Ben Roethlisberger and the Steelers offense.

The performance not only sent Kansas City into the divisional round of the playoffs, it also turned next Sunday night's game against Buffalo — a rematch of last year's AFC title game — into appointment viewing. The Bills had a similarly easy time with their 47-17 victory over New England on Saturday.

“When you’ve been to the Super Bowl the last two years and you walk off that field with a loss last year, you want to go back and get that revenge, get that win,” Mahomes said. "We have the Bills coming here this next week and we’re going to have to play our best football.”

Roethlisberger, who acknowledged the Steelers (9-8-1) were “not a very good football team” this week, wasn't very good in his own right. The 39-year-old quarterback was 29 of 44 for 215 yards with two meaningless TD passes late in the game, providing the coda to a career that includes six Pro Bowl trips and two Super Bowl wins.

“I mean, we lost. It stinks. But when you get to the tournament, only one team is going to end the season the way you want,” Roethlisberger said. “I will say, I'm proud of the way our guys fought tonight.”

Judging by the final score, you'd never guess the first quarter was all about defense: The Steelers ran 14 plays and went 12 yards, while the Chiefs had more punt return yards (70) than they had from scrimmage (62).

Made sense that the first points would be scored on defense, too.

After the Steelers punted for a fifth straight time, the Chiefs inexplicably had Hardman take a snap rather than their four-time Pro Bowl quarterback. Williams bobbled the exchange, Watt grabbed the fumble and Pittsburgh had a 7-0 lead.

Mahomes responded by completing his next six passes, capping a 76-yard drive with a nifty underhand flick to McKinnon that tied it. Then the brilliant young quarterback found Pringle in the corner of the end zone for a score, and he put an exclamation mark on the half by hitting Kelce with a 48-yard touchdown strike.

In the span of less than six minutes, Mahomes and the Chiefs had turned a seven-point deficit into a 21-7 lead.

“You know what? I didn't have to say much,” Reid said. “The players know better than anybody when there's a screwup. They beared down. Nobody was hanging their head. They said, ‘Let’s go. We need to amp it up here a little bit.'"

It wasn't quite the 23-0 halftime advantage the Chiefs had in their December blowout of the Steelers, but it sure felt that way. Roethlisberger was 5 of 14 for 24 yards in the first half and Pittsburgh had 55 yards total offense.

Not much of a retirement party if Roethlisberger indeed calls it quits.

“I don't think any of us played well,” he said. “We didn't make the plays we had to early to give ourselves a chance, and doing that, we didn't keep our defense off the field. Those are tough situations to go against such a high-powered offense.”

As for the Chiefs, their celebration started in earnest after Mahomes led them on another TD drive to start the second half. The game was such a laugher by that point that when Hill was ruled down just shy of the goal line, Mahomes simply threw his next pass on third-and-goal to offensive tackle Nick Allegretti for the score.

Hill got his TD catch eventually; it came after Steelers rookie Najee Harris lost a fumble for the first time all season.

The Chiefs kept scoring, too — Kelce's mom, who began the day watching her other son, Jason, and his Eagles lose in Tampa Bay, got to see her younger son throw a TD pass in the fourth quarter. By that point, the Chiefs had scored so often, they had to post a message on the Arrowhead Stadium video boards that they had run out of fireworks.

Mahomes and the rest of the Chiefs had provided enough of their own.

“As opposed to coming in here and talking about the things we didn't do — I just expressed it to the football team — the classy thing to do is compliment the Kansas City Chiefs,” Steelers coach Mike Tomlin said. “They have a really good football team, they have an explosive team, and they did a really good job tonight.”

Steelers: Their ego was severely bruised.

Chiefs: CB Rashad Fenton hurt his shoulder before the game.

Pittsburgh heads to the offseason contemplating how they might replace their long-time starting quarterback.

The Chiefs welcome Buffalo next Sunday night for a rematch of a game the Bills won 38-20 in October. Mahomes threw three TD passes in a 38-24 victory for the AFC crown last January.