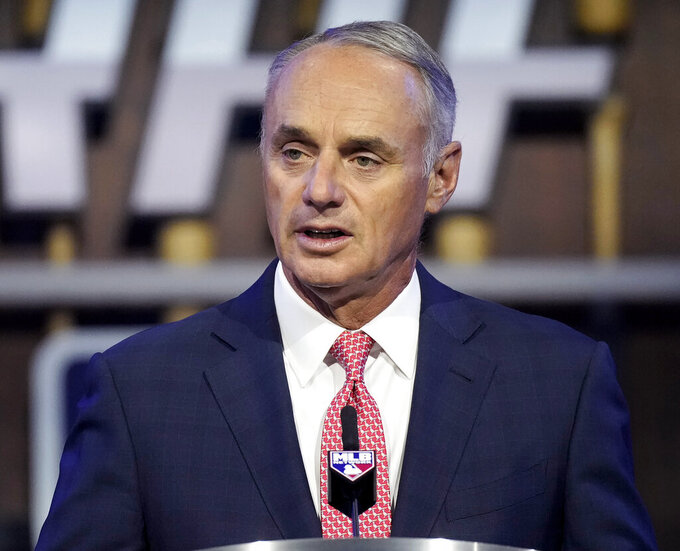 FILE - In this July 11, 2021, file photo, Major League Baseball Commissioner Rob Manfred kicks off the first round of the 2021 MLB baseball draft in Denver. As the World Series shifts to Atlanta, some TV viewers may be offended to see Braves fans still chopping and chanting. After teams in the NFL and Major League Baseball have dropped names viewed as offensive to Native Americans the last two years, the Braves chop on. The tomahawk chop has the support of baseball commissioner Rob Manfred. (AP Photo/David Zalubowski, File)

ATLANTA (AP) — As the World Series shifts to Atlanta, some TV viewers may be offended to see Braves fans still chopping and chanting in force.

After teams in the NFL and Major League Baseball have dropped names considered racist and offensive to Native Americans the last two years, the Braves chop on — with the support of baseball Commissioner Rob Manfred.

What matters most to Manfred is the Braves have the support of the Eastern Band of Cherokee Indians, based in North Carolina about three hours from Atlanta.

Manfred's decision to accept input from only one Native American group doesn't sit well with the Oklahoma-based Muscogee Nation.

“I think on a subject like that and when you’re dealing with Indian country you have to look at it as a whole instead of one or two specific places,” Jason Salsman, press secretary for the Muscogee Nation, told The Associated Press on Thursday.

“You have to look far and wide and how all Indian nations feel.”

Richard Sneed, principal chief of the Eastern Band of Cherokee Indians, would like to see more outrage about what he says are far bigger issues facing Native Americans, including poverty, unemployment, child abuse, sexual assaults and suicide.

“I’m not offended by somebody waving their arm at a sports game,” Sneed told the AP on Tuesday. “I’m just not. If somebody is, that’s their prerogative, it’s their right. They can be offended. ... I don’t know very many, maybe one or two, from my tribe who say, ‘Yeah, I don’t like that.’ But at the end of the day, we’ve got bigger issues to deal with.”

Sneed said the problems with crime and poverty remain largely ignored when the national attention has been on team names and the tomahawk chop.

“There’s just so much happening and the frustrating part for me as a tribal leader is when the only issue that seems to be discussed is ... ‘How offended are you by the chop and should the Braves change their name?’ ... Really, it’s the least of our problems, I guess is what I’m saying."

There is no indication the Braves plan to change their name or discourage the chop, which has been a tradition for their fans since the early 1990s. Former Braves outfielder Deion Sanders is credited with bringing the chop, which was part of his college football background at Florida State, to Atlanta.

The Braves are following the lead of Florida State and the minor league Spokane Indians in nurturing relationships and developing support from local Native American groups.

The Braves temporarily attempted to deemphasize the chop in the 2019 NL Division Series against St. Louis after Cardinals reliever Ryan Helsley, a member of the Cherokee nation, said he found it insulting.

Following Helsley's complaint, the Braves stopped distributing the red foam tomahawks used by fans doing the chop during the series. They also stopped having the accompanying music played to encourage the chant.

The coronavirus pandemic emptied stadiums and took attention away from it.

Now fans have returned and the chop is fully revived, complete with drumbeats, stadium music and the tomahawk images posted on video boards around Truist Park.

From Georgia Gov. Brian Kemp to University of Georgia standout defensive tackle Jordan Davis to Braves fans, there is widespread local support for the chop.

Kemp wrote “Chop On, and Go @Braves!” on his Twitter account after Atlanta beat the Los Angeles Dodgers in the NL Championship Series.

Davis, asked Monday if he was pulling for the Braves, said: "Definitely. Chop on Braves. We’re definitely rooting for them.”

Braves fans even brought the chop and chant to Houston. A small number of fans began doing the chop when the Braves took an early lead Tuesday night in Game 1 and remained in the stadium to pick up the chop again following a 6-2 win.

No dissenting opinion on the chop could be found from a line of fans who were waiting to buy World Series tickets Tuesday morning at Truist Park.

“It’s freaking awesome,” said Sarah Oldham. “I think it’s part of our winning strategy, making all that noise at the stadium. It’s like voodoo going on. I’d be afraid.”

Said Caleb Godfrey, who works near Truist Park: “I like it. I love it,” when asked about the chop.

"I understand both sides of the argument for it and against it, but I also don’t feel like it’s a Redskins scenario where it’s offensive,” Godfrey said.

The Braves declined to comment on their renewed support of the chop.

Sneed said Redskins was “the only name I felt was derogatory. Yeah, that’s offensive. The rest of them never really bothered me and still don’t bother me to this day."

The Braves dedicated their July 17 game against Tampa Bay to the Eastern Band of Cherokee Indians. The team said the night will be an annual event designed in part to educate fans on the history and culture of the group.

The Braves have placed a “We are still here” display in their stadium's Monument Garden. The display is designed to educate fans on the EBCI's history.

Sneed said the Braves have “really been instrumental and really a trailblazer in setting an example for using their platform because it is a national platform and in some cases international.”

Manfred also praised the Braves, saying "they’ve done a great job with the Native Americans” in the region.

“The Native American community is the most important group to decide whether it’s appropriate or not and they have been unwaveringly supportive of the Braves,” Manfred said.

The Harrah's Cherokee Resort and Casino in Cherokee, North Carolina, is a Braves sponsor.

“That’s separate from what we do on the governmental side,” Sneed said, adding he and other elected officials on the tribal council “don’t have any input or any say in that.”

The casino generates funds “so we have the resources to really help our people, especially when dealing with things like substance abuse, mental behavioral issues and so forth,” Sneed said. “So we’re fortunate.

“But I’m also very cognizant of the fact there are ... a lot of tribes that still live in abject poverty with extremely high rates of unemployment.”

Sneed said he sees the relationship with the Braves “as one where it gives us a platform to be able to discuss the issues that are really important to Indian country and that need to be addressed.

“They’re not new issues for us. They're things that tribal nations have dealt with really since government intervention and the Indian Removal Act and tribes being forced off their reservations.”

The support of Sneed's group means everything to Manfred, who didn't waver when pressed on the Braves' chop.

Might other Native Americans be offended by the chop?

“I don’t know how every Native American group around the country feels,” Manfred said. “I am 100% certain that the Braves understand what the Native American community in their region believes and that they’ve acted in accordance with that understanding.”