Marcus Mariota vs. Von Miller: something has to give Sunday 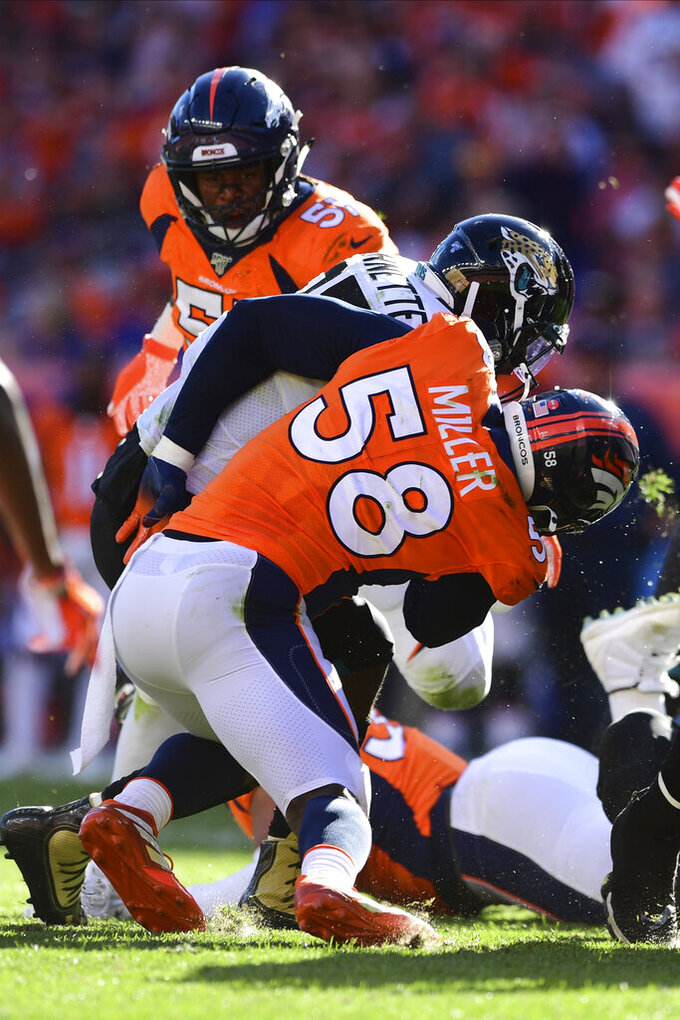 Denver Broncos linebacker Von Miller (58) stops Jacksonville Jaguars running back Leonard Fournette (27) on a carry during the second half in the NFL game in Denver Sunday, Sept. 29, 2019.(Eric Bakke via AP)

The Broncos star linebacker is off to the slowest start of his nine-year career with just two sacks in Denver's 1-4 start under coach Vic Fangio.

Tennessee's quarterback has been sacked 22 times, second-most in the NFL and by far the largest number he's ever suffered through his first five weeks in his five-year career.

The Titans (2-3) expect to fortify their line with left tackle Taylor Lewan shaking off the rust of his four-game suspension and guard Kevin Pamphile returning from a knee injury that sidelined him for the first five games.

Miller lost his pass rush partner Bradley Chubb to a season-ending knee injury two weeks ago, and the Broncos are moving him around more as a result, although Fangio cracked that unless he could change Miller's No. 58 jersey opponents will know where he is at all times.

No matter where he lines up, Miller is dangerous.

"You've got to be very conscious of him," Titans coach Mike Vrabel said. "Von, I've known him since he's been a young player coming out of college. Very disruptive, explosive and instinctive football player that can wreck plays before they get going."

Miller hasn't had the immediate impact everyone expected when Fangio arrived in Denver, but the Super Bowl 50 MVP this week sacked the notion the two have a rocky relationship over his head coach's constant critiques.

Another fan of Fangio's frankness is general manager John Elway, who said on his weekly 850 KOA show that "everybody needs to be challenged. When you're going through tough times like we are right now, your great players have to play great. That's why what I like about Vic is he's challenging everybody. It doesn't matter if you're Von Miller or anybody else, the 53rd guy. He's going to challenge you and push you and try to get the best out of you, and I think that's great."

Fangio isn't even Miller's harshest critic — that would be Miller, himself.

He suggests that even if he's disrupting drop-backs or stuffing the run, what he measures himself by are sacks, and those have been hard to come by this season.

Other subplots Sunday when the Broncos honor Hall of Fame inductees Pat Bowlen, who died last summer, and Champ Bailey, whose name will be added to the team's Ring of Fame:

Fangio is glad Cody Parkey is getting another chance. The kicker whose Double Doink ended Chicago's run last season and led to his release from the Bears signed on with the Titans this week following Cairo Santos' 0-for-4 performance in Tennessee's 14-7 loss to Buffalo. "Good for him, good guy. I'm happy for him," said Fangio, the designer of the Bears' defense who joined the Broncos after that wild-card loss to Philadelphia.

Titans captain and 12th-year linebacker Wesley Woodyard returns to Denver, where he spent six seasons, for the first time since reviving his career in Nashville in 2014. "I'm excited to go back. Been waiting on this for six years," Woodyard said. "I loved playing in the Mile High, and it's going to be a great atmosphere." Woodyard is a backup now with 2018 first-rounder Rashaan Evans and Jayon Brown starting inside.

The Titans have done one thing very well this season in not turning the ball over. They are just the sixth team since the 1970 merger to go through the first five games with just one turnover. Mariota is the NFL's only QB to start five games this season without a turnover. He has the NFL's longest active streak of passes thrown without an interception at 191. Titans' lone turnover was a muff on a punt return by Adoree' Jackson.

Filling in for Josey Jewell (hamstring), Broncos inside linebacker Alexander Johnson and had nine tackles, two pass breakups and an end zone interception last week in his first start since Nov. 15, 2014, for Tennessee vs. Kentucky. "That's certainly a guy that we're going to have to be aware of," Vrabel said.

The Broncos' secondary has been hit hard by injuries. Cornerback Bryce Callahan (foot) has yet to make his Denver debut and De'Vante Bausby went on injured reserved this week with a neck injury that left him paralyzed for 30 minutes. The Broncos replaced him with eight-year pro Coty Sensabaugh, who's eager to prove he should have been in somebody's training camp this summer.