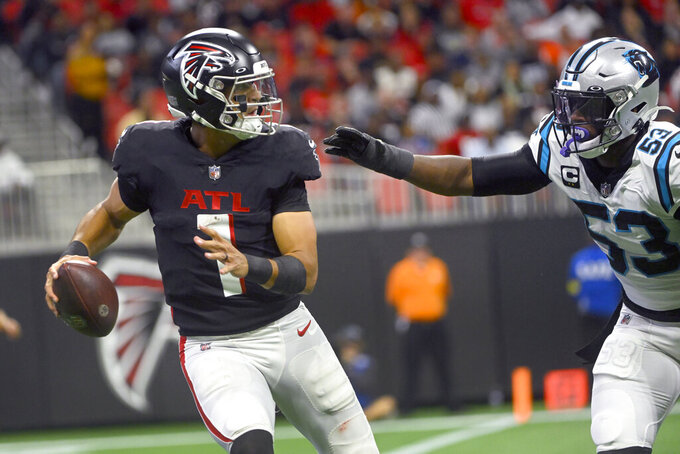 ATLANTA (AP) — Falcons quarterback Marcus Mariota just wanted another chance to pull out a victory after he threw an interception on the first possession of overtime.

Three plays after C.J. Henderson returned the pick 54 yards, it still looked bleak for Atlanta as Carolina sent out kicker Eddy Piñeiro to try a winning 32-yard field goal. But Mariota and the Falcons got just the break they were looking for when Piñeiro missed wide left.

“Sometimes when you get into situations like that, guys kind of put their head down,” Mariota said. “Nobody did that on the sideline. For me, it’s really cool to be a part of that, and it says a lot about our guys.”

Mariota atoned for his second pick of the day, helping seal the win on third-and-1 with a 30-yard scramble that set up Younghoe Koo’s 41-yarder, and the Falcons escaped with a 37-34 victory.

It wasn’t a designed play. Mariota simply took off when he saw a wide swath of uncovered territory and made the most of it.

“That’s why we believe in Marcus,” Atlanta coach Arthur Smith said. “Not many guys can make that play, and the moment is never too big for him.”

Mariota’s first season with the Falcons has gone about as well as predicted. The 29-year-old former second overall pick for Tennessee in 2015 has managed the game the way Smith wants. Atlanta runs a mostly run-first offense and rarely takes many deep shots.

He has a passer rating of 92.7 and has 10 touchdowns and six interceptions. His first pick of the game, a deep ball intended for Damiere Byrd, had no consequence.

“I have to be better, got to be cleaner," Mariota said. “You know, again, like I said, our guys, they don’t blink. Good plays, bad plays, they stay pretty even-keeled, especially when these things happen. When bad things happen, our guys are ready to step up to make a play. Our guys did.”

At 4-4, the Falcons are alone in first place in the struggling NFC South, something few foresaw in the preseason when the Falcons looked to spend the year in rebuilding mode.

“You’re never out of it,” Smith said. “That was one of the craziest games I think I’ve ever been a part of. Happy to get the win any way we can, but I think I got a little grayer today.”

The running game continues to be a strength. Atlanta ran 37 times for 4.5 yards per carry. Caleb Huntley led the attack with 91 yards on 16 carries and had a 30-yarder. Smith isn't going to make any big changes to his approach as long as the Falcons hold their own at the line of scrimmage.

“It’s about being unselfish and just trusting your teammate," Huntley said.

Atlanta began the game with the league’s worst pass defense and an injury-riddled secondary that was missing three starters. P.J. Walker passed for 317 yards, but it could have been much worse, particularly if D.J. Moore hadn't drawn an unsportsmanlike conduct penalty for pulling off his helmet following a 62-yard TD catch with 12 seconds remaining.

The result of the penalty pushed the extra point back 15 yards, and Piñeiro missed the 48-yard attempt that would've won it in regulation.

“I’ve never seen a ball be thrown like that, either," Atlanta cornerback Darren Hall said. “On the run, (62) in the air in the breadbasket. He threw a great ball. D.J. Moore made a play, then took his helmet off and gave us a chance with that flag. You don’t want things like that to happen, but you can’t control everything.”

Lorenzo Carter intercepted Walker at the Carolina 28 and ran in for a touchdown that put the Falcons up 14-10 early. Carter combined with fellow starting linebackers Mykal Walker and Rashaan Evans for 13 solo tackles, two tackles for a loss and one sack.

Cornerback Dean Marlowe got burned on Moore's long touchdown catch. The Falcons need to improve their jams at the line of scrimmage to better disrupt routes.

Cornerback Cornell Armstrong limped off the field with a sore ankle, but soon returned. He led the team with a game-high three pass breakups.

14 — The combined targets for star tight end Kyle Pitts and receiver Drake London, the No. 8 overall draft pick. Though they are mostly asked to block in Atlanta’s scheme, the 14 targets were a boost from six combined the previous week in a blowout loss at Cincinnati. Pitts and London combined for nine catches, 111 yards receiving and one touchdown.

Atlanta hopes the secondary gets healed in time to face Chargers quarterback Justin Herbert on Sunday at Mercedes-Benz Stadium.