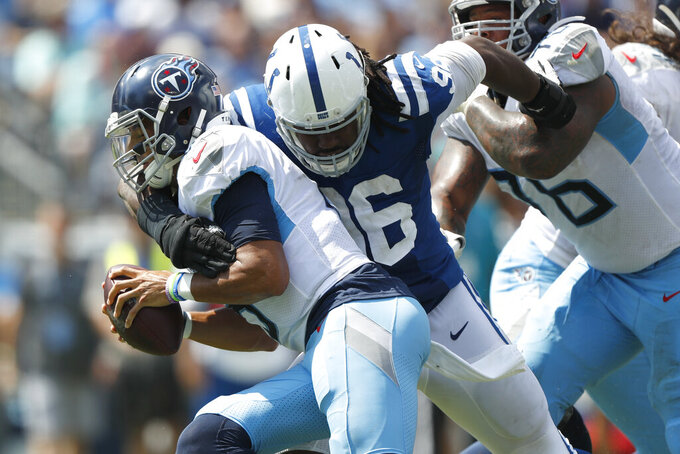 The No. 2 overall pick in 2015 may be with his fourth offensive coordinator and fifth play caller, but he too often looked indecisive. He held the ball too long in being sacked four times. He missed check-down options with receivers wide open. He got lucky a Colts defender couldn't catch an interception thrown to him.

The costliest mistakes came in the fourth quarter of a 19-17 loss to the Indianapolis Colts. Mariota was sacked early, costing 7 yards before Cairo Santos missed a 45-yard field goal wide left.

Then the quarterback being paid $20.9 million on the option of his rookie contract had the ball with 67 seconds left needing a field goal. Yet Mariota spiked the ball on third down with 15 seconds left, and he couldn't connect with rookie A.J. Brown on fourth down, sealing the loss.

"Looking back on it, should have had a different play instead of clocking it, and that's totally on me," Mariota said.

Coach Mike Vrabel said Monday that a lot of things go into negative plays on offense, which they will try to fix as quickly as possible. The Titans (1-1) visit Jacksonville on Thursday night, so Mariota and team have a quick opportunity to bounce back.

"I'm looking forward to the challenge, and we've got to get one back," Mariota said.

Pass defense. The Titans, who ranked sixth against the pass in 2018, held the Colts to 121 net passing yards for the fewest yards allowed through the air since a loss in Buffalo last season. They gave up 79 net yards passing on Oct. 7, 2018, to the Bills in another game they also lost.

The Titans have converted 3 of 20 on third downs on offense through two games; 13 have been at least 10 yards or longer.

Better production on first and second downs would give the Titans more options on third down. Yet Adam Humphries, their big free agent signee in March, has only three catches for 4 yards so far. He was signed to give them another slot option for underneath throws.

Derrick Henry. The big question about the 2015 Heisman Trophy winner was whether the running back could start this season as he finished 2018, piling up 625 yards rushing in December for the best month by anyone in the NFL last season. He's doing that, ranked sixth in the NFL for most yards from scrimmage. He's also averaging 4.9 yards per carry with 165 yards rushing.

Mariota. There's a reason the Titans haven't signed him to a new deal yet, needing to see their quarterback take control of the offense. Mariota was a perfect 6 of 6 in the second half of the Titans' opening win in Cleveland, with two TD passes in the fourth quarter. In the final 15 minutes against the Colts, Mariota was 4 of 10 for 32 yards.

RG Kevin Pamphile now has missed the first two games with an injured knee after winning the job. Center Ben Jones was added to the injury report hours before kickoff with an unspecified illness. Monday's injury report featured 11 Titans, including Mariota (quad), for a walk-through after the franchise's hottest game since 1999.

8 — How many times Mariota already has been sacked through two games after being sacked a career-worst 42 times last season. He missed three starts due to injuries.

Hello Jacksonville? The Titans have won four straight and six of their last seven against the Jaguars, who will have rookie Gardner Minshew at quarterback.