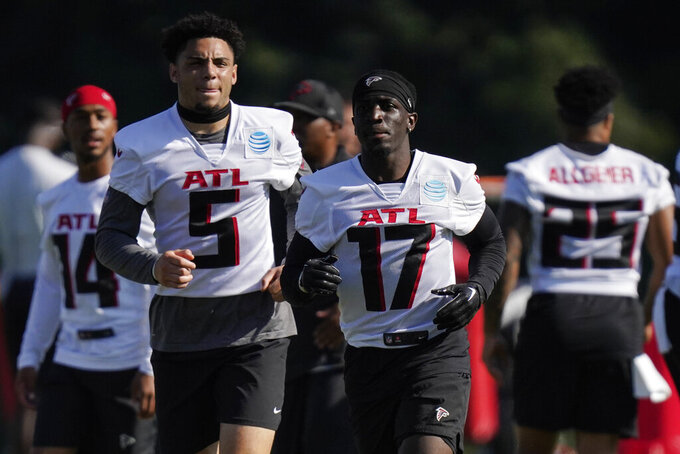 FLOWERY BRANCH, Ga. (AP) — Desmond Ridder has heard stories from NFL training camps where four or five quarterbacks line up for snaps, adding pressure to make the most of every repetition.

There's no shortage of snaps for Ridder at the Atlanta Falcons' camp. Ridder, the rookie from Cincinnati, and veteran Marcus Mariota are taking almost every snap. The only other quarterback in camp, Feleipe Franks, is spending most of his time at tight end.

Second-year coach Arthur Smith wants to give Mariota, who opened camp as the starter, and Ridder, a possible long-term option, as much time as possible.

“I mean, we’ll still give Feleipe some reps at certain points, but when you have a limited number of reps, we’re trying to make sure Marcus and Des get as many as they can,” Smith said Wednesday, adding he has a “contingency plan” at the position.

“I’m grateful for that,” Ridder said. "Sometimes you might be a little tired out here because it’s just two guys, but then you think you’re working up to this point our entire lives ... and with three, four or five guys in training camp you hear the stories that you might only get the one rep. You better make sure that rep counts.

“I’m just blessed to come in here and for right now be one of the two guys.”

Ridder made a strong early impression as a quick learner at the rookie camp and minicamp. Even so, Mariota would have to be outplayed by Ridder to lose the starting job.

The Falcons signed Mariota to an $18.75 million, two-year deal on March 21 after trading 14-year starter Matt Ryan to Indianapolis.

Mariota, 28, is motivated to take advantage of the opportunity to revive his career in his second stint with Smith, the former Tennessee Titans offensive coordinator.

Mariota, who was the Titans' top quarterback for his first four seasons, was limited to only a combined six starts the past three years with Tennessee and Las Vegas.

“I think for me, it’s a great opportunity for me to prove, not only to myself but to those who have believed in me,” Mariota said. “So I’m excited. The last couple of years was a great reset.”

Mariota has 61 career starts and the added advantage of familiarity with Smith's system, though the quarterback notes the coach has tweaked his playbook through the years.

“I feel very comfortable,” Mariota said. "Being around Art for all of that time in Tennessee, I think that’s where it comes from, but I think he’s done a great job of collaborating and creating new things. For us as an offense, it’s exciting. It allows us to just go and play fast and do creative things, but for the most part, I feel really comfortable, I feel really confident and I like where we’re at.”

“Marcus has been in coach Smith’s system before so he knows a lot more,” Ridder said. “I’m just trying to learn from him and learn how he goes about the game plan and learn how we go about things each and every week just so I can better myself and be the best I can be.”

NOTES: The Falcons signed S Henry Black, who was released by the New York Giants on Tuesday, to a one-year deal. Black played for Green Bay in 2020-21. TE Brayden Lenius was released. ... Todd McClure, the center who played his full 14-year career with Atlanta, has been selected to the Falcons Ring of Honor. McClure, who retired after the 2012 season, set by a franchise record by starting 144 consecutive games from 2001-10. He will become the 12th player inducted into the Ring of Honor at halftime of the Falcons' game against Carolina on Oct. 30. Other Atlanta players to be honored: Tommy Nobis, Claude Humphrey, Jeff Van Note, Steve Bartkowski, Mike Kenn, William Andrews, Gerald Riggs, Jessie Tuggle, Deion Sanders, Warrick Dunn and Roddy White.