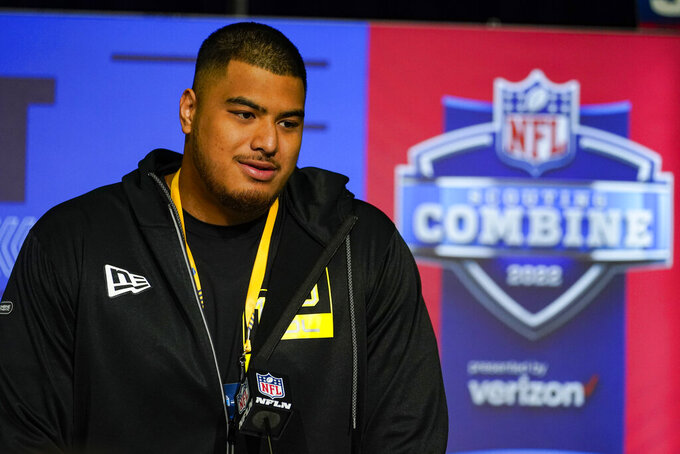 INDIANAPOLIS (AP) — All-Big Ten offensive tackle Blaise Andries never felt so small than the day in 2018 that Daniel Faalele ducked into the University of Minnesota locker room for the first time.

Packing 426 pounds on his 6-foot-8 frame, Faalele towered over everybody.

What really dropped Andries' jaw was watching this massive recruit bend and shuffle at practice as well as any of the other offensive linemen. He'd only picked up the sport a year earlier after spending his youth in Australia playing rugby and basketball in Melbourne.

“The first week of workouts I was like somebody that big is not supposed to move so well,” Andries recounted Thursday at the NFL scouting combine where Faalele — now checking in at a relatively svelte 385 pounds — was quite the spectacle on Podium 5 at the Indianapolis Convention Center.

“He's very athletic, as athletic as I am,” said Andries, who was inspired to double down on own training just to keep up with his gargantuan new teammate.

Imitation paid off for Andries, who started all 46 games he played at Minnesota, five at left tackle, 11 at left guard, 21 at right guard and nine at right tackle.

Faalele started 31 of 34 games — he opted out in 2020 because of the pandemic — and all his starts were at right tackle.

Now, they're both NFL draft prospects. Andries has the NFL frame and flexibility but he doesn't generate as much push as a drive blocker as Faalele, who is still trying to make up for his late start in football and plays more mechanically than instinctively.

Faalele moved to Brandenton, Florida, when he was a junior in high school and practiced and watched that first football season at IGM Academy before starting as a senior.

Faalele loved playing rugby and hoops but he took a shine to football right away after college coaches from Hawaii and Michigan steered him to the gridiron.

“Being able to dominate somebody — legally — is something that's definitely fun,” Faalele said. “Always love getting pancakes and making someone's day worse.”

While he can certainly overwhelm opponents with his enormous size and 35-inch arms, his massive size can also be a detriment in creating leverage limitations.

Faalele said his best attributes are his athleticism for his size and “just how strong I am. Being a bigger body, I have longer arms. So, just using those intangibles to my advantage.”

“The biggest challenge is always pad level. I can always get lower.”

That’s what coaches told him at the Senior Bowl.

“The main thing they were talking about is pad level, and just taking better angles to the second level.”

Scouts say Faalele might have enormous upside because he's still so raw.

“I feel like the sky’s the limit for me," Faalele suggested. "I just need more coaching and I feel like going to the next level I’m excited to see how far I can go.”

Faalele said he studies Orlando Brown's moves because of his similar size and he counts as his inspiration Jordan Mailata, a former professional rugby player and Australian native of Samoan heritage who was selected by the Eagles in 2018 despite having no prior football experience.

“Seeing Jordan Mailata and what he's done in the league is definitely inspiring, kind of a similar story," Faalele said.

“It was cool. It's like I've known him forever,” Faalele said. “He gave me his number, just a great friend and mentor.”

So, what's the biggest thing Faalele will bring to the NFL besides his massive size?

“The biggest thing is how powerful I am and how athletic I am for my size,” he said.

Faalele said he's lost weight every year since enrolling at Minnesota at 426 pounds and that has helped his cardiovascular conditioning and aided him in honing his skills. He'd like to get down to 375 by training camp, and as his body shrinks he figures his game will only balloon.

“I feel like I definitely have a lot to show and I have room to grow," Faalele said. “I feel like that's the exciting thing about me. I have a lot more potential to reach.”