Mathieu thanks Saints for support during absence from camp 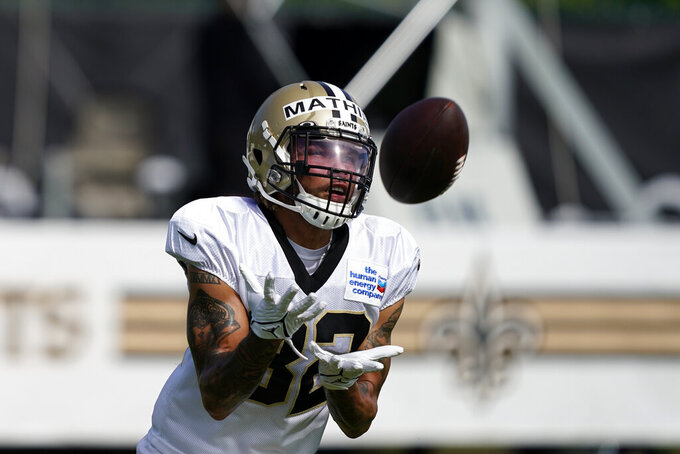 The important thing, he said Thursday, was that he's back with the team and feeling good about it.

“I’m sure at some point I’ll be more transparent about the first six days of practice,” Mathieu said after his second practice since reporting for training camp earlier this week.

“But just more important, I’m happy to be back around the guys. I’m feeling good. I’m in great spirits, really healthy. So everything that’s important is going good.”

The 30-year-old, nine-year NFL veteran agreed to a three-year, $33 million free-agent contract with the Saints in early May. But shortly before camp opened last week, the club announced that Mathieu had been excused for a personal matter.

“It’s a little out of the norm for me. I’m usually one of those guys that never really misses a practice or anything like that," Mathieu said. “At the end of the day it’s a long season.”

Asserting that he sees the Saints as a club with realistic postseason aspirations, he said there's time for him "to be where I need to be when the time is right.”

While Mathieu was reluctant to go into detail about what was troubling him, he praised both his teammates and the Saints as an organization for standing by him.

“A lot of times, especially with strong people, we kind of just let those people go through life and we never really show that support and we don’t consider that," Mathieu said. "So, I think having the team support, having the coaches' support — I think I’m a strong man, for the most part — but it allowed me to just embrace it, embrace that moment and embrace that support.”

The offseason addition of Mathieu to the Saints' secondary was met with much fanfare in New Orleans, where Mathieu grew up and played in high school before starring in college at LSU.

Mathieu was raised by his grandparents in New Orleans, then became a star football player and track athlete for St. Augustine High School, and he maintained deep ties to the city that brought him up, enhanced through his charitable endeavors and football camps in the area.

He also still has deep ties to LSU, where a players lounge at the football building is named for him.

Mathieu's tenacious play during two seasons at LSU earned him the nickname “Honey Badger." As a sophomore in 2011, he was a Heisman Trophy finalist and won the Bednarik Award as the nation’s top defensive player. But his college career was cut short when then-Tigers coach Les Miles dismissed Mathieu in the summer of 2012 for repeated drug test failures.

Matheiu spent time in a Houston rehabilitation program, but it wasn’t until he was drafted by Arizona in the third round in 2013 that he put his life together. Mathieu became a dependable defensive standout for coach Bruce Arians and has since added two All-Pro nods with Kansas City to go with one earned in Arizona. He also has been selected to the Pro Bowl each of the past three seasons.

Mathieu said a number of his Saints teammates have "followed my career a long time. They’ve seen a lot of ups and downs throughout my career.

“A lot of those guys want the best for me," Mathieu said. "They want me in a great space. They want me healthy. They want my family doing well. Because, at the end of the day, all of those things kind of benefit us.”