Mayfield adapting to backup role, doesn't want to be traded 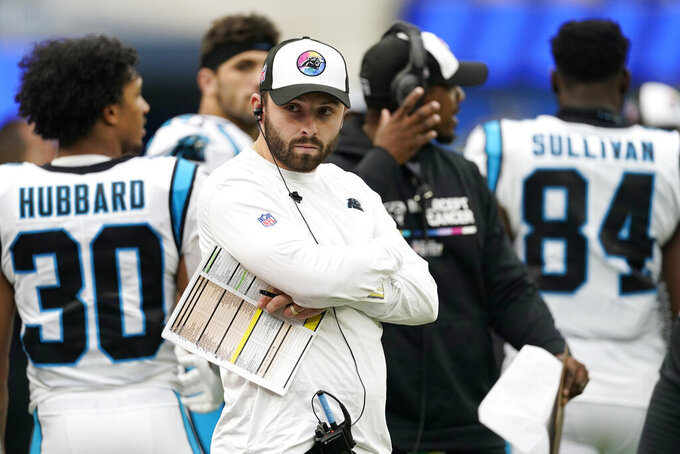 Injured Carolina Panthers quarterback Baker Mayfield watches from the sideline during the second half of an NFL football game against the Los Angeles Rams Sunday, Oct. 16, 2022, in Inglewood, Calif. (AP Photo/Ashley Landis)

CHARLOTTE, N.C. (AP) — While things haven’t exactly gone well this season for Baker Mayfield, that doesn’t mean the 2018 No. 1 overall pick wants out of Carolina.

“I want to be here,” Mayfield said Thursday when asked if he wants to be traded from the Panthers.

Mayfield is in unfamiliar territory this Sunday, playing backup to starter P.J. Walker against the Atlanta Falcons. It’s the first time since Week 3 of his rookie season with the Cleveland Browns that Mayfield will enter a game as the No. 2 QB.

Mayfield said he understands interim coach Steve Wilks’ decision to start the unheralded Walker this week. Walker threw for 177 yards and two touchdowns last Sunday, leading the Panthers to a 21-3 upset over the Tampa Bay Buccaneers.

It was by far the most productive outing by a Panthers quarterback this year.

"P.J. is playing his (butt) off and deserves to go out there and play,” Mayfield said.

Mayfield began the season as Carolina's starter and struggled to find a rhythm, going 1-4, completing just 54.9% of his passes with four touchdowns and four interceptions. He struggled with batted balls at the line of scrimmage before sustaining a high ankle sprain in Week 5 against San Francisco and has missed the past two games.

Walker took over and struggled in his first outing against the Los Angeles Rams before rebounding in a big way against the Bucs.

With the Panthers (2-5) suddenly just one game out of first place in the NFC South — and undefeated in the division at 2-0 — Wilks is sticking with the hot hand.

“It’s not my plan,” Mayfield said. "I’m a competitor, but I’m rolling with the punches and helping this team out in any way I can. I came here to win. If my role is to help P.J. out from the sideline and help the defense out by running the scout team, I’m going to do it.”

Mayfield said he has a tremendous amount of respect for Walker.

“For him to be able to stay ready and play the way he did last week was just unbelievable, so I am very happy for him,” Mayfield said.

At least on paper, Mayfield has a very tradeable contract as the Panthers are paying him just $4.8 million this season following a preseason trade with the Browns. If another team trades for Mayfield this week, they would assume the remainder of his base salary and would owe him $2.96 million for the remainder of the year.

The NFL trade deadline is Nov. 1 and with Sam Darnold coming back from an injury soon, it would behoove the Panthers to explore options.

But Mayfield has played poorly this season and there might not be a market for him unless injuries pop up around the league.

When asked if he's spoken to general manager Scott Fitterer about a trade, Mayfield said “No, I mean it was more so a concern of just making sure we are playing for wins. That's what I came here to do. And we are. Obviously that showed on Sunday."

Mayfield called this an “instrumental year” since he's set to become an unrestricted free agent after the season.

At this point it's unlikely the Panthers would try to re-sign him unless he's able to get back on the field and prove that he can be more productive.

But as for right now it's Walker's show.

So Mayfield is set to ride out the season.

“There are no guarantees that I will be here so I am trying to handle it as well as I can, whatever role that is just do it the best I can,” Mayfield said.

“He comes in ready to work every day and gets the reps in with us on the side,” Moore. “To go from (being the starter) is probably tough, but at the same time we know it’s a business and we know what we signed up for at the end of the day. I know he wishes he was the starter, but he’s the backup right now so I know he will motivate P.J. in the best way he can.”

Mayfield likes what he's seen from his teammates, calling this a resilient group that beat Tampa Bay after head coach Matt Rhule was fired and Christian McCaffrey and Robbie Anderson were traded.

“There were pretty big clouds in the first part of the season and I think guys are seeing where this team could possibly be," Mayfield said.

"Coach Wilks has done nothing short of a fantastic job and has this group playing with its hair on fire and passionate and believing in themselves — and that is a great quality about him,” he added.