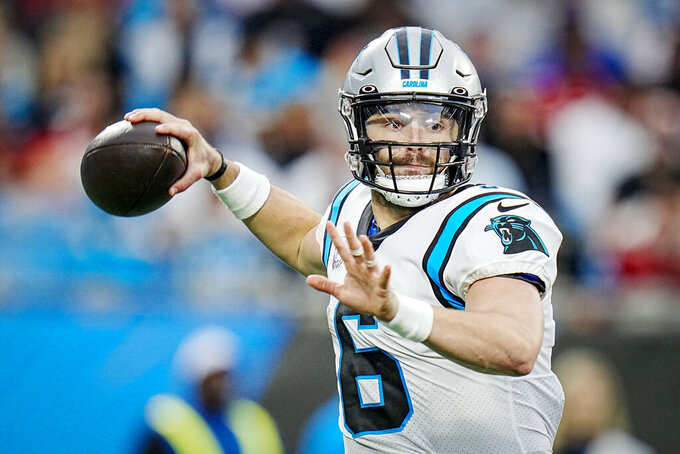 FILE - Carolina Panthers quarterback Baker Mayfield looks to pass during an NFL football game against the San Francisco 49ers, Oct. 9, 2022, in Charlotte, N.C. Mayfield has said he does not want to be traded and is trying his best to be supportive as the team's No. 2 quarterback behind starting P.J. Walker. (AP Photo/Rusty Jones, File)

CHARLOTTE, N.C. (AP) — Baker Mayfield isn’t sure how things will shake out when Sam Darnold’s 21-day window to return from injured reserve closes on Tuesday.

The Carolina Panthers will then have to make a difficult decision on what to do at quarterback.

With P.J. Walker making his fourth straight start on Sunday at Cincinnati and seemingly holding down the starting spot with the offense improving, it’s unclear if the Panthers will keep three QBs on the roster or waive Mayfield or Darnold.

“I think that has kind of been the looming question, but that is not for us to handle," Mayfield said. "We are just worried about one day at a time and I think that is just how the QB room has been — and how it has been handled. We will see when that time comes to be honest with you. I don’t have the right answer.”

Panthers interim head coach Steve Wilks said earlier in the week that he didn't want to discuss hypotheticals when asked about the impending decision on Darnold and how it impacts the quarterback room.

“So I’m going to wait and see exactly what happens at that time and my decision will be the best decision for this team," Wilks said.

Mayfield struggled in his first five starts this season, going 1-4 with four interceptions and four TD passes. He lost his starting job after injuring his ankle in a Week 5 loss to San Francisco, but is healthy now.

Mayfield said his goal now is to be the best teammate he can be.

He couldn't contain his excitement when Walker completed a 62-yard desperation pass to D.J. Moore that tied the game at 34-34 with 12 seconds remaining last Sunday at Atlanta.

He raced onto the field to congratulate the starting QB.

“Well, hell yeah," Mayfield said. "I mean have you seen a throw like that? Because I haven’t. I mean he let that thing go. ... That is heck of a play at a crucial moment when not a lot of people gave him a chance.”

Mayfield said the Panthers have a tight quarterback room and everyone has been supportive of each other.

He doesn't expect that to change.

The No. 1 overall pick in the 2018 draft admits that being a backup quarterback wasn't what he envisioned when he threw for 3,653 yards and 26 touchdowns in 2020 and led the Cleveland Browns to an 11-5 record and a playoff victory over the Pittsburgh Steelers.

“No, but that’s the way of this league," Mayfield said. “There are ups and downs. You hit adversity and you hit the crossroads, but it’s how you handle it. How you handle it speaks volumes about your character and what you’re trying to do.”

“I have always been about winning and I truly mean that,” he added.