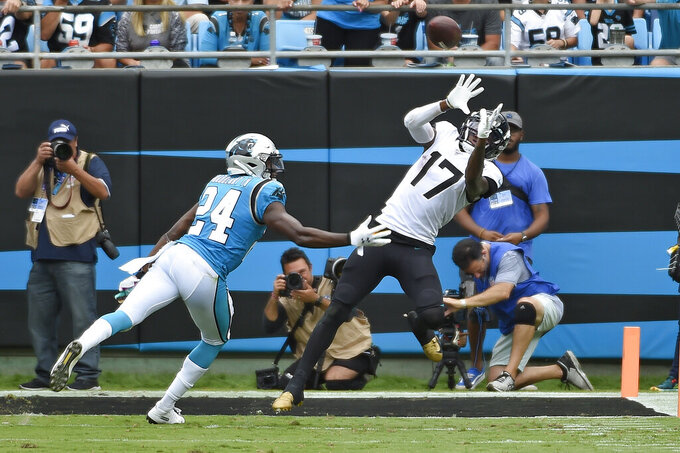 They did just that on Sunday, finding a running play they liked and exploiting it time and time again.

Using a single-back, inside zone run the Panthers piled up 285 yards rushing and three touchdowns on the ground, and held on to defeat the Jacksonville Jaguars 34-27 on Sunday for their third straight win and first victory at home in nearly a year.

Christian McCaffrey led the way, scoring three touchdowns and piling up 237 yards from scrimmage — including 176 yards on the ground — before exiting with five minutes remaining due to leg cramps. Any concerns over the NFL's leading rusher's exit were quelled when his seldom-used backup Reggie Bonnafon entered and added a 59-yard touchdown scamper for the game's final score with 3:34 left.

Bonnafon's TD came on the same inside run play the Panthers called earlier in the game resulting in a franchise-record 84-yard touchdown run by McCaffrey — and one they used several occasions.

"If it's not broke, don't fix it," McCaffrey said with a smile.

Said Jaguars linebacker Myles Jack: "They had a phenomenal day, but it was just people not being in their gaps. You're seeing them hitting wide-open holes, and it's not like they're running us over, stiff-arming guys and breaking ankles."

McCaffrey did go airborne on one 5-yard touchdown run, somersaulting into the end zone on a highlight reel first-half score. And he also juked out several defenders to pick up first downs. He averaged 9.3 yards per carry and caught six passes for 61 yards and an 18-yard touchdown in another dominating performance for the early MVP candidate.

It's the fourth time this season McCaffrey had at least 175 yards from scrimmage and at least one touchdown in the first five games, tying a record set by Jim Brown in 1963.

McCaffrey's latest big day put the third-year running back on pace for 2,771 yards from scrimmage, which would shatter the NFL single-season record of 2,509 yards set by Tennessee's Chris Johnson in 2009.

"You keep pulling from that thesaurus," said Rivera, who passed John Fox for the most coaching wins in franchise history with 74. "There's a whole bunch of words you can use to describe the way he plays and the amount of energy he plays with. ... He just plays the game with so much passion."

Even with Carolina's exploits on the ground, the Panthers still needed two late stops from their defense and a 56-yard fumble return for a touchdown from rookie defensive end Brian Burns to beat the Jaguars on a day when kicker Joey Slye missed two field goals and an extra point.

Kyle Allen managed to avoid the turnover bug and became the first undrafted quarterback to win his first four career NFL starts since Kurt Warner. Allen did fumble on the game's opening possession, but it was waived off by a penalty.

"It's almost become a tradition at this point," Allen joked of his third straight fumble on the game's opening drive. "I'm continuing to work on it."

Burns, who was NFC defensive rookie of the month for September, had another big game.

Burns' TD came on the result of Mario Addison pushing former teammate guard Andrew Norwell into Minshew, prompting the ball to come out and bounce into Burns' hands. Burns reached a speed of 19.90 mph on the return the second-fastest speed by a defensive linemen this season according to Next Gen Stats.

Jaguars defensive end Yannick Ngakoue came in with no sacks this season but had two Sunday against the Panthers, including a strip-sack on Allen later in the game that the Panthers recovered. Ngakoue had 29 sacks over the past three seasons for Jacksonville.

Panthers middle linebacker Luke Kuechly continued his march toward the Hall of Fame, becoming the fastest player to reach 1,000 career tackles. Kuechly said the honor is the result of playing for good coaches and having great defensive linemen in front of him.

"It's an individual thing but I think a lot of credit goes to everyone else who has made it possible," Kuechly said.

Smith received the biggest ovation and during his speech said he never thought he'd wear a Panthers jersey again. Then he paused and ripped off his ceremonial Panthers blue jacket to reveal his No. 89 jersey underneath as the crowd cheered. Smith then turned to Panthers owner David Tepper and said, "Make sure nobody wears that jersey again."

Delhomme called the honor the greatest sporting day of his life.

Jaguars: TE James O'Shaughnessy left in the third quarter with a knee injury and did not return.

Panthers: LB Christian Miller and gunner Natrell Jameson left with ankle injuries and did not return.