McCarthy back at Lambeau as Cowboys visit desperate Packers 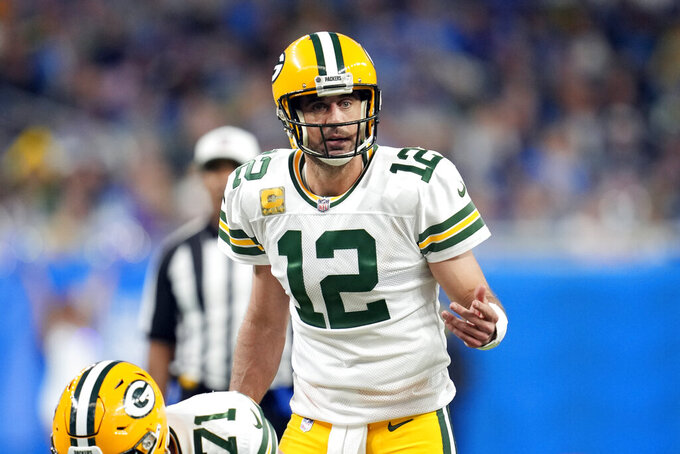 Green Bay Packers quarterback Aaron Rodgers (12) calls a play during the second half of an NFL football game against the Detroit Lions, Sunday, Nov. 6, 2022, in Detroit. (AP Photo/Paul Sancya)

This initially shaped up as a midseason matchup between two teams with high expectations after reaching the playoffs a year earlier. While the Cowboys (6-2) have held up their end of the bargain, the Packers (3-6) have dropped five straight games for the first time since 2008.

The Packers are dealing with multiple injuries as they attempt to spoil McCarthy’s return on Sunday and boost their fading postseason hopes.

“Nobody really cares about what you’re going through, what the circumstances are,” said McCarthy's successor, Matt LaFleur. “You’re expected to win, especially here. We know we’re going against a great opponent — one of the best teams in the National Football League.”

McCarthy took over as Green Bay's coach in 2005 and posted a 125-77-2 record before getting fired late in the 2018 season. He led the Packers to their most recent Super Bowl title, in the 2010 season. A road near Lambeau Field is named Mike McCarthy Way.

The coach got emotional this week while discussing his favorite memories from Green Bay. He noted how special this game will be for his family.

But he also wants to make sure none of those factors affect his team’s focus.

“Trust me, I’m the last person that wants to create any type of distraction or questions for somebody else because we’re at the point in the year now, starting the third quarter of the season, we know what it takes to win a football game,” McCarthy said.

Packers quarterback Aaron Rodgers, who earned two of his four MVP awards while playing for McCarthy, says he appreciates the way his former coach has shown his sentimental side in the days leading up to this matchup.

“Mike’s Pittsburgh toughness and grit on the outside and a big soft teddy bear on the inside,” Rodgers said. “I think that’s a great combination to have.”

Outside linebacker Rashan Gary, who has a team-high six sacks, suffered a season-ending knee injury Sunday in a 15-9 loss at Detroit. He’s one of many Packers who could be unavailable against the Cowboys.

NO RUSH FOR ELLIOTT?

Dallas running back Ezekiel Elliott sounded less than certain he would play after missing the game before the bye with a right knee injury. The two-time rushing champ is listed as questionable. If he does play, it likely will be with a brace.

Elliott missed just one game because of injury in his first six seasons. He played through a knee injury last year, limiting his effectiveness. Even before the latest injury, he was sharing the backfield more than at any point in his career.

With Elliott out against the Bears, Tony Pollard matched his career highs in carries (14) and yards rushing (131) with a 54-yard touchdown in Dallas’ 49-29 victory.

“I would say there is urgency,” Elliott said. “But I think what’s important is just making sure my knee is good and ready to go. I plan to play deep into the playoffs, so the long game is definitely the priority.”

FROM BRADY TO RODGERS

Young pass-rushing star Micah Parsons faced Tom Brady in his first game as a rookie for the Cowboys last year, and again in the opener this season. Now he gets a shot at a four-time MVP in Rodgers.

“He’s an idol and a figure in this league that you look up to,” said Parsons, who entered the week fifth in the NFL with eight sacks. “I look up to him. He’s been in this league a long time and done it the right way. He’s a hell of a player and no one can take that from him.”

Green Bay is scoring just 17.1 points per game to rank 27th in the NFL as the Packers struggle without departed two-time All-Pro receiver Davante Adams. Rodgers and Adams had a knack for improvising to get big gains.

Rodgers was asked Wednesday if perhaps he shouldn’t go off script as often now that his receivers haven’t worked with him as often as Adams. Rodgers replied, “I think we’ve been more by the book in this year than we have been in any year that Matt’s been here.”

“I think the struggle has been how do we make it by the book but not robotic,” Rodgers said. “Because robotic, unless you have a perfect scheme that’s paired up with a perfect defense for that scheme, it’s not going to be open. So I think that’s where the little details come in, where we’re not trying to be robotic. Obviously, we’re trying to run the plays by the book. We’re not going way outside the offense.”