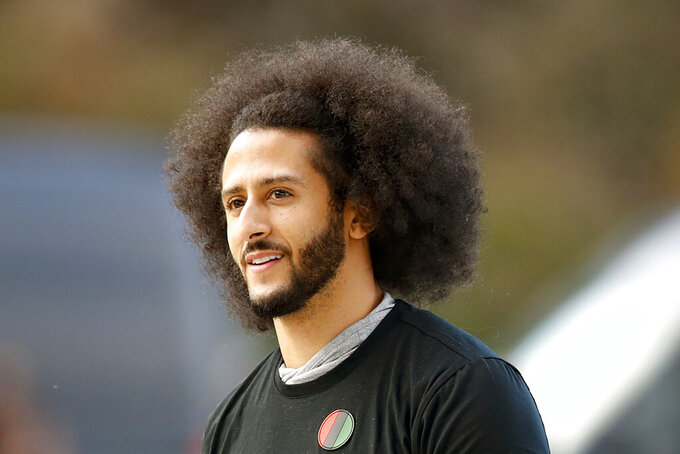 FILE - In this Nov. 16, 2019, file photo, free agent quarterback Colin Kaepernick arrives for a workout for NFL football scouts and media in Riverdale, Ga. Kaepernick is getting his first chance to work out for an NFL team since last playing in the league in 2016 when he started kneeling during the national anthem to protest police brutality and racial inequality. Two people familiar with the situation said on Wednesday, May 25, 2022, that Kaepernick will work out for the Las Vegas Raiders. (AP Photo/Todd Kirkland, File)

LAS VEGAS (AP) — The Las Vegas Raiders concluded organized team practices Thursday with all four quarterbacks on the roster participating but the buzz surrounding the franchise was about Colin Kaepernick, who has gotten a workout with the club.

First-year coach Josh McDaniels wasn't entertaining any conversation about Kaepernick’s potential future with the team, however.

“Just by a standard procedure, we will only talk about the people on our team,” McDaniels said. "Dave (Ziegler, general manager) and his staff have worked out tons of guys this spring, and we really don’t make comments about the evaluations that we made or what they looked like, what they didn’t look like, strengths and weaknesses, those kind of things.

"They’re kind of private obviously for us as we look at things to try to make decisions to make the team better."

Kaepernick got his first chance to work out for an NFL team Wednesday since last playing in the league in 2016, when he started kneeling during the national anthem to protest police brutality and racial inequality.

McDaniels said there will be “a lot of people that are going to come in and out of” the facility with an opportunity to make an impression, and each evaluation will remain private.

Kaepernick hasn’t played since the end of the 2016 season when he was cut by San Francisco when the new regime led by coach Kyle Shanahan wanted to go in a different direction at quarterback.

Until this week, he never got another opportunity to even to work out for NFL teams as he alleged he had been blackballed over his protests. He met with Seattle and had informal talks with Baltimore but never got a closer look.

Kaepernick filed a grievance with the NFL in 2017 over his lack of opportunity and settled it in 2019 — but still never got another look.

The Raiders don’t have a glaring need at quarterback. They signed starter Derek Carr to an extension last month and added Nick Mullens as a backup this offseason. They also traded for Jarrett Stidham and signed Chase Garbers as an undrafted free agent.

“People say you’ve got an established (veteran quarterback). We certainly do," McDaniels said. "The next guy in line, you don’t really talk about him until he’s the most important guy in your organization when the starter gets hurt. It’s one of the toughest positions, if not the toughest position, to play in all of sports. To try to constantly shuffle through and make sure that you’re doing the best you can to provide competition in that room, and to have guys in there that can learn and play and produce in your system with the group that we have is really an important part of any football team.”

Mullens, Stidham and Garbers will all compete for the No. 2 slot behind Carr, who ranked fifth in the league with 4,804 yards passing last season. All four rotated between stations, working out with specific offensive units during Thursday’s two-hour session.

“Each day is an opportunity for them to grow,” McDaniels said. “We’re encouraging the competition right now.”

The same can be said for an offensive line that was rated 28th in Pro Football Focus’ final unit rankings.

“Young guys are trying to absorb as much as they can and our job as old guys, we’re trying to show them the ropes,” tackle Kolton Miller said ”Everything’s a lot different now so they’re getting adjusted and they’re doing great.”

McDaniels said his staff couldn’t ask for much more than it has gotten thus far.

"They’re learning a new language, quite honestly, in each phase of the game,” McDaniels said. “Whenever that’s the case the first thing you have to do is really start to understand the verbiage. ... The attention, the effort, the attitude we have is tremendous. A long way to go before we can really say ‘we got it, we understand everything’ but after three days of this I’m pleased with kind of where we’re headed.”

Eight-year veteran linebacker Denzel Perryman was brought in last season mainly because of his familiarity with then-defensive coordinator Gus Bradley, whom he played for during his time with the Chargers. After being a mentor to the younger players last season, Perryman said everyone is on a level playing field learning first-year defensive coordinator Patrick Graham’s system.

“Everything’s just different, but it’s a good different,” said Perryman, who led the team with 154 tackles last season. “It’s a brand new start for everybody. At the same time I’m helping guys out ... I’m trying to make the 53 as well.”