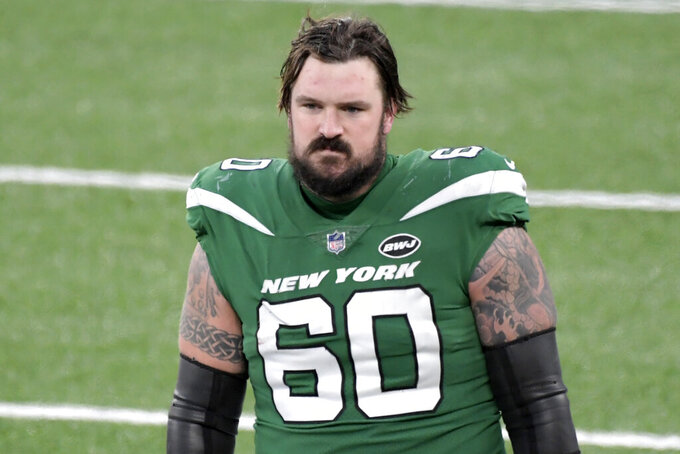 FILE - In this Dec. 6, 2020, file photo, New York Jets center Connor McGovern walks off the field after the Las Vegas Raiders defeated the Jets in an NFL football game in East Rutherford, N.J. McGovern is not used to losing. He cannot stand it. This dismal season with the Jets has taken things to another level. (AP Photo/Bill Kostroun, File)

NEW YORK (AP) — Connor McGovern isn't used to losing. He can't stand it. This dismal season with the New York Jets has taken things to another level.

The veteran center describes himself as “extremely competitive,” the product of a family that can't even play card games together because things get too intense. That's why 0-13 is difficult to deal with — especially when some fans are rooting for a winless season to secure the No. 1 overall draft pick in April.

“It's just not in my nature to lose,” McGovern said Friday. “If you’re going to be good at football and play at an elite level, you're never playing to lose. So, I mean, it might be easy for somebody sitting on the couch eating pizza, chips and dip to say they should keep losing. But if they’ve ever strapped the pads on, that sounds like an impossible thing for me to do.

The choruses of “Tank For Trevor!” have gotten louder over the last several weeks, with many Jets fans having visions of Clemson star quarterback Trevor Lawrence playing for them next season.

The current players and coaches are still focused on the present, though. And that means trying to win this week. And every other week. That's where the disconnect lies between players and some fans — where they're hoping for opposite results.

“You've got to love it to be great at this game. And you’re not going to love it if you’re trying to lose.”

McGovern's comments echoed those of Philadelphia center Jason Kelce, who earlier this week talked about how winning should always be a franchise's priority over developing young players or trying to set up the team's future now by “tanking.”

But the Jets, whose 13-game losing streak is the longest in team history, are having a difficult time just winning one game. They also appear on track — with games at the Los Angeles Rams, home vs. Cleveland and at New England — to join the 2008 Detroit Lions and the 2017 Browns as the only NFL teams to go 0-16.

The 27-year-old McGovern spent his first four NFL seasons in Denver, where the Broncos didn't do a lot of winning during his time there, either. They were 27-37 and McGovern signed a three-year, $27 million contract with New York last April.

He has since become the most reliable part of the Jets' revamped and seemingly ever-changing offensive line. New York has used eight combinations of linemen this season, but the constant has been McGovern.

“He’s done a good job, very knowledgeable as far as just football in general,” coach Adam Gase said. “He really thinks things through, he does a great job of communicating with the rest of the line, with the quarterback. His preparation is outstanding. I’ve been really impressed with that.”

McGovern is the only player on offense to start all 13 games, playing 97.47% of the offensive snaps. Linebacker Neville Hewitt and safety Marcus Maye are the only other players start every game.

McGovern smiled and knocked on the wooden lectern when a reporter mentioned his durability.

“I take a lot of pride in it,” McGovern said. “It’s kind of something that I’ve taken extreme pride in my whole career, whether it was high school, college or the NFL.”

Not that McGovern hasn't been banged up a bunch during his career. It's just the approach he takes, like most other offensive lineman.

“You’ve got to be a tough dude to play in the trenches,” he said. “It’s 65 to 80 fights in a game. And that’s what your mindset is. So a little nick here or there, whatever it is, I was always told there’s a difference between being hurt and injured. As long as you’re hurt, you can keep playing offense line.

"So that’s kind of the mentality I've always taken with me.”

NOTES: WR Jamison Crowder (calf) is questionable to play Sunday. He was limited Friday for the second straight practice. No one else was listed with an injury designation. ... Gase said DL Folorunso Fatukasi, on the reserve/COVID-19 list, did not violate any rules when he was deemed a close contact of someone outside the organization who tested positive with the coronavirus. No other defensive linemen or coaches were considered at risk.