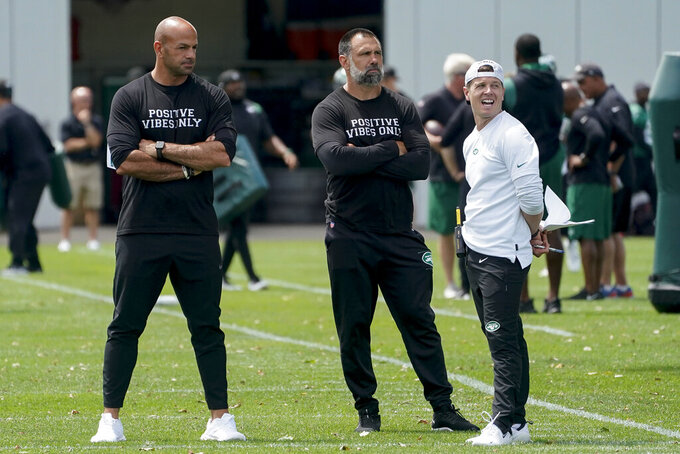 Becton missed almost all of his second NFL season after dislocating his right kneecap and spraining his MCL in the opening game against Carolina in September.

The No. 11 overall pick in 2020 has been working out on his own in the Dallas area while staying in touch with the team. Becton's fiancée also recently gave birth to the couple's first child.

Coach Robert Saleh said last week he expected all of the team’s players to be present for the mandatory minicamp, so Becton’s attendance was not a surprise.

“Man it feels great to be back with my brothers,” Becton wrote on Twitter after practice. “But damn do i miss my family.”

Offensive coordinator Mike LaFleur said Becton “looks good,” but added the 6-foot-7, 363-pound lineman will work with the Jets' trainers during the team's minicamp practice sessions Tuesday and Wednesday. He exercised and did some light running off to the side without a brace or sleeve on the knee — a positive sign.

“It was good to see him and I know he’s going through his process,” LaFleur said.

Because it was the first time Becton has been at the facility in a few months, he left, well, a big first impression on some of his new teammates.

“I didn’t realize how big he was in person,” said running back Breece Hall, a second-round pick in April. "He’s a big guy. I’m excited to run behind him.”

After Becton was injured last season against the Panthers, George Fant slid over from right tackle to Becton's left tackle spot and performed well. The Jets anticipate the two competing for the left tackle job during training camp — with the other likely playing right tackle.

Fant is also recovering from offseason knee surgery, but is expected to be fully recovered in time for training camp in late July. He and Becton were among a group of players, including defensive end Carl Lawson and tight end C.J. Uzomah, working in the trainers area at the start of practice.

Becton has played only left tackle in the NFL, but his athleticism and size have led the Jets to believe he can succeed at either spot.

“He’s a very large man that’s hard to run around in the pass game and then, for being such a big man, he’s got a great first step to get on players and move them in the run game,” LaFleur said. “Our scheme or any other scheme, he’s got the talent. ... The thing for Mekhi is for him just putting himself in the best situation for him going forward.”

Rookie cornerback Ahmad “Sauce” Gardner has worn No. 1 since high school and paid big bucks to continue that tradition in the NFL.

Gardner made a deal for $50,000 with fellow cornerback D.J. Reed to get the No. 1 jersey — which Reed chose to wear with the Jets after he signed as a free agent in March.

“I saw some tweets where someone said like $250 (thousand)," Gardner said. "It (was) nowhere near that.”

Reed, who wore No. 2 last season with Seattle, is now wearing No. 4 — Gardner's assigned jersey number after he was drafted as the fourth overall pick in April out of Cincinnati.

Denzel Mims heads into his third season with an uncertain role, but appears to have put the struggles from last season behind him.

LaFleur raved about the wide receiver, who had just eight catches for 133 yards in 11 games last season following an offseason bout with food poisoning, a tough recovery from COVID-19 during the season and some nagging injuries.

Mims, a second-rounder in 2020, has just 31 career catches in 20 games with no touchdowns. He's behind Corey Davis, Elijah Moore, rookie Garrett Wilson, Braxton Berrios and perhaps even Jeff Smith on the depth chart. But LaFleur sees a difference in Mims off the field.

“I love the energy he’s approached with every single day in the meeting rooms,” LaFleur said. “He’s much more confident in the offense to the point that we can be in the meeting rooms and he’s going to speak up, give his answers, and stuff like that. It’s been cool. He’s putting himself in the best situation for himself to be as successful as he can.”