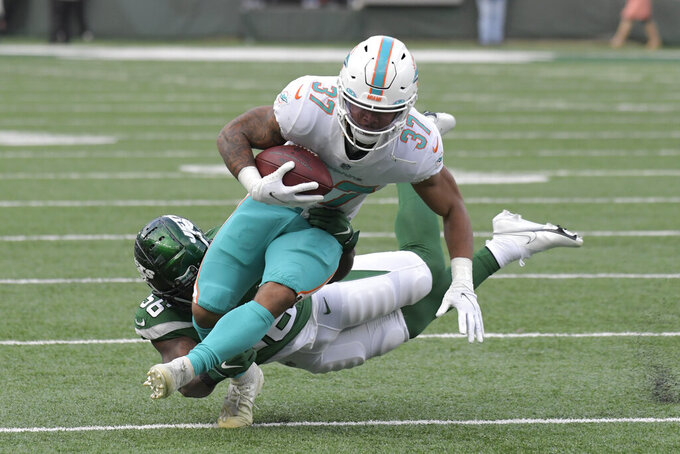 The Dolphins might not be able to count on repeat performances this weekend.

Waddle and Gaskin — Miami’s leading receiver and leading rusher, respectively — were among a handful of Dolphins on the league’s COVID-19 reserve list this week. Gaskin was cleared to return to practice Friday, though it remains unknown how many players Miami (6-7) will have to go without when it puts its five-game winning streak on the line Sunday against the Jets (3-10).

Miami already had three running backs, including Gaskin, plus rookie safety Jevon Holland on the COVID-19 list when the news came Thursday that Waddle was being added to that group. Gaskin has 61% of Miami’s carries and 62% of the Dolphins’ rushing yards during the five-game win streak; Waddle has more catches than any other two Miami receivers combined over that span.

Holland was removed from the list and activated Saturday, in time to be eligible to play Sunday. Waddle was not.

“Same old, same old. The guys who are next up, they need to understand that their number might be called and they need to be ready to help this team win,” Dolphins offensive lineman Michael Deiter said. “Everyone involved needs to be ready to be the next guy up ... because obviously it’s real. COVID is real."

The Dolphins had practices and walk-throughs as usual, but transitioned midway through the week to meetings being done virtually instead of in-person. The Jets had been in that mode all week, obviously cognizant of rising virus numbers.

Both sides said they were trying to keep the focus on football. Miami — a team that was 1-7 at the trade deadline — still has some playoff hopes. The Jets are out of the playoff picture, but any game in this series is always considered a rivalry renewal.

“You can see that they have kind of shifted at least from an offensive standpoint with their identity,” Jets coach Robert Saleh said of the Dolphins and their winning streak.

“Defensively, they’ve been playing lights-out and credit to them. They’ve just really settled down with what their core system is. It seems like they’ve really simplified it, but kept it complex all at the same time.”

The simplification is mandated from the top in Miami. Ask Dolphins coach Brian Flores a question about the future, and his answer will always be some version of him saying that he’s simply focused on whatever the tasks are on that day, the next practice, the next opponent.

“We’re playing the Jets and we’re trying to just win one game. That’s it,” Flores said.

Waddle is up to 86 catches, already a Miami rookie record, and is 15 shy of the NFL rookie mark of 101 set by Anquan Boldin in 2003. If he misses one game, he will remain on pace to pass Boldin for the rookie record.

Waddle also has 849 yards this season, 34 away from Chris Chambers’ Dolphins rookie mark in that category.

Jets quarterback Zach Wilson was 19 of 42 for 202 yards in the 30-9 loss to New Orleans last week. Wilson’s 45.2% completion rate was the second lowest of any quarterback with at least 40 attempts in a game this season.

“He had a couple that got away,” Saleh said. “He also had some that were on the spot. We didn’t help him with making plays. It’s something he has to improve on.”

Meanwhile, Dolphins quarterback Tua Tagovailoa has no accuracy concerns these days. He’s just the second Miami player — Chad Pennington being the other — to have three consecutive games with a completion rate of at least 73%.

The Jets have improved slightly on defense the past few weeks, but still have issues stopping the run and eliminating big plays. The Saints rolled up 203 yards rushing against the Jets, a figure Miami will be hard-pressed to come close to given its COVID-19 issues at that position.

“We’ve just got to continue to be consistent and execute every single play,” defensive tackle Quinnen Williams said. “If we can control those two or three explosives that happened, especially toward the end of the game, I feel like we can potentially be a great defense.”

The Dolphins are 18-14 all time after a bye week, including a win in 2017 that followed the “bye” coming in Week 1. This will be their sixth post-bye game against the Jets, with New York winning three of the first five.

Forecasters are calling for a high of 83 degrees in Miami Gardens on Sunday, as opposed to a 41-degree day expected in the New York area. “There’s going to be a challenge. It’s no different than a southern team coming up during the cold. But you’ve just got to be cognizant of hydration this week,” Saleh said.