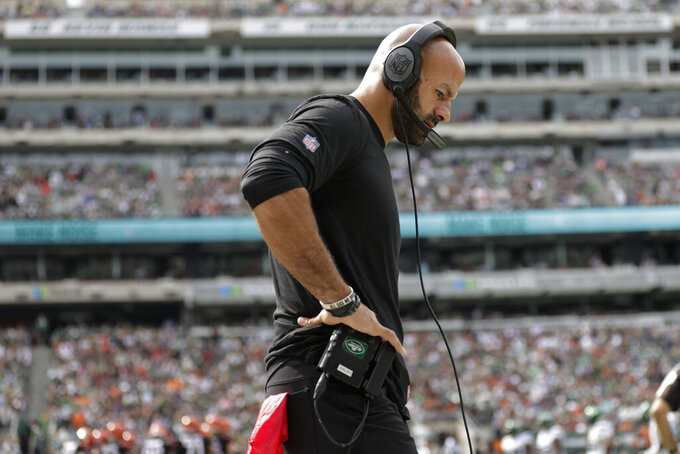 EAST RUTHERFORD, N.J. (AP) — It took just one week for all those positive vibes to turn into frustration — again — for the New York Jets.

The offense struggled, the defense couldn't make crucial stops and veteran players made key mistakes in a 27-12 loss to the Cincinnati Bengals on Sunday.

This dud came after a stunning 31-30 victory at Cleveland last Sunday when Joe Flacco rallied New York from a 13-point deficit with 1:55 remaining. That had many fans wondering if — even with starting quarterback Zach Wilson out and likely back next week — the Jets are a different team than the sorry squads that had so many awful Sundays the past few years.

And they still might be. But not on this day.

“It’s frustrating,” Saleh said. “Any time you turn the ball over and you only get one takeaway, obviously you’re not going to win the football game."

The Jets failed to get in the end zone all day against the Bengals, settling for four field goals from Greg Zuerlein. They went 7 of 18 on third down and 0 for 3 on fourth. Flacco was 28 of 52 for 285 yards and two interceptions, and was under pressure all game.

The frustrated fans at MetLife Stadium booed on a few of Flacco's throwaways when there was no one open. They also chanted for Mike White — who rallied the Jets to a 34-31 win over the Bengals last season — to get into the game.

“Fans want you to win,” Flacco said. “They’re here to watch their team win. You get their frustration.”

Truth is, those same fans don't want Flacco or White. They want Wilson, who the focus of this season is really on. The second-year quarterback has been out since injuring his right knee in the preseason opener. Saleh has said the earliest Wilson would return is Week 4 at Pittsburgh — and that's next Sunday.

“We’ll evaluate it all tomorrow,” Saleh said. “Expecting, but again, until the doctors say so, I’m going to just say that he’s being evaluated.”

The defense shared much of the blame for the loss, and it knew it was in for a long day when Burrow led an 11-play opening drive during which he was 8 of 10 for 95 yards and a touchdown.

At the beginning of the second quarter, defensive lineman Quinnen Williams and defensive line coach Aaron Whitecotton got into a sideline shouting match. Following Burrow's 56-yard TD to Tyler Boyd, Williams urged the coaches to switch to a four-man rush instead of seven.

“That came out of me to just challenge my D-line coach,” Williams said, “and be like, ‘Put it on our back, Coach. You know what we’ve got in this room — four-man rush!'”

Williams said he and Whitecotton are fine — "That's love right there. That's like a brother — and Saleh said he was not wrong to challenge the coaches.

“I love the fire,” Saleh said, adding he didn't necessarily like the jawing between the two.

But the defense has some real issues. For three games, the Jets have failed to consistently stop offenses — or get to the quarterback. Burrow had been sacked 13 times entering Sunday. New York got to him just twice.

Cornerback D.J. Reed said the defense — players and coaches — need to get better, and fast.

“It’s unacceptable,” Reed said. “So we’ve got to have a meeting and just talk about everything.”

There were also mental errors, in addition to Flacco's miscues. John Franklin-Myers was called for unnecessary roughness after landing on Burrow after a third-down incompletion. It was compounded moments later by a missed tackle by Jordan Whitehead on Boyd's 56-yard touchdown on the last play of the opening quarter.

Lamarcus Joyner was called for an unnecessary roughness penalty after he hit Tee Higgins with the crown of his helmet in the second quarter. It put the Bengals in Jets territory, and they got a field goal.

And with the Jets driving late, wide receiver Corey Davis was called for a personal foul when he grabbed cornerback Eli Apple's facemask during an argument — pushing New York from the Bengals 14 to the 29, and the Jets didn't score.

“Our vets made critical mistakes at critical times,” Saleh said. "JFM had the critical third down foul which, ticky-tack or not, he just doesn’t have to. And then Corey with the penalty he had.