Mock Draft: As usual, it's all about the quarterbacks 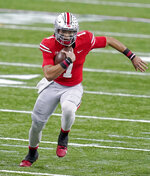 Because they are make believe, mock drafts tend to go wild. Lots of projected trades. Runs on specific positions. A surprise pick or two.

For this year’s selection process there is an obvious trend — one that should stun nobody. It’s all about the quarterbacks, with potentially the first four spots being occupied by passers.

Here's one look, barring trades, at what might happen Thursday night in Cleveland, one year after the NFL successfully pulled off a virtual draft because of the COVID-19 pandemic.

Just like in 2020 with Joe Burrow, this one is a slam dunk as new coach Urban Meyer gets his signal-caller.

Perhaps the Jets will have more luck behind center with this pick than they did with the oft-injured and disappointing Sam Darnold, now in Carolina.

3. San Francisco (from Miami via Houston)

Clearly, GM John Lynch and coach Kyle Shanahan had someone targeted to be their future quarterback when they made this deal. That target is ...

If Julio Jones can stay healthy and Calvin Ridley keeps soaring, the Falcons could have one of the league's most dangerous offenses by adding ...

Thanks to the early concentration on QBs, the Bengals were sitting pretty here, knowing they would get either Pitts or ...

Hey, Tua, remember how LSU outscored 'Bama in 2019? One of the reasons for that is now your teammate.

If the Lions remain here, they will add a big-time threat for new passer Jared Goff. The question is do they go for Heisman Trophy winner DeVonta Smith or teammate Jaylen Waddle?

There is no more obvious example of how offense matters most in the NFL these days as the Panthers make it eight straight players from that side of the ball.

We have a feeling the Broncos are not sold on Drew Lock as their long-term quarterback, and with two prime prospects remaining, Denver grabs one.

Finally, a defensive player, and the Cowboys have their pick of the litter. Do they go pass rusher, linebacker or help for the secondary?

Selecting 11th often is a difficult spot because so much potentially elite talent is gone. Not this year as the Giants debate taking a playmaker on offense or defense.

Philly wanted Horn to bolster its worrisome secondary, but the division rival grabbed him. So the Eagles add to their receiving group.

Having solved any quarterbacking issues with Offensive Rookie of the Year Justin Herbert, it's time to grab a protector for him.

Here come the pass rushers, and the Vikings luck out by getting the top guy. And yes, it is remarkable that a potential sackmaster lasted this long. Blame the QBs.

Do the Patriots truly believe Cam Newton can get them back to prominence now that Tom Brady is winning titles in Tampa Bay? We don't buy it.

Running back is a need, but this is too soon with so much talent at other positions still on the board. How about one of the top two linebackers?

Coach Jon Gruden loves speed. So far, in his return to coaching, the fast lane has not worked out very well, in part because of injuries to Raiders prospects. Here goes the other best linebacker.

Having Chase on hand to invigorate the offense, Miami could use some disruptive skills on the outside of the D-line. Staying local ...

Ron Rivera, as usual, has built a solid defense. The offense is a bit muddled up front, so bringing in a blocker makes sense.

Fans around Grant Park will be screaming for some offensive talent. But the best players still on the board play defense.

One of the better drafting teams in the league in recent years, the Colts need a tackle with the retirement of Anthony Castonzo. That might not be the best value here, though, so look for a pass rusher.

Can't see the Titans addressing anything but their struggling defense, which needs a pass rusher, a linebacker and a cover cornerback. Despite some back issues, go for the CB ...

With the pick acquired in the Jamal Adams trade, the Jets would like a cornerback, but the best are gone. They have so many needs that an offensive lineman, pass rusher or receiver is an option. Possibly even a running back.

The Steelers could use some help in the trenches, particularly at center. They can address that with their next pick, though. A tackle seems more likely.

Some believe Meyer will add to his Clemson collection with running back Travis Etienne. We think he goes defense for the top safety in this class.

A team seemingly on the rise, though the hysteria along Lake Erie ignores the fact the Browns aren't one player away. Defense is the right choice to fill a key hole, particularly if Jadeveon Clowney flops again.

There still are lots of wideouts available at this draft's deepest position, so does Baltimore dive in here or wait and take a defender?

With Drew Brees retired, there's a belief the Saints are in transition. Coach Sean Payton and GM Mickey Loomis don't see it that way.

Guaranteed the Packers don't take a quarterback this time. Please, give Aaron Rodgers another playmaker on offense.

The Bills seem uncertain about their linebacking group, particularly after the Matt Milano saga. One of the rising players on draft boards goes here ...

Baltimore got this spot in a swap with the Chiefs, who desperately need offensive line help and acquired Orlando Brown Jr. in the deal. So, the Ravens, having bolstered their receiving group, need an O-lineman.

The Bucs did such a strong job in free agency as they kept their gang together for another Super Bowl run. They'll close out the opening round with the best remaining overall prospect.