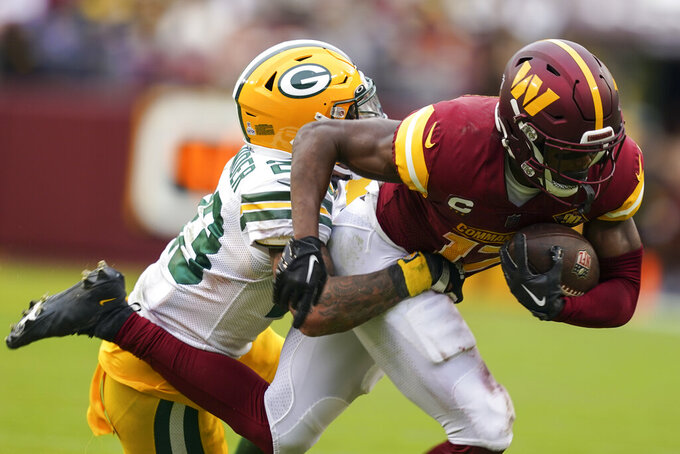 A handful of times in his first start of the season, Taylor Heinicke threw the ball right at Terry McLaurin with a defensive back on him and counted on the Washington Commanders’ top wide receiver to make a play.

“They pay that guy a lot of money, right?” Heinicke said. “So let’s give him a chance.”

Giving McLaurin several chances on eight targets added up to five completions for 73 yards, including a 37-yard touchdown, in Washington’s second consecutive victory, 23-21 against the Green Bay Packers on Sunday — McLaurin’s first TD since the season opener. The reliance on him in that spot and a key third down late in the game turned out to be a winning recipe that should continue for Heinicke and the Commanders with a visit to the Indianapolis Colts up next.

“It really spoke to the confidence we have in Terry,” coach Ron Rivera said. “I mean, that’s why we did what we did in terms of signing him. Those are the kind of moments Terry is immense, and we’ve got to be willing to take those shots.”

Heinicke, who took over for injured starting quarterback Carson Wentz, has shown a willingness to do that. He and McLaurin developed significant chemistry last season when Heinicke started 15 games and appeared in 16, finding McLaurin 77 times for 1,053 yards even with opposing defenses making the 2019 third-round pick a focal point.

The Commanders signed McLaurin this past summer to a three-year extension worth up to $71 million with roughly $53 million guaranteed, including a $28 million signing bonus. After being targeted a total of 37 times in the first six games — four of them losses — McLaurin was glad to again be earning his money and trust from the coaching staff and teammates.

"You’ve got to put the work in, and you have to earn that respect from your teammates and then you’ve got to go out there and make a play," McLaurin said. "I’m just so blessed to be in this situation where I’m trusted to be a leader and make those plays in critical moments.”

While a consistent running game is the bedrock, having more moments for McLaurin is a winning formula for the Commanders, who at 3-4 still need to go on a run to catch up with the rest of NFC East. And McLaurin relishes being the offense’s best playmaker.

Leaning on lead back Brian Robinson Jr. and change-of-pace Antonio Gibson and mixing in some receiver Curtis Samuel, the Commanders rushed for a season-high 166 yards against the Packers. That allowed them to control the clock with some extended drives and dominate time of possession 37:07 to 22:53.

The defense also limited Green Bay to 38 yards on the ground, by far a season low.

“They’re a terrific running football team,” Rivera said. “To be able to slow that down says a lot about what we do on defense.”

Heinicke had a pick-6 and then was bailed out on a fumbled returned for a touchdown by an illegal contact penalty. He and the Commanders need to avoid those kinds of big mistakes given their tiny margin for error offensively.

Cornelius Lucas started again at right tackle despite Sam Cosmi being back in uniform after surgery to repair a finger injury. Perhaps Cosmi eventually moves inside to guard, but Lucas has played well enough to keep his spot.

Now that Gibson, who was a receiver in college, is freed up to do more things by Robinson becoming the between-the-tackles runner, pass-catching running back J.D. McKissic is less of a factor, through little fault of his own. McKissic has not had a catch in either of the past two games.

Pass rusher Chase Young is one step closer to returning from a torn ACL after meeting with Dr. James Andrews on Sunday, a discussion Rivera described as “all positive.” Young is working back from surgery to repair the injury to his right knee, with he and the team taking a cautious approach that has caused him to miss the first six games this season.

Rookie wide receiver Jahan Dotson could return Sunday against the Colts after missing the past three games with a hamstring injury. Fellow wideout Dyami Brown missed the Packers game with a groin injury.

Cornerback William Jackson’s back injury bears watching. He was benched for performance a few weeks ago but has been on the injury report and scratched since, with the defense holding up better without him and rumors swirling ahead of the Nov. 1 trade deadline.

0 — Third-down conversions allowed against Green Bay, the first time Washington held an opponent without one since Week 3 in 2017.

It’s Heinicke’s show, with Wentz missing what would have been a stop on his revenge tour at Indianapolis, which opened on FanDuel Sportsbook as a 4½-point favorite.