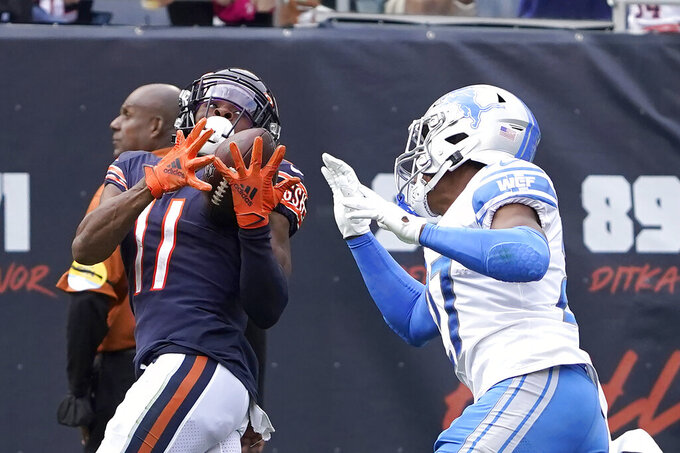 LAKE FOREST, Ill. (AP) — The Chicago Bears' offense has dealt with adversity from injuries since the second game of the season.

It will only worsen heading into preparation for their game Sunday at Las Vegas against the Raiders, because now the injuries include running backs as well as quarterbacks.

The knee injury suffered by running back David Montgomery in a 106-yard effort during a 24-14 win Sunday over the Detroit Lions will be an uncertain situation to watch going forward.

“Again, we’ll know more with that as we go here the next couple days,” Bears coach Matt Nagy said on Monday. “For us, you hope that, but once we know more then that will give us more clarity with that.

“With a lot of this offense going through him, I think a lot of you feel it, you see it, his energy, his passion, the way he runs the football. The other stuff that you (media) can’t always see is how he is in practice and how focused he is and how he runs that huddle at times. You love that about him. So we’ll keep our fingers crossed and see where he’s at.”

Add this to the uncertainty at quarterback whether rookie Justin Fields will be asked to start for the third straight time because of the knee injury to starter Andy Dalton, and it will be another week of guessing for Nagy and the offense.

The fact Fields did a complete turnaround Sunday by going 11 of 17 for 209 yards won’t change things.

“When we work through this whole process, we gotta see where Andy’s at health-wise these next two days,” Nagy said. “That’s important.

“Like we said this whole time, when Andy’s healthy, he’s our starter."

Nagy offered no further update on Montgomery’s health, but it was reported by NFL Network after Sunday’s win to be a hyperextension with no serious structural damage.

The Bears also have to contend with a quad injury to backup running back Damien Williams. So it’s possible they might need to rely on rookie running back Khalil Herbert.

“It’s one of those deals where, I can remember in the preseason, several years ago when Spencer Ware tore his ACL against the Seahawks (for Kansas City) in preseason game three or four and a running back by the name of Kareem Hunt stepped up and became pretty good,” Nagy said. “You just never know where guys are and how they go.

"If that’s the case, we have confidence in him.”

The running game was allowed to work and flourished against Detroit with season highs of 39 carries and 188 yards, as offensive coordinator Bill Lazor took over play-calling. It was the third-highest rushing yardage total they’ve had with Nagy as coach.

Run defense. The Bears started the season strong here and figured to become even stronger when nose tackle Eddie Goldman returned Sunday for his first game since 2019, but defensive end Akiem Hicks went out on the defense’s first play with a groin injury. The Bears gave up 90 yards rushing, not a large amount, but those all came before the Lions fell behind by three touchdowns and focused on the passing game.

Darnell Mooney made progress as a wide receiver who can get open downfield. Mooney’s career-high 125 yards came on five receptions, including catches of 64, 32 and 21 yards.

“When the run game is going good, the pass game opens up,” Mooney said.

Cole Kmet and the team’s tight ends continue to have trouble getting involved in the passing game. Kmet had one reception for 6 yards in three targets and has eight receptions on the year. Jimmy Graham and Jesse James were untargeted Sunday and Graham is the only tight end with a reception this year besides Kmet. He has one catch, none in the past three games.

“We have in this offense a lot of good playmakers and so sometimes, whether it’s play design or whether it’s just unlucky that they didn’t get it, just so far this year, there hasn’t been a lot of targets,” Nagy said.

“Now at the same point in time the tight ends yesterday I thought did a good job of really saying, ‘You know what, we’re gonna get after it (blocking) in the run game a little bit and we’re gonna be a big part of it.’ ”

Besides Montgomery and Williams, the Bears had defensive end Akiem Hicks leave on the first play with a groin injury and Khalil Mack played on only 48% of the defensive snaps as he was dealing with a foot sprain coming into the game.

5 — The number of pass plays longer than 20 yards by the Bears against Detroit. Before Sunday they had one total for the season’s first three games.

The Bears are at Las Vegas to play the Raiders, who finish Week 4 with a Monday night road game against the Los Angeles Chargers.