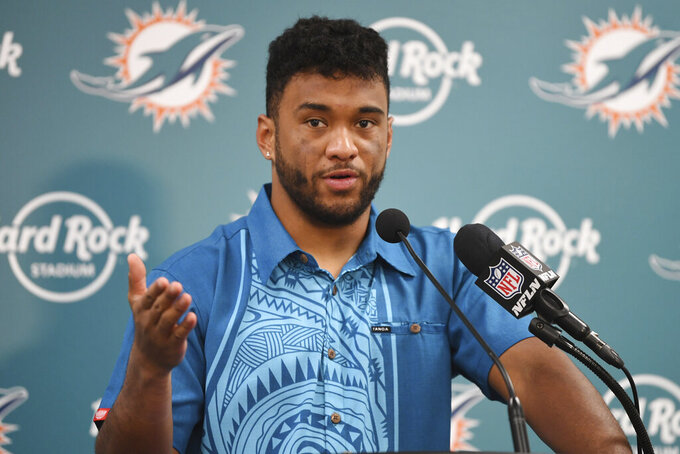 Before the season, McDaniel compiled a highlight reel of about 700 of Tagovailoa’s best plays in an attempt to boost his young quarterback’s self-assurance. That detail was first reported on the CBS broadcast of Miami’s 30-15 win over Houston on Sunday.

Tagovailoa’s first two NFL seasons were filled with turmoil. He dealt with various injuries. He was benched multiple times in his rookie year. When he failed to take a leap in Year 2, Miami actively shopped for his replacement.

Tagovailoa told CBS that he looked at himself in the mirror multiple times last year and asked, “Do I suck?” as the Dolphins' belief in him seemed to wane with each passing week.

McDaniel, hired by Miami in February, wanted to make sure Tagovailoa knew he had greatness inside him.

“Anybody that’s drafted as a quarterback in the top 10, top five, they want to be good,” McDaniel said. “To be drafted super high and then fall short of the franchise’s expectations, that is a tough place to live in. That was the motivating factor behind everything.”

In Year 3, Tagovailoa has more support than he's ever had in his pro career. And that has made a difference in his play. He has led the Dolphins to an 8-3 record and has the NFL’s best passer rating (115.7).

“I think anyone here can attest to someone believing in them,” Tagovailoa said, “and how that changes how they see themselves but also things around them, so perspective.”

Before being pulled in the third quarter of Sunday’s game, which the Dolphins led 30-0 at halftime, Tagovailoa completed 20 of 34 passes for 278 yards and one TD. He has posted a passer rating of at least 90 in each of his past six home starts.

“He had the stuff on the tape. I think that’s a credit to him,” McDaniel said. “To his credit, he’s really listened, taken the coaching that he’s good. Said ‘OK, Coach, I believe you.’ And I think you guys have seen the residuals up close and personal for a while.”

Miami’s defense had one of its best performances of the season Sunday, generating pressure and turnovers, which has been a focal point in recent weeks. The Dolphins limited Houston to 210 total yards, had a season-high five sacks, forced three turnovers and scored a defensive touchdown.

Miami’s running game has been inconsistent for most of the season but was trending upward since the Dolphins acquired Jeff Wilson at the trade deadline. With Raheem Mostert inactive because of a knee injury, Wilson had 13 carries for 39 yards Sunday, his fewest since joining the team.

Safety Eric Rowe played a season-high 55 snaps Sunday and jarred the ball loose with a hit on Texans tight end Jordan Akins, which led to a fumble recovery and touchdown by Xavien Howard.

After veteran left tackle Terron Armstead left late in the second quarter with a pectoral injury, the Dolphins' offensive line gave up four sacks. Armstead has dealt with a toe issue all season, but Miami’s offensive line is clearly better when he’s on the field. Brandon Shell replaced Armstead at left tackle, and it’ll likely be either Shell or Greg Little in that spot when the Dolphins face San Francisco on Sunday.

McDaniel said he would know more about the extent of Armstead’s pectoral injury after testing. ... RT Austin Jackson left the game with an ankle injury. He made his first start since Week 1 after dealing with ankle and calf issues.

174 — Tagovailoa's pass attempts since his last interception, which is a Dolphins record.

Miami will begin a three-game road stretch against San Francisco in Week 13. After that, the Dolphins will face the Los Angeles Charges and Buffalo Bills before returning home to play Green Bay on Christmas Day.