Morris says Falcons must learn to 'force our will' on teams 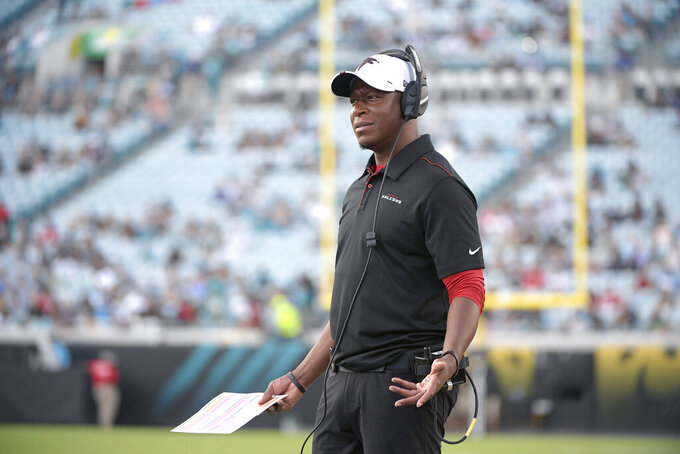 ATLANTA (AP) — Raheem Morris says the Atlanta Falcons' only path to winning is by learning to “force our will on an opponent” and he says that tough approach will be what distinguishes his term as interim coach from Dan Quinn, his fired predecessor.

Morris, who had been Atlanta's defensive coordinator, was named interim coach on Monday. Quinn was fired on Sunday night following the team's first 0-5 start since 1997. The Falcons also fired general manager Thomas Dimitroff.

Quinn led the Falcons to their second Super Bowl appearance in the 2016 season. The pain of that Super Bowl loss to New England, when Atlanta blew a 28-3 lead, was revisited this season when the Falcons became the first team in NFL history to blow fourth-quarter leads of at least 15 points in back-to-back games.

The blown leads in back-to-back losses to Dallas and Chicago helped to seal Quinn's fate.

The tough talk ties into learning to hold a lead. It's a logical place for Morris to start as he begins his 11-game stint as interim coach.

“At the end of the day we’ve got to find a way to put our foot on people’s throats in games and that’s what’s got to happen,” Morris said Tuesday.

The Falcons play at Minnesota on Sunday.

He had a quick answer when asked if he saw the interim position as a possible path to another full-time job as coach.

“In case you haven’t paid attention in the last 24 hours, I’m the head coach right now of the Atlanta Falcons,” Morris said. “I’ve got 11 games guaranteed to do that. ... I am completely focused on the Minnesota Vikings."

Morris remains loyal to Quinn. The relationship between the two began when Quinn was a defensive assistant at Hofstra, where Morris was a safety. Morris has worked on offense and defense with Quinn in Atlanta.

Morris expressed his “gratitude to Dan Quinn ... and what he has meant personally to me in my life. I’m talking about a guy who brought me to the game, who coached me in college and brought me with him to Atlanta. He has meant the world to me.”

Quinn's firing left Morris with what he acknowledged were “bittersweet” emotions. Morris must make changes instead of simply continuing in Quinn's path that included back-to-back 7-9 finishes the past two years.

Quarterback Matt Ryan, speaking on a local Atlanta sports talk radio station, said Morris will have the support of players.

“I think he’s got a good pulse for our team, having coached on the offensive side and on the defensive side of the ball,” Ryan said. “He knows the guys. He relates to the guys well. I think it’s obviously a tough spot to come into, there’s no doubt about that, but I do think he’ll be able to keep the locker room kind of tight end unified.”

Morris noted he and Ulbrich shared leadership of the defense in 2019.

NOTES: The Falcons placed rookie DT Marlon Davidson on the Reserve/COVID-19 list. Teams cannot reveal if a player has tested positive or is in quarantine because of exposure to someone who has tested positive. The Falcons also signed CB Tyler Hall to the active roster and signed LB James Burgess to the practice squad.