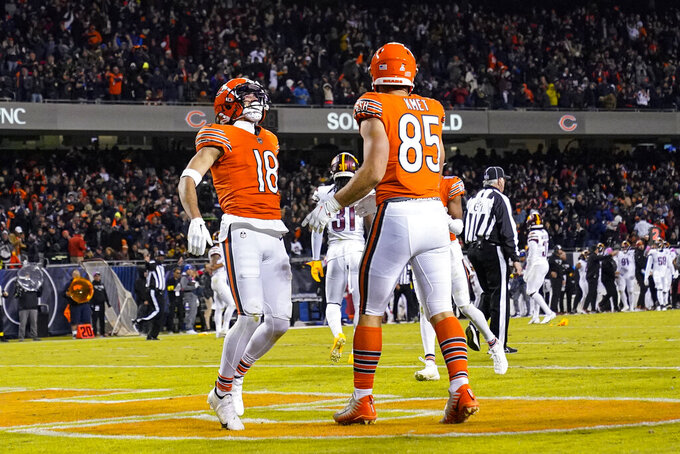 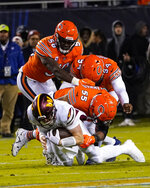 CHICAGO (AP) — Brian Robinson scored plenty of touchdowns during his stellar career at Alabama. The rookie's first as a pro came at a big moment.

Christian Holmes recovered a muffed punt by Velus Jones deep in Chicago territory to set up a 1-yard touchdown by Robinson midway through the fourth quarter, and the Washington Commanders stopped a four-game losing streak, hanging on to beat the Bears 12-7 on Thursday night.

“It was a huge,” quarterback Carson Wentz said. “We've been on a skid lately, we've been in some tough games, had some tough go's with it. This one was huge.”

This one might not have been quite as ugly as the Colts-Broncos yawner a week earlier that had famed play-by-play announcer Al Michaels launching zingers and creating a buzz on social media. There were plenty of bad reads, tipped balls, overthrown passes and sloppy play in general. But there was also no shortage of drama down the stretch.

The Commanders (2-4) were aided by two turnovers after taking the ball away just once in the first five games and won for the first time since beating Jacksonville in the opener. Jonathan Allen intercepted Justin Fields' pass deep in Washington territory in the first half.

Robinson — playing his second game in five days, less than seven weeks since being shot twice in the right leg in an attempted robbery — scored his first career touchdown. Benjamin St-Juste stopped Darnell Mooney just shy of the end zone in the closing minute of the game, sending the Bears (2-4) to their third loss in a row.

Washington caught a huge break when it punted on fourth down at its 37. Jones had trouble tracking the ball, then let it hit off his arms.

Holmes recovered it in a big pile at the 6, and Robinson scored two plays later, making it 12-7 with 7:21 remaining.

Wentz overthrew Curtis Samuel in the back of the end zone on the 2-point conversion attempt, and Joey Slye missed a 48-yard field goal wide left with 1:48 remaining.

Fields then broke off a 39-yard run to the 5. But after blowing two big scoring chances in the first half, the Bears let another slip away.

Dante Pettis was unable to hang onto a third-down pass in the end zone with Darrick Forrest all over him. A leaping Darnell Mooney got knocked out of bounds by Benjamin St-Juste inches shy of the goal line as he hauled in a pass.

Fields, whose left shoulder was bothering him, completed 14 of 27 passes for 190 yards and a touchdown after setting career highs in completion rate (71.4 %) and passer rating (118.8) against Minnesota on Sunday. He threw a 40-yard touchdown to Dante Pettis in the third. But was intercepted by Allen with the ball on the Washington 5 late in the first quarter when he threw a laser that hit defensive tackle Efe Obada’s helmet and popped into the air. Allen came away with the interception

“I think he took a step forward, I really do,” coach Matt Eberflus said. “The toughness. For me, the ability to take the ball and drive it down at the very end, to give us a chance to win it — that's to me what was the improvement. Were there other moments that we need to clean up and the offense needs to clean up? Sure. But we had the drives down there, and if we punch those in, the game's a different game."

Pettis had four catches for 84 yards.

The Bears, wearing orange jerseys and helmets, blew huge scoring chances on back-to-back possessions in the first half. After Fields' pass was picked off by Allen, the Bears had another big chance early in the second.

Khalil Herbert broke a tackle and crossed the field on a 64-yard run to the 6. But Fields overthrew a wide-open Ryan Griffin in the end zone and Herbert got stopped on fourth down at the 1.

Joey Slye gave Washington a 3-0 lead when he kicked a field goal in the closing minute of the first half.

Commanders: TE Josh Bates (hamstring) was hurt in the first half. ... Wentz said his shoulder felt fine, though his hand was sore after he hit it on a helmet.

Bears: G Lucas Patrick (concussion protocol) was hurt blocking on a run early in the third quarter, but quickly returned to the game. ... WR N’Keal Harry was a healthy scratch, potentially setting him up to make his Bears debut at New England on Oct. 24. Harry, a first-round pick by the Patriots in 2019, was acquired from New England in July and suffered an ankle injury in training camp that required surgery.