Murray shows he's worth $230.5 million to Cards in comeback 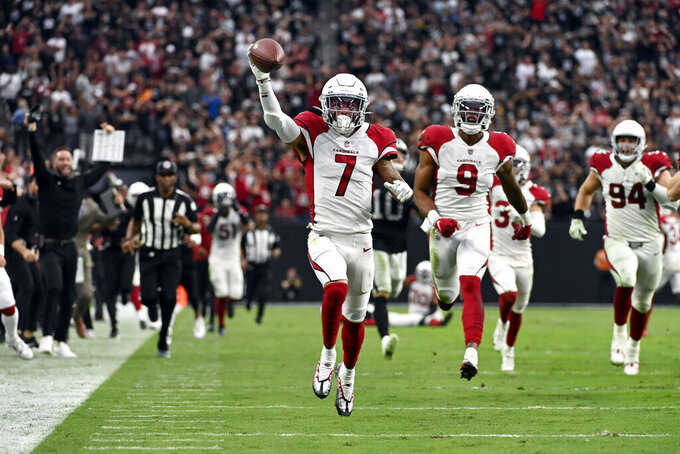 Arizona Cardinals cornerback Byron Murphy Jr. (7) runs back for the winning touchdown after a fumble recovery during overtime of an NFL football game against the Las Vegas Raiders, Sunday, Sept. 18, 2022, in Las Vegas. (AP Photo/David Becker)

TEMPE, Ariz. (AP) — From the football abyss to overtime elation, the Arizona Cardinals had quite a range of emotions Sunday.

It all ended with the Cardinals celebrating a 29-23 overtime victory over the Las Vegas Raiders after clawing back for the stunning win after trailing 20-0 at halftime. Byron Murphy Jr. returned Hunter Renfrow’s fumble 59 yards for a touchdown with 3:51 left in overtime to secure Arizona's win.

Murphy had the big moment, but this was Kyler Murray's comeback.

The quarterback was spectacular in the second half and finished 31 of 49 passing for 277 yards, one touchdown and one interception.

“At some point, enough is enough,” Murray said. “Again, it is not about the toughness and how hard we play, that’s never the question. It’s just about executing, playing faster, getting our tempo going. I think you can tell the difference between the first half and second half."

The jubilation from Sunday's ending did a lot to wipe away the frustration from falling into a 20-0 hole, but not completely.

Arizona was penalized 12 times for 120 yards on Sunday. It's a trend that has dogged the Cardinals of late — they were also the fourth-most penalized team in 2021. The Cardinals (1-1) gained just 86 total yards in the first half before heating up in the second half.

“Effort is never an issue with this team,” Cardinals coach Kliff Kingsbury said. “We have to tighten it up — coaches and players. Execute.”

Arizona's offense looks as though it can still be productive while three-time All-Pro receiver DeAndre Hopkins serves his six-game suspension for violating the NFL's policy on performance-enhancing drugs.

Tight end Zach Ertz caught eight balls for 75 yards, Marquise Brown had six catches for 68 yards and veteran A.J. Green had a crucial grab on the 2-point conversion that tied the game at 23 and forced overtime. Journeyman receiver Greg Dortch continued his breakout season with four catches for 55 yards and a touchdown.

The Cardinals also ran for 143 yards, led by Darrel Williams, who finished with 59 yards rushing and a touchdown.

They escaped Vegas with a miracle comeback, but that's not a recipe for success.

If anyone forgot that Murray can be a superstar, they were reminded of it Sunday. The fourth-year quarterback made multiple incredible plays during Arizona's comeback against Las Vegas, including a 20-second scramble for a crucial 2-point conversion. That's exactly why the Cardinals felt comfortable handing Murray a $230.5 million, five-year deal this summer.

LB Isaiah Simmons lost his starting job after one week but had the team’s biggest moment in Week 2, forcing Renfrow’s fumble that was returned by Murphy for the overtime touchdown. Simmons has been an enigma for the Cardinals during his first three seasons and it's hard to know where he goes from here. He obviously can make big plays, but was on the field for just 15 snaps against the Raiders.

“He can be as good as wants, I'll say that,” Kingsbury said. “He knows that. He knows that's how we feel about him. We've addressed it many times. It's a commitment to football all day, every day, and being the best possible player you can be. You see the flashes. If he can do that consistently day in and day out, the sky's the limit.”

RB James Conner was slowed by an ankle injury after his first carry of the second half. Said Kingsbury: “He'll be day to day. He's a tough guy. We just wanted to make sure he was 100% if we were going to put him back in.”

9-1 — That's Arizona's regular-season road record since the start of the 2021 season, which is the best mark in the NFL. The Cardinals are 13-5 on the road over the past three seasons. Only Kansas City and Tampa Bay have higher road winning percentages over that span.

It doesn't get any easier for the Cardinals, who host the defending Super Bowl champion LA Rams on Sunday. Arizona has to figure out a way to play better during the first half and also must play better at home. The Cardinals are just 3-6 at State Farm Stadium since the beginning of last season.