New coach Daboll ready to get to work with Giants 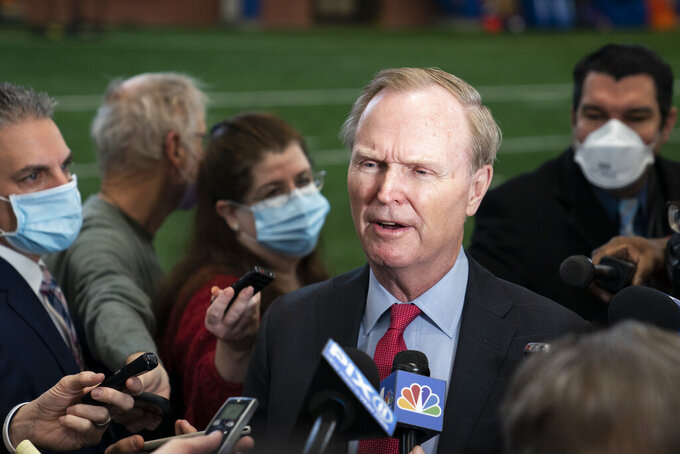 EAST RUTHERFORD, N.J. (AP) — A personable and quick-witted Brian Daboll plans to rebuild the New York Giants working with the players they have and building schemes to fit their skills.

Speaking at his introductory news conference Monday, the former Buffalo Bills offensive coordinator created some news, saying Pat Graham will return as the Giants defensive coordinator if he does not get a head coaching position with another team.

The 46-year-old Daboll spent 40 hours over the weekend, talking with candidates for his coaching staff, including some others members of Joe Judge's staff.

Daboll would not put a timeline on turning things around for the Giants, who went 4-13 this past season, their fifth straight double-digit losing season. They have made the playoffs once (2016) since winning the Super Bowl in February 2012.

“All I know how to do is work, work with people, try to build a culture, unite a building, inspire players, coaches, support staff; listen, learn and then ultimately develop the people in our building,” Daboll said.

Daboll's biggest job will be to turn around the Giants' anemic offense and to get more out of quarterback Daniel Jones. The No. 6 overall pick in 2019 has had three consecutive seasons of change since joining the NFL. This will be No. 4 for Jones, who missed the final six games of the season with a neck injury.

Daboll refused to compare Jones with other quarterbacks, adding it's his hope to provide him with some stability.

If anything came across at the news conference it was Daboll's personality. He was relaxed, at ease with who he is. He frequently joked with reporters, asking one if he came in late when he knew he did; and another who had a distinct New York accent: “Are you from South Carolina?”

Daboll said he believes in five things: Being authentic, consistent, communicating clearly, building relationships and being a leader.

Daboll, who also interviewed for the head coaching job with the Dolphins, said one of the things that drew him to the Giants job was the chance to work again with new general manager Joe Schoen. The two spent the past four seasons in Buffalo, with Schoen serving as assistant general manager.

Schoen said that Daboll's personality wasn't an act. What people saw is what they can expect.

“He can joke around and communicate with anybody on the team, whether it’s the 90th man or the best player on the team,” Schoen said. “He truly cares about the players and who they are as human beings and wants the best for them.”

Daboll poked fun at himself when asked if he had a tough side. In his first season with the Patriots, he was a graduate assistant running a scout team and some player whose name he could not recall, botched a play. He quickly went off on the guy, shouting a few colorful phrases.

In the middle of it, then-veteran linebacker Willie McGinest walked over to him and said: “Hey, little guy, relax!”

Daboll quipped his six children could discuss his tough side.

“I think you as a leader have to have tough conversations, truthful conversations and each situation is a little bit different,” he added.

Daboll is the fourth head coach hired by the Giants since 2016. Ben McAdoo got the job in '16 and led New York to the playoffs. He was gone by December 2017, even before the end of a 3-13 season. Pat Shurmur lasted two years and Judge got the next two.

How long Daboll lasts remains to be seen.

Giants co-owners John Mara and Steve Tisch have hired a new general manager and coach in the past three weeks. They have some tough salary cap decisions to make on players to create cap room and then free agency and the draft.

“There’s no rest,” Mara said. “And I’m not going to rest until we start winning games.”