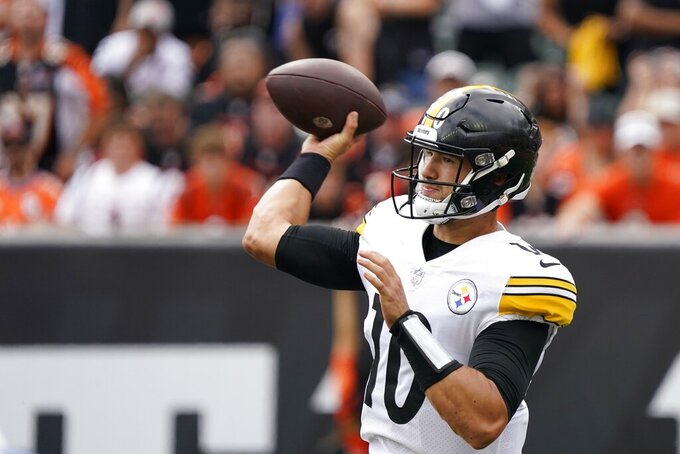 Pittsburgh Steelers quarterback Mitch Trubisky (10) throws during the second half of an NFL football game against the Cincinnati Bengals, Sunday, Sept. 11, 2022, in Cincinnati. (AP Photo/Joshua A. Bickel)

PITTSBURGH (AP) — For the better part of two decades, the Pittsburgh Steelers and New England Patriots would meet almost annually in a rivalry heavy on stakes and star power.

Not with Ben Roethlisberger in retirement, Tom Brady in Tampa and the two teams that defined excellence in the AFC throughout the 2000s and 2010s undergoing transitions.

When the Patriots (0-1) walk onto the Acrisure Stadium turf on Sunday to face the Steelers (1-0), it will mark the first time since 1998 that the two marquee NFL franchises face off without either Brady or Roethlisberger (or both) in the huddle.

“It's going to be funny the first couple plays not seeing (Brady) out there,” longtime Steelers defensive end Cam Heyward said.

And maybe a relief, too. Brady typically toyed with Pittsburgh, beating the Steelers in the AFC championship game three times or swatting them aside during the regular season with startling regularity.

Yet the near-constant churn that embodies the modern NFL finally has shaken two teams that have long used the other as a measuring stick.

“I can’t remember the last time we’ve gone three years without playing the Steelers,” New England coach Bill Belichick said. “It seems like it’s been a team we’ve usually played every year. Obviously, it’s been a little while. Some definite changes since the last time we saw them.”

The Steelers have just three players — Heyward, linebacker Devin Bush and safety Terrell Edmunds — who were in the starting lineup the last time New England and Pittsburgh met, a 33-3 clinic by the Patriots in the 2019 season opener.

The turnover is just as stark in New England, where Belichick is in Year 3 of the post-Brady Era, trying to keep his team afloat in an AFC where the swagger that long seemed the Patriots' birthright has shifted to places like Kansas City and Buffalo.

Not so long ago, Pittsburgh vs. New England forced the league to stop and watch. This is the first time since that 1998 game — a 23-9 Patriots win — that a regular-season contest won't be played in the late afternoon showcase window or in prime time.

New England is hoping to avoid its first 0-2 start since 2001, months before Brady took over for an injured Drew Bledsoe and began the nascent stages of what became the greatest dynasty in NFL history. The Steelers began life after Roethlisberger with a dramatic victory in Cincinnati. If they can back it up against a team and a coach that's long had their number, they'd offer tangible evidence their retooling after Roethlisberger may be well ahead of schedule.

“(A win) would set us up for things to come,” Edmunds said.

The Steelers will be without reigning NFL defensive player of the year T.J. Watt. The perennial All-Pro linebacker went on injured reserve Thursday with a left pectoral injury. Newcomers Malik Reed, acquired in a trade with Denver in late August, and Jamir Jones, now in his second stint with Pittsburgh after being claimed off waivers on Sept. 1, will be given a chance to fill in.

Reed is used to replacing generational players. He made the Broncos' roster as an undrafted rookie free agent in 2019 and in 2020 found himself taking over for injured Denver edge rusher Von Miller.

“I feel like being me, you know what I mean?” said Reed, who had 15 sacks in three seasons with the Broncos. “I feel like I’ve been able to play the game at a high level when my number was called.”

The glow from New England wide receiver Kendrick Bourne's dynamic rookie year in 2021 has faded quickly. Bournce slipped down the depth chart after a less than productive preseason that included him getting kicked out of a joint practice with Carolina for fighting.

Bourne was targeted just twice in last week's loss to Miami, though he did haul in a 41-yard reception. Jones expects Bourne's role to grow in the coming weeks.

“He just has to continue to be himself," Jones said. "He’s done a good job. He’s a great teammate, and we have a lot of guys on our team like that. I hope he can contribute more, and he will, and his time will come.”

Yet Pickens had just one catch for three yards in the opener, a game in which Mitch Trubisky's two longest completions came on catch-and-run tosses to tight ends Pat Freiermuth and Zach Gentry. Trubisky said he “definitely” is going to look for Pickens more regularly and thinks the deep balls will come more frequently as he settles into offensive coordinator Matt Canada's system.

“We’re just going to continue to take those shots and continue to work the timing in practice,” Trubisky said. “We would like to come up with those big plays.”