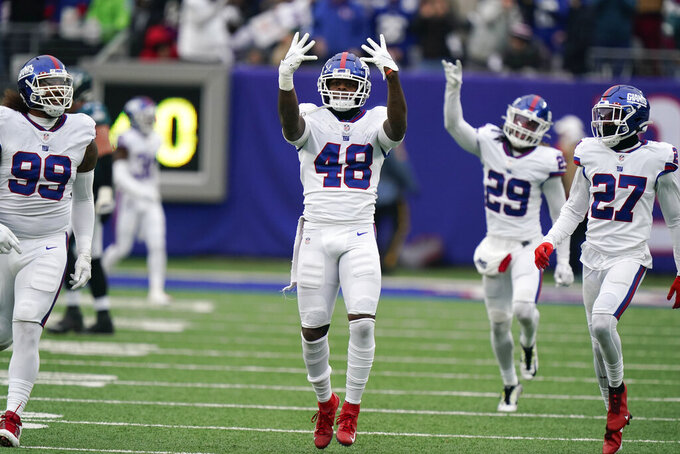 New York Giants' Tae Crowder (48) celebrates his interception during the first half of an NFL football game against the Philadelphia Eagles, Sunday, Nov. 28, 2021, in East Rutherford, N.J. (AP Photo/Corey Sipkin)

EAST RUTHERFORD, N.J. (AP) — A year ago, the New York Giants got off to a 1-7 start and remained in the playoff race all season because they played in the weakest division in the NFL — the NFC East.

Their postseason hopes ended in the finale when Washington (7-9) beat Philadelphia in a game in which the Eagles lifted starting quarterback Jalen Hurts in the fourth quarter trailing by three points. New York (6-10) finished a game behind in the division.

Things haven't changed much this season. Joe Judge and the Giants got off to another bad start (1-5) and they are now 4-7 after Sunday's 13-7 win over the Eagles.

Winning the NFC East will be tough. Dallas (7-4) is in first place with a three-game lead.

Hold on though, the NFC as a whole is weak this season. Six teams have winning records: Arizona, Green Bay, Tampa Bay, Dallas, the Los Angeles Rams and San Francisco. The Niners at 6-5 are at the bottom rung of that group.

Then comes the NFC's seventh playoff berth, the last of the three wild cards. The Giants are a game out of the seventh spot along with almost everyone else in the conference except Detroit (0-10-1).

The Giants have six games left to make a run at their first playoff berth since 2016. It's a long shot, especially because the offense isn't doing much and the O-line is banged up and not playing well. Wide receivers Sterling Shepard, Kenny Golladay and Kadarius Toney have been in and out of the lineup with injuries, and running back Saquon Barkley is still finding his way coming off last year's ACL surgery.

For the Giants to make it to the playoffs, the defense would have to continue its run of keeping the team in games and taking away the ball from opponents. Not likely, but who knows?

The bottom line is New York, embarrassed the previous Monday by the Buccaneers, has a shot in the weaker conference.

“We needed it bad, obviously,” safety Julian Love said. “But not just for a win in the column, but to just set a standard for who we are as a team. I think we’ve been preaching that we want to be a physical, tough, resilient team, and I think that showed today in a lot of ways.”

For the fourth time in five games, Pat Graham's defense held an opponent to 20 or fewer points. New York has won three of the games, losing to Kansas City 20-17. In the other games, New York beat Carolina 25-3 and surprised Las Vegas 23-16. Tampa Bay beat the Giants 30-10 on Nov. 22.

The O-line. While the line is down two starters and only allowed Daniel Jones to be sacked once Sunday, the running game is nonexistent. New York had 27 carries for 70 yards, a 2.6 yard average. Barkley had a 32-yard run. He finished with 40 yards on 13 carries, which means he had 8 yards total on the other 12 carries. It has to improve.

Aaron Robinson. The rookie cornerback stepped in after Adoree Jackson injured a quad and played very well. He had six tackles, two pass defenses, including one on Jalen Reagor late, and a quarterback hit. The third-round draft pick is making rapid progress after spending the first seven weeks of the season on injured reserve with a core muscle injury.

Riley Dixon. The punter had a season-worst 39.6 yard average with a 35.2 net average. In a close game, it was not what the Giants needed.

264 — The Giants fired offensive coordinator Jason Garrett after being held to a season-lows of 215 yards and 10 points against Tampa Bay. Former Browns coach Freddie Kitchens took over the play calling Sunday and New York gained 264 yards and scored 13 points. It wasn't much of an improvement.

Things won't change until the running game gets going. New York has been held under 83 yards in six of the last eight games.

The Giants kick off a road trip when they travel to Miami to face the hot Dolphins, who have won four straight after a 1-7 start. After the game the Giants are heading to Arizona for a week to prepare for a game in Los Angeles against the Chargers the following Sunday.