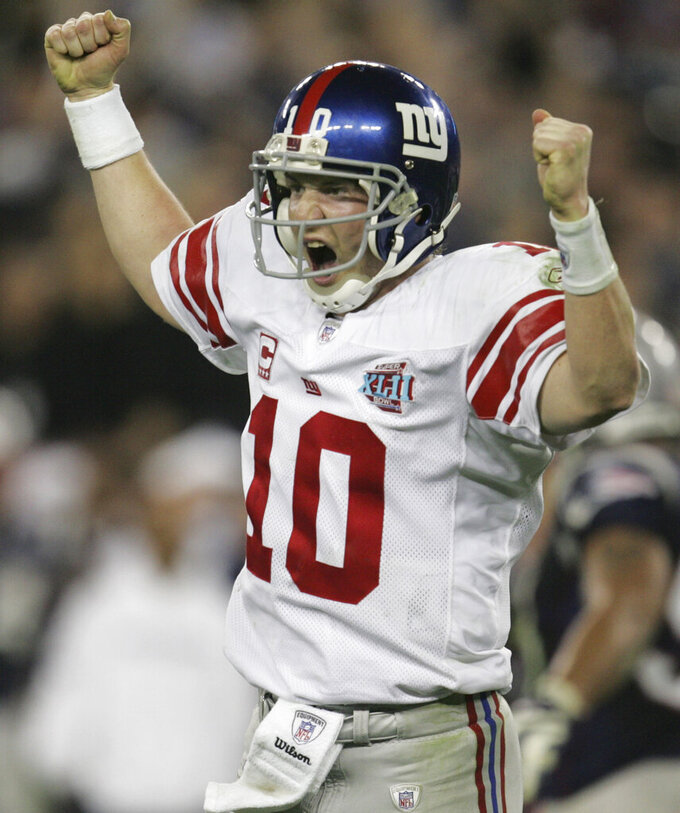 FILE - In this Feb. 3, 2008, file photo, New York Giants quarterback Eli Manning reacts after throwing the game-winning touchdown pass to Plaxico Burress during the fourth quarter of the Super Bowl XLII football game against the New England Patriots, in Glendale, Ariz. It was supposed the culmination of the perfect 2007 season for Tom Brady and the New England Patriots, and a fourth Super Bowl title since 2002. (AP Photo/Chris O'Meara, File) 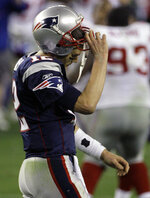 It was supposedly the culmination of the perfect 2007 season for Tom Brady and the New England Patriots, and a fourth Super Bowl title since 2002.

Few gave the New York Giants much of a chance in the NFL championship game on Feb. 3, 2008 in Glendale, Arizona, except the Men in Black who walked off their charter flight in Phoenix.

Yeah, the Giants deplaned dressed in black as if going to a funeral. But it wasn't for them. They knew better. They nearly beat the Patriots going all out in what for them was a meaningless final game of the regular season, and it gave them confidence.

Postseason wins over Tampa Bay, Dallas and Green Bay as a wild-card team fueled their belief. Then the Super Bowl game wasn't what anyone expected. The Giants' defense hounded Brady and shut down the league's historically dangerous offense. Eli Manning and company made just enough plays, even the unbelievable ones.

For the first time in 42 Super Bowls, there were three fourth-quarter lead changes. Manning to David Tyree put New York ahead 10-7. Brady to Randy Moss with 2:42 left gave New England a 14-10 lead. Manning then led New York on a winning 83-yard drive highlighted by Tyree's miraculous "Helmet Catch" for 32 yards on a play Manning escaped pressure. It ended with Plaxico Burress catching a decisive 13-yard pass in the left corner of the end zone with 35 seconds remaining for a 21-17 win.

The teams will meet again Thursday night at Gillette Stadium in what many thought would be another Manning-Brady showdown. That scenario ended two games into the season when coach Pat Shurmur benched his two-time Super Bowl MVP for rookie Daniel Jones, the sixth pick overall in the draft. Brady, age 42, will be there calling things for the Pats, who enter the game perfect, of course.

Here's a look at how that denial of perfection affected each team in subsequent seasons:

Coughlin and the Giants were in position to win another Super Bowl in the 2009 season, winning 11 of their first 12. The season turned when Burress shot himself in the thigh in a New York City nightclub on Nov. 29. It was the night before New York played Washington, a game Burress was going to miss with a hamstring injury. While they beat the Redskins, the Giants' offense was never the same. New York dropped four of its final five games, including a 23-11 loss to the Eagles in a division playoff game.

The Giants missed the playoffs the next two years, including 2010 when they failed to make it with a 10-6 record. The fourth Super Bowl followed in 2011 when New York squeezed in the postseason with an 9-7 record and again beat the favored Patriots after two postseason road victories.

Hard times followed. The Giants have only made the playoffs once since 2011. Coughlin was fired after the 2015 season. New coach Ben McAdoo got New York to the playoffs in '16 but it lost to Green Bay in the wild-card game after Odell Beckham Jr. and the receivers took an ill-advised trip to Florida for a boat ride.

McAdoo and general manager Jerry Reese were fired during a 3-13 season in 2017 just after Manning was benched for Geno Smith late in the season. Current general manager Dave Gettleman and coach Pat Shurmur have cleaned house and are rebuilding.

Following the loss to the Giants, the Patriots lost Brady in the '08 season opener to a knee injury. They still went 11-5, missing the playoffs on a couple of tiebreakers. Since, Brady and Bill Belichick have guided the Patriots to 10 straight AFC East titles. They have appeared in five more Super Bowls. They have played for the NFL title four of the past five years, winning three times.

New England has played in nine Super Bowls since Brady became the starter in 2001, winning six. Brady is showing no signs of slowing down, while the defense has been one of the league's best the past two seasons.

The only enjoyment for Patriots haters is the scandals: "Spygate," ''Deflategate" and owner Robert Kraft was charged with two counts of solicitation of prostitution in Florida.

The teams have played 12 times, with eight of the past nine decided by four points or fewer.

2011: The Super Bowl in Indianapolis, played in February 2012. Same story as the first title game. The defense made things miserable for Brady. There was another late miracle catch and the Giants got their second Super Bowl title under Coughlin and fourth in franchise history. Brady gave New England a 17-9 lead with TD passes to Danny Woodhead and the late Aaron Hernandez. Lawrence Tynes kicked two field goals to close gap to 17-15. Manning led a late nine-play, 88-yard touchdown drive. Mario Manningham made a spectacular over-the-shoulder catch in front of the Patriots bench and kept his feet inbounds. Ahmad Bradshaw scored on 6-yard run with 57 seconds left in the 21-17 win. The defense knocked down Brady's desperation pass on the final play.

2007: The first meeting to finish out the 2007 regular-season schedule. The Patriots looked to finish off the first 16-0 regular season in NFL history and the Giants nearly ruined it, building a 28-16 lead in the third quarter on Manning's third of four TD passes. Laurence Maroney ran for two TDs and Brady had a go-ahead tally with his 50th TD pass of the season, a 65-yarder to Randy Moss. Manning hit Burress to close the gap to 38-35 with 1:04 to play but Mike Vrabel recovered the onside kick to ice it.

2011: Like '07, the teams also met in the regular season. The Giants denied the Patriots another form of perfection. Manning threw two touchdowns in the final 3:03, with a 1-yard winner to tight end Jake Ballard with 15 seconds left. The 24-20 final score on Nov. 6 in Gillette Stadium ended the Patriots' 20-game regular-season home winning streak. Brady and New England had taken the lead with a 14-yard TD pass to tight end Rob Gronkowski with 1:36 left.

1990: The Giants closed out a 13-3 regular season with Jeff Hostetler again starting for the injured Phil Simms. He threw a touchdown pass to Dave Meggett, and Matt Bahr kicked two field goals for a 13-10 halftime lead. There was no second-half scoring. The Patriots finished 1-15, losing their final 14. The Giants beat Buffalo 20-19 in the (wide right) Super Bowl. Coach Bill Parcells resigned after winning his second title. Ray Handley replaced him.